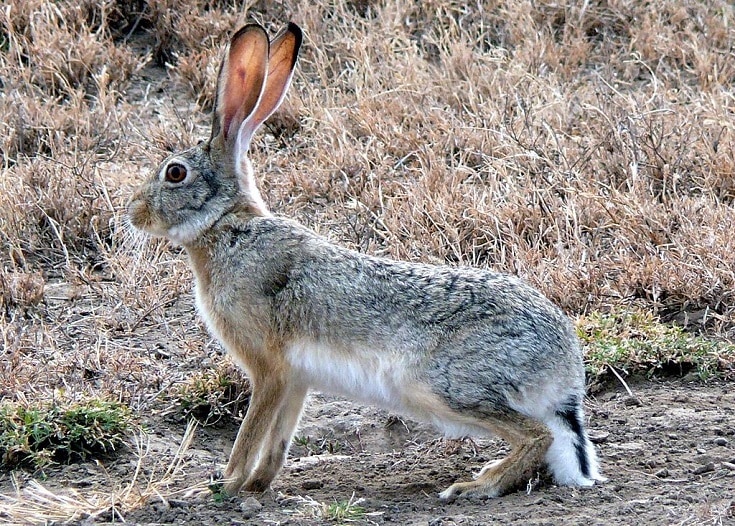 The Cape Hare, also commonly known as the Desert Hare, is native to Africa, Arabia, and India and mainly inhabits grasslands and semi-desert areas. They are fairly typical of most other wild hares, with light brown coloring, long and well-developed legs, and large eyes and ears.

In this article, we look at interesting facts and the typical behavior of these animals, as well as how to care for a Cape Hare if you keep one as a pet. Let’s get started!

The Cape Hare is a fairly solitary animal and can be found in the wild, mainly roaming in the open grasslands of their natural habitat.  They are nocturnal animals, meaning they are most active at night and rest or sleep during the day. These animals are known for their high-speed capability while running and can achieve speeds at a full run of up to 48 m/h! Besides their incredible running abilities, they are extremely athletic in other ways and are known to be excellent swimmers and climbers.

Their large, round eyes are capable of covering a 360-degree field of view, and this visual acuity combined with their high speed and dexterity make them a difficult animal to catch! Interestingly, these animals rarely sleep for more than a minute at a time during the day and rarely, if ever, enter deep sleep. You can often see them resting, though, and when they feel safe, they will gently shut their eyes for a small nap.

How Much Do Cape Hares Cost?

Hares have not been domesticated, so it’s almost impossible to find a breeder, especially in the United States, where Cape Hares are not a native species. This makes costs widely varying and difficult to estimate, as it completely depends on where and how the Cape Hare was obtained.

Cape Hares are largely nocturnal and solitary animals and will only be joined by another Hare during mating season. Hares are prolific breeders, and females can give birth to up to eight litters of two offspring each per year! While they are highly adaptable animals that can be found in a wide variety of terrains, including forests, cultivated fields, and marshes, their preference is for dry, open grasslands.

These animals are fast and athletic, and in addition to high top speeds, they can also leap up to 8 feet forward and almost as high! Males are known to fight before reproduction in the spring and will chase each other and stand upright for ritual boxing matches!

Cape Hares are fairly typical in appearance — the classic description of a wild rabbit or hare. They are larger than rabbits or domesticated bunnies, with long, slender, muscular bodies and powerful hind legs that are used for running, jumping, and climbing. They typically have brown fur with black specks and often a grey/white undercoat, inner legs, and belly. They have a large, oval-shaped head with long propeller-shaped ears and large, round eyes.

How to Take Care of Cape Hares

Since Cape Hares, or any other breeds of Hare, are rarely kept in captivity, there is little known about their needs. That being said, they will need a large enclosure to run around in, as they are highly athletic animals. The minimum recommendation is around 40 by 50 inches, but in our opinion, this is only suitable for short periods, like for transportation.

Cape Hares are far larger and far more active than rabbits or bunnies, despite their similarities, and as such, the standards for bunnies or rabbits cannot be simply applied to Hares. They’ll need a large enclosure with a closed top, as they are experts at jumping and climbing, and this enclosure should be equipped with a small water source big enough for them to bathe or swim in, small shrubs, sand for them to burrow into, and small trees to climb.

Do Cape Hares Get Along With Other Pets?

Cape Hares are solitary animals that will not do well being kept with other pets, not even rabbits, bunnies, or other Hares. They are known to be highly territorial, especially males, and will engage in ferocious fighting in order to maintain their turf. For this reason, they are best kept alone in their own enclosure, away from dogs, cats, and other animals.

What to Feed Your Cape Hare

In the wild, Cape Hares will graze and browse on whatever small shrubs and plants are available in the area. They are primarily herbivorous and feed on plants, grass, vegetables, berries, and even some types of mushrooms. In captivity, you should aim to replicate this diet as closely as possible. Commercial rabbit food is great, with occasional fruits and vegetables too.

Interestingly, the Cape Hare practices coprophagia — the ingestion of their own feces. Because Hares have fairly simple digestive tracts, a large percentage of their droppings are not fully digested and still contain essential nutrients. Hares will often feed on their droppings to obtain these leftover nutrients.

In the wild, Cape Hares rarely live beyond one year, and very few live for up to 5 years. Cape Hares are robust and healthy animals, though, and this low lifespan is largely due to predation.  In captivity, they have no predators, and there are examples of individuals living beyond 10 years. As long as they have sufficient space to exercise their natural instincts and eat a healthy and varied diet, Cape Hares in captivity have few health issues and should have a long lifespan.

Cape Hares are prolific breeders. During mating season, which occurs from January to June, mating activities typically occur in the early morning or late afternoon. Females have a gestation period of around 42 days and will usually raise two to four litters of one to six babies, or leverets, per year, although they can have up to six litters a year at times. Both males and females will reach sexual maturity at 6 or 7 months old, at which point, they can begin breeding.

Is the Cape Hare Suitable For You?

Cape Hares, or any other species of Hare, are not really suitable as pets. They need a very large enclosure to stay happy and healthy and are exceedingly difficult to tame. Hares have not been domesticated and are typically not bred in captivity, making them exceedingly difficult to find as pets. If you do find one, be sure to do a thorough background check to find out the source of the animal.