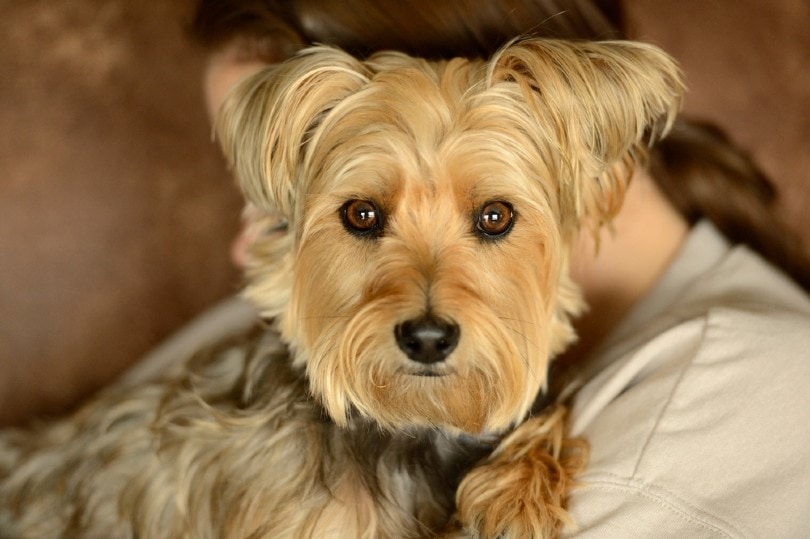 The Carkie is a mixed or cross breed of two purebred parents, the Cairn Terrier and the Yorkshire Terrier. She is a small cross with a life span of 12 to 15 years also called the Carkie Terrier or Carkie Dog. She is talented in competitive obedience, tricks and agility and is a very social and excitable little dog.

Where does the Carkie come from?

The Carkie does not have much available information on where it was first bred and why though a lot of designer dogs were first bred in the US. Over the last couple of decades the increase in attention being given to these so called designer dogs has lead also to an increase in bad breeders and puppy mills also churning out dogs. There is a lot of difference between a dog from a good breeder who checks out lines and puts thought into their breeding and ones who take no care at all. It is important you avoid the latter. Here is a look at the parents of the Carkie to get a better feel for its background and how it might develop.

The Carkie is an intelligent, very energetic and lively dog. She loves people being around her, giving her lots of attention, she can over excited in fact. She is alert and playful and is not happy being left alone for long periods of time. She can suffer from separation anxiety. She bonds closely with her owners and as playful as she can be she also loves to cuddle at the end of the day when it is time to relax. She does have a tricky stubborn streak though so make sure she does not get used to getting her own way all the time!

This is a small dog weighing 10 to 15 pounds and standing 8 to 12 inches tall. It has pointed and erect ears and some can have tails that are long and curl. Its coat is medium to long in length, straight and soft. Common colors are blonde, cream, black, brown, golden, white and chocolate.

How active does the Carkie need to be?

The Carkie is very active despite being such a small thing so it will need plenty of activity though that might not amount to too much compared to a larger active dog! She will get some play time indoors but will also need daily walks, twice a day, 15 to 20 minutes each ideally. Her size means she is fine living in an apartment or small space as long as you take her out for this. If there is a yard, that is a bonus but make sure it is properly fenced in. She likes to explore and she is fast so it may be a good idea to have her on a leash before you open the door for walk time or she may just head off! Time at a dog park where she can play and have off leash run time and socialize is also a good idea.

She is moderately easy to train so it will be a gradual process but it will not be too prolonged or painful. She tends to listen and obey but can have a stubborn side. House breaking is easy and all training techniques should be kept to be positive, offer treats, encouragement, praise and rewards. Remember key to any success is that she knows you are the boss, not her. Be firm and consistent but be fair with her. Keep up with early socialization too. This is the best way to have a dog you can trust who is confident and happy even when new people, children or dogs are around or when in new locations.

Having a coat that is medium to long in length means it will need daily brushing to keep the knots and debris out, and it will need regular trimming unless you opt to have the coat kept shorter. This means she will need trips to a professional groomer at regular intervals. It is important to only give her a bath when she needs one and to use the right shampoo. Otherwise you could end up drying out her skin and cause skin problems. There are some oatmeal conditioners and medicated shampoos that would work. Trimming will be needed around her eyes, ears and nose.

She sheds a moderate amount so there will be loose hair to clean up. She should also have her teeth brushed at least two to three times a week and her ears should be cleaned and checked for infection once a week. When her nails get too long they should be clipped, if you cannot do this, have the groomer do it for you. Be warned dog nails do have nerves and blood vessels in the lower part so care has to be taken not too low down.

How good she is with children can depend on which parent she is more like. Some are less happy around them as they are very possessive of their owner and may be jealous of the attention the kids gets. Some though are happy to play and are very affectionate with them. Make sure she is well socialized just in case. With other animals she is friendly if she is raised with them but again socialization is needed. She can be less happy around dogs of the same sex, especially not neutered males.

Some are reported as quite alert and some not as much. If you really want an excellent watchdog another small dog may be a more reliable option. She barks rarely and should be fed ½ to 1 cup of a good quality dry dog food each day, split into two meals. Make sure food is measured and exercise is daily so that she does not gain weight.

Costs involved in owning a Carkie

A Carkie puppy can cost between $200 to $800 depending on where you buy and who from. Other initial costs will include medical concerns such as vaccinations, blood test, physical exam, deworming, spaying and micro chipping. This will come to about $280. Initial items needed like leash and collar, bedding, bowls, crate and carrier are going to be about $120. Annual medical needs for basics like flea prevention, shots, check ups and pet insurance come to $435 to $535. Non-medical needs like grooming, treats, toys, food, training and license come to about $535 to $635.

Looking for a Carkie Puppy Name? Let select one from our list!

The Carkie is a great dog and could fit in easily to a home with most kinds of owners. She needs a certain level of attention but it is important not to over spoil her and let her think she can order you around or she can become a handful. Make sure she has a good level of training and socialization and you will have a dog you can trust and love who will adore you right back.