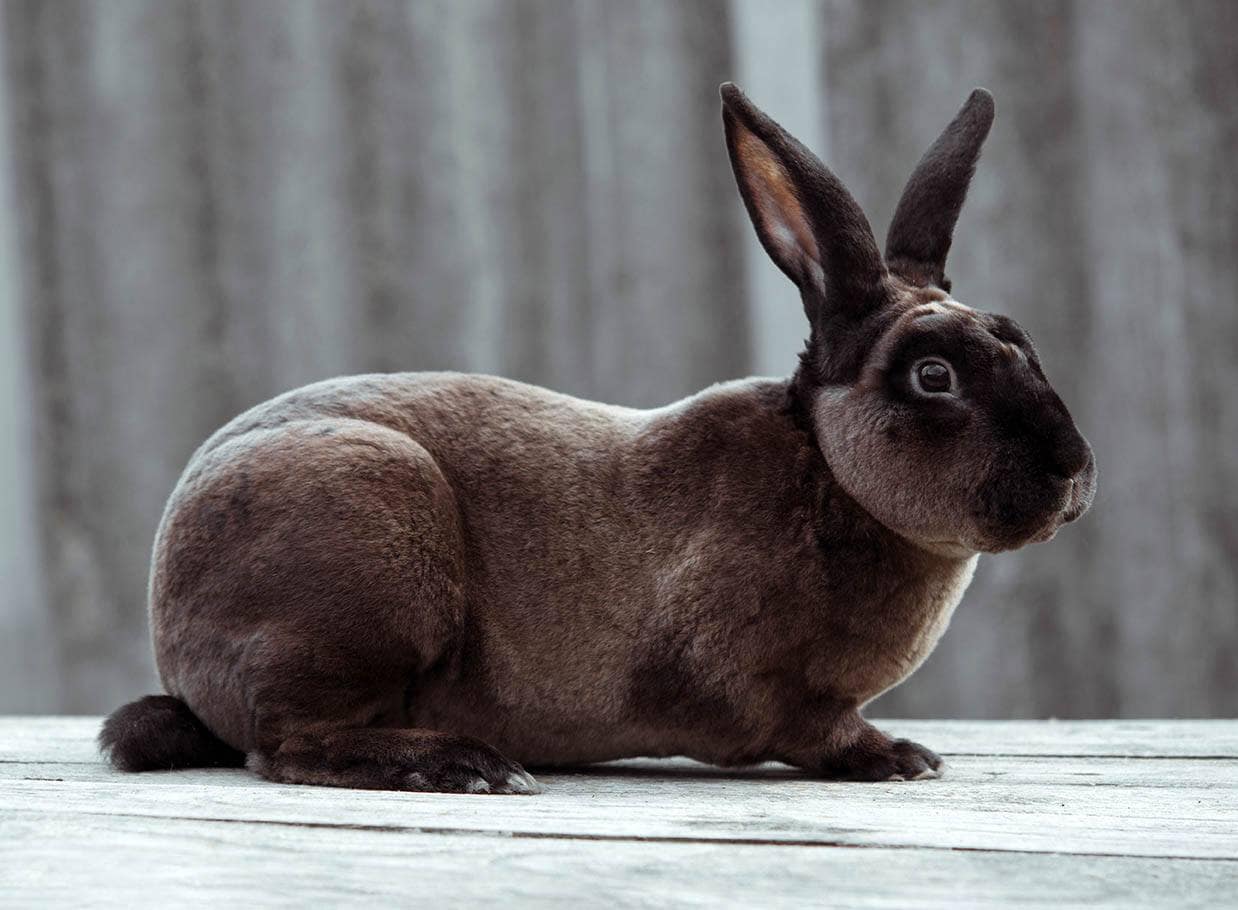 The Castor Rex Rabbit, now known simply as the Rex Rabbit, was first bred in France at the beginning of the 20th Century. The name originated from the Latin words for Beaver or brown (Castor) and King (Rex). The breed is considered intelligent, active, and they do have a calm side. This makes them a good choice for a family pet, and while the original breed was named for being the color of a beaver, Rex rabbits are now available in a huge array of colors from black to white and lynx to otter.

The Castor Rex Rabbit was first bred in 1919 when a French farmer noticed a genetic mutation in a litter of wild grey rabbits. This caused the luxurious and thick coat that the Rex is known for. With the assistance of a local priest, who was an experienced rabbit breeder, he intentionally bred the Rex.

In 1924, the Castor Rex, named for its Beaver color and its Regal coat, was introduced at the Paris International Rabbit Show. He became popular straight away and is now popular across the world, including in the US, after having been exported from France.

The Rex mutation occurs in a variety of animals, obviously including the rabbit. The Rex genes cause hair to grow differently. In the case of the Rex Rabbit, this means that it grows outwards instead of flat, and the guard hairs and undercoat are the same length. This mutation leads to a velvety, silky smooth hair that is similar to that of a thick pile carpet.

In the natural world, The Rex mutation is rare because if a Rex crosses with a non-Rex it results in a non-Rex. Both breeding rabbits must have the Rex gene, for that gene to be passed on. Although rare, there are deliberate breeding plans that are designed to continue the Rex line, because this breed offers a lot of benefits to the pet owner. As such, it is quite a commonly bred rabbit.

How Much Do Castor Rex Rabbits Cost?

The Castor Rex rabbit costs between $20 and $60, which is roughly the same as the average price for a domestic rabbit. When buying one, ensure that you buy from a reputable breeder. You should be able to meet one or both of the parents, and potentially some of your rabbit’s siblings, to get a better idea of the likely character that your Rex will exhibit.

Because of the relatively low cost of the Rex, you will find Rex Rabbits in shelters and local sanctuaries. The cost of adoption can vary but will not usually be more than $10 to $20.

As well as being very maternal, the Castor Rex is considered calm and playful, energetic when young, but a relatively quiet rabbit when mature. The breed enjoys the company of other rabbits, so these can be kept in groups or families, although you must ensure that they are properly sexed and that you keep the different sexes apart. Their energetic behavior makes them popular with children, as they will hop and bounce around, seemingly playing with their infant companions.

Thanks to their comparatively high intelligence, the Castor Rex can be trained, or at least house trained. House training your Rex means that he is better equipped to live in the house with you. You can also walk a Rex on a leash, with practice and training.

The fur of the Castor Rex Rabbit is its most distinguishing feature, and this is down to the fact that is guard hairs are shorter than in other rabbits. This gives it a velvety feel.

The Rex has a broad head and round body. It will usually weigh up to 12 pounds, although a miniature variety weighs half as much.

Both the standard and mini can come in a variety of colors, although obviously, the Castor Rex is strictly only a Castor, or Otter, color.

How to Take Care of Castor Rex Rabbits

The Rex is a docile breed that will do best when kept indoors. They appreciate plenty of space, can live together, and they can make a loving and friendly pet with regular socialization. You do have to provide everything your rabbit needs to flourish.

Can Rex Rabbits Live Outside In Winter?

Like other breeds, the Castor Rex Rabbit is equipped to live outdoors. They can cope with very cold temperatures, but to live outside, you must be able to keep them dry by offering protection on three sides and ensure that they are protected from the wind and rain when in their hutch. Rabbits can get seriously ill if they get wet, and potentially even die, so this must be avoided.

The minimum hutch size for a Castor Rex should be six feet long and 2 feet wide. This gives your rabbit room to move around, fully stretch out, and eat and hop about without bumping into the walls. You should also provide a run of 32 square feet for it to run around and play in. This should have a suitable fence and should also be dry. Your Rex will appreciate a decent hiding spot, so offer a covered area where he can go to get away from the world. Also, if you provide a litter tray, there is a good chance that your rabbit will use it, and this can help you litter train your Castor Rex, too.

The floor of the hutch should be covered in about 2 to 3 inches of bedding. Bedding can include straw, shredded cardboard, and paper. Do not use pine or cedar shavings, as these can cause respiratory problems.

Do Castor Rex Rabbits Get Along with Other Pets?

The Castor Rex is considered a docile and friendly animal. It may be quite lively during the first few months, when still young, but once this stage passes, he will be a quiet little pet. For this reason, the Castor Rex is a good rabbit for getting along with other pets. The Rex is one breed that will usually do better when living with other rabbits of the same breed. If it becomes lonely, your rabbit may become depressed and ill.

Remember that the doe is maternal, and can be quite persistently mothering of small rabbits. Because the Rex is less prone to darting away than other rabbits, they may not attract the attention of predatory dogs and cats, but you should always take care when introducing them to animals with any prey instinct.

What to Feed Your Castor Rex

Feeding your rabbit means trying to emulate what it would eat in the wild. Feed your Rex 90% hay, which is the same as the grass and haylage that it would eat in the fields. 5% of its diet should consist of high fiber pellets, which help ensure a healthy gut as well as a feeling of fulness. The rest of their diet can be made up of fresh produce, including vegetables and some fruit. Your rabbit should always have access to fresh water whenever it wants it.

A post shared by Walter The Rex Rabbit (@waltertherexrabbit)

Ensure that you give a balanced diet, provide fresh water, and keep your rabbit out of the rain and inclement weather. You can also exercise it regularly, by putting it in the large run.

The breed does not require much grooming. They are generally clean and tidy animals. Too much brushing could cause damage to their fur. If your Rex needs cleaning, use a warm and damp cloth to clean the area, and then ensure that you dry them fully.

If you intend to breed Rex rabbits, you will need two breeding Rex parents. If you cross a Rex with a non-Rex, you will get a litter of non-Rex rabbits. Both parents must have the Rex gene.

Rabbits are known for their capability to breed and produce a lot of offspring. This is important because they are prey animals, so having a lot of offspring helps ensure the survival of the species. It can be a little trickier breeding rabbits in the wild, but persistence and a little knowledge, as well as good stock, will help. Ensure that you do want to breed the rabbits, because they are the third most common animal in shelters, after cats and dogs. There isn’t a huge demand for rabbits as pets, and you won’t be able to turn a significant profit by breeding them.

A litter size is typically around 7 kittens but can be as many as 15. If none of those kittens find homes, would you be able to keep and care for them all?

Are Castor Rex Suitable For You?

Rabbits can make excellent pets. The Castor Rex Rabbit tends to be healthier and happier when kept indoors and with one or more other Rex Rabbits. They enjoy the company of humans, too, and they are considered quite and fairly docile rabbits that are easy to care for. They do need a decent sized hutch and run, but they can be house trained, do not require regular bathing or grooming, and usually enjoy the company of all the humans in the house. They make a very good family pet.