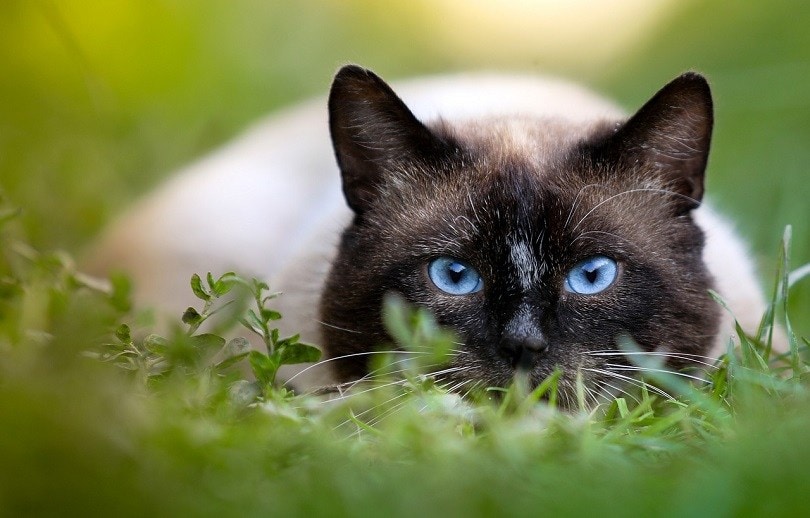 Cats with large, oversized ears look adorable, but those big ears actually have important evolutional functions. Your cat’s large ears act like satellite dishes to detect sounds that are inaudible to humans and help them successfully track down prey.

Large ears are also tributes to their wild cat ancestry and give domestic cats a somewhat wild look that is a beautiful sight to behold. There are a variety of aspects about a cat’s appearance that make them adorable: their soft coats, their large, endearing eyes, and their swooshing, expressive tails, but large, oversized ears are arguably some of the most adorable aspects of any cat breed.

In this article, we put together a list of 17 cat breeds with larger than average ears, so you can see them in all their glory. Enjoy!

The Abyssinian is a medium-sized cat with elegant yet strong and agile bodies and round, wedge-shaped heads. They are highly intelligent cats that are known to become attached to their human family and do not enjoy being left alone for long periods. They are playful animals that do well with children and retain this kitten-like playfulness well into adulthood.

The Bambino cat is an experimental breed that is the result of a cross between a Sphynx and a Munchkin. As they are a fairly new breed, not much is known about these felines, although there is a ton of controversy surrounding the breed, as they have an increased chance of health issues. The breed’s name, “Bambino,” means “baby” in Italian, and looking at their short legs and hairless appearance, it’s easy to see how they got their name!

A cross between an Abyssinian and various Jungle cat breeds, the Chausie is one of the largest domestic cat breeds, with an exquisite, wild appearance. As you might expect, these cats retain many of their wild cat traits and are extremely active animals that need a large amount of space to play and roam. They are also supremely smart animals and need a great deal of interaction and mental stimulation from their owners. Even with their wild heritage, they are known to form strong bonds with their owners.

With their characteristic soft, silky, and wavy coat, the Cornish Rex is a unique cat indeed. They love to be close to their owners and are highly social animals and make fast friends with strangers and other cats. They are also exceedingly agile, athletic, and playful cats with energy levels that can seem inexhaustible at times, making them great playmates for children. Their friendly, curious nature and beautiful appearance make them a popular pet worldwide.

The Devon Rex is a medium-sized cat breed, although they have a characteristically large, triangular head, a broad chest, and large, oversized ears. These, combined with their large, low-set eyes, give the Devon Rex the “pixie-like” appearance that they are so famous for. These cats are active, energetic animals that need a large amount of room to play, jump, and climb, so cat perches are a must for a Devon Rex owner.

Often also referred to as the Don Hairless or Russian Hairless, the Donskoy is a medium-sized feline known for their sparse coat — sometimes they are even completely bald. They are exceedingly loyal animals that are often likened to dogs in their dedication to their owners, and their friendliness and sociability make them a breeze to train. Because of their social nature, these cats do not do well when left alone for long periods and need plenty of attention and interaction.

The Egyptian Mau is one of the few naturally spotted cat breeds and is a medium-sized, muscular, and powerful animal. While they are active and strong cats, they are comparatively mild-mannered and even-tempered and make an ideal family cat overall. They are naturally great climbers and jumpers, so a dedicated cat tree is essential for an Egyptian Mau.

With their long, tubular body, triangle head, and large, low-set ears, the Javanese is as beautiful they are loving. They have exceedingly soft, short coats with medium-sized bodies, but they are far more muscular than their close cousins, the Siamese and Balinese. They are like their cousins in character, though, with an active and intelligent temperament and vocal nature. They are loving and affectionate animals that become highly attached to their owners.

In its country of origin, Thailand, the Korat is known as a good luck charm and is often bestowed in pairs as gifts. They are an ancient breed that is said to date back to the 14th century. They are highly intelligent animals that become attached to their owners to the point of becoming possessive — these cats are known to follow their owners around endlessly. This is likely the reason that they were traditionally given in pairs, as they do not do well when left alone for long periods and can quickly resort to destructive behavior.

Despite their wild appearance, the Ocicat does not have any wildcat genetics and is a friendly, loving, and playful breed. The characteristic spots of the Ocicat resemble an Ocelot, giving the breed their name. They are active cats that love human companionship and are playful cats that are great to have around children. While they are active animals, they are highly adaptable and can live happily in a variety of environments.

The Oriental is the close cousin of the Siamese cat, and the two breeds share many similarities in character. The Oriental is a highly talkative breed and is known to vocalize their every need in a loud and raspy voice. They are affectionate animals that form close bonds with their owners and are known to follow their companions around the home. They are also highly athletic and agile animals that love to play, making them ideal family felines.

The Peterbald is a “dog-like” cat known for their friendly and intelligent personality and their large, oversized ears. The breed originated in Russia and is a fairly recent addition to the world of hairless cat varieties, although among the five known varieties, only one is completely bald. They are slim, muscular cats that are known to be exceptionally sweet and affectionate, and just like dogs, they prefer to stay as close to their human companions as possible.

The beautiful Russian Blue is a friendly and affectionate cat, but not to the point of being clingy — these cats are independent and happy to do their own thing too. They are known for forming powerful bonds with a single family member and are fairly shy and wary of new faces. That said, they are known for being great family pets and will gladly play with children and other pets when it suits them.

A cross between a domestic cat and serval, the Savannah cat is one of the largest domestic cats in terms of height, as they have long, slender legs. These cats have powerful hunting instincts and are thus not ideal in homes with other smaller pets, such as hamsters or birds. They are mild-mannered felines that are playful and exceedingly loyal, making them ideal family pets, provided that they are socialized from a young age.

The gorgeous Siamese cat needs no introduction, as they are one of the most well-known and popular breeds on the planet. The Siamese is a long cat in every way — they have long, slender bodies, long legs, long tails, and of course, large, oversized ears. They are affectionate and attention-demanding animals that require a great deal of dedication from their owners, which is why they are best kept in pairs.

The Singapura cat may be small in size, but certainly not in personality. The Singapura is one of the smallest breeds of domestic cats, reaching only around 8 pounds in weight, but they are still well-muscled and surprisingly agile despite their size. They are curious, affectionate, and friendly animals that seem to thrive on being the center of attention and make a great family pet. That said, Singapuras do not enjoy loud noises and are easily frightened.

Most well-known for its coat or lack thereof, the Sphynx is a medium-sized, truly unique breed of cat. With their characteristic wrinkly skin, slender bodies, and large, oversized ears, they are one of the most recognizable breeds around. They are energetic and playful cats that love to be close to their owners and can be fairly demanding of attention. They bond strongly with their owners and are known to follow their human companions around the home just like dogs. Best of all, they are generally healthy and hardy cats that have relatively few health problems.