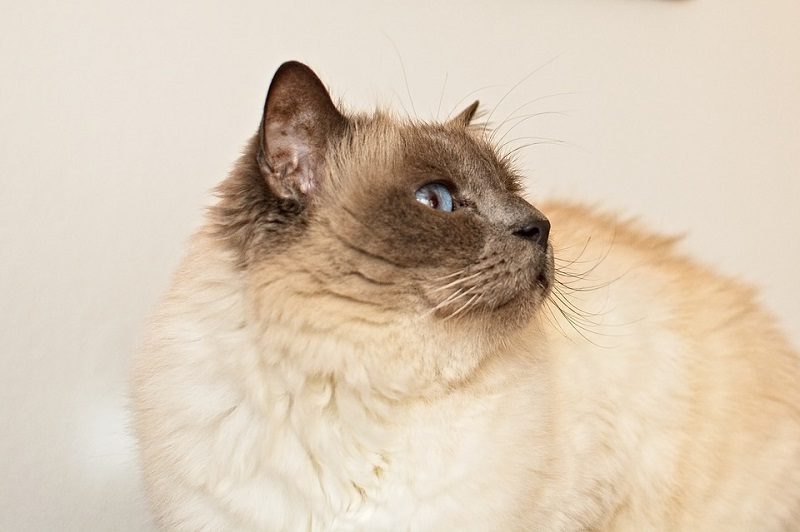 Cats have some of the most unique and beautiful features, both in physical attributes and character. Their eyes are a major feature, appearing in several colors including yellow, orange, blue, green, and copper. Some cats may even have two different eye colors!

The component that dictates the color of the iris is called melanin. The melanin should have both yellow and brown tones. When the cat lacks melanin, it results in blue eyes. Some kittens may have blue eyes but later change as they grow. If the cat matures for more than three months without the iris changing color, the color of the eyes will be permanent.

Balinese are a result of genetic mutation between other cats and pure Siamese. Their eye color will always be glossy blue.  Balinese are intelligent and very social with family members but can sometimes be noisy. Their tails are approximately one foot long, and males are always larger than females. Balinese come in different coat colors, including white, grey, lilac, brown, blue, and orange.

The name means “blue eyes” in Spanish. The breed was first found in New Mexico and has not spread much since it is still under development. It is a unique cat with a shade of deep blue eyes resulting from genetic variations. It is also safe to say that they are easy to maintain since they are short-coated.

The Birman is yet another pointed stunning blue-eyed cat. It doesn’t have a definite history but is believed to have come from crossbreeding Siamese and other cats imported from Burma. It has long hair and exists in tan, beige, and cream coat colors, among others.  The paws always have white patches. Birmans love children, older people, dogs, and even other cats.

It has long hair and medium-size with brilliant blue eyes. They are playful and very loyal pets to their owners.  It traces its origin to a wild cat called the Pallas cat. It has two layers of fur: the undercoat, and the outer coat, with various colors. Their double coating requires consistent grooming. They are friendly even to strangers and do not mind being left alone.

Ragdolls have big blue eyes with a variety of shades. It is the most laid-back yet charming cat. In fact, its name is derived from the fact that they seem to go limp when held. Most people compare them with dogs because they are intelligent and loyal. Ragdolls can even be taught to perform tricks. If you intend to keep one, ensure you create time and space to display its prowess.

They are also very affectionate and like being carried around and pampered. They thrive well with other pets within a homestead.

Had it not been for high maintenance, everyone would want a Persian! This longhaired cat has a personality as beautiful as its physical attributes. They have soft, silk fur and are the most famous feline breeds. The cats are loyal but do not loosen up to strangers. In exceptional cases, some can have different eye colors. They mingle comfortably with other pets and prefer quiet neighborhoods. However, all this sophistication and sassiness come at a cost. They require high maintenance.

The Snowshoe is a cross of the American Shorthair and the Siamese. They are beautiful family-oriented cats, existing in various colors, including black, tan, and brown. The felines have wide blue eyes, ranging from deep to pale blue, and unique white paws. These cats love company and pledge their loyalty to their primary caregivers.

Siamese cats are one of the most famous and charming of the cat breeds. It has an elegant body, and those almond-shaped blue eyes complement their pleasant personality. No wonder several hybrids have been stemmed from the Siamese. Interesting as it sounds, they are the most talkative cats. They prefer being indoors but with company since the felines are very playful.

It is among the oldest breeds, and for some time, they were considered sacred in Asian society.

The Javanese was developed by combining the Siamese, Colorpoint, and Balinese breeds. They have a delicate appearance but are actually quite strong as far as cats go. They are active and always curious to learn new skills and tricks.  They are also very loyal to the owners.

The Tonkinese is outgoing and full of life. They are also very playful and love company. It is a product of breeding between the Burmese and Siamese cats and shares many qualities with them. Their eyes are aqua blue.  These cats are also intelligent and have demonstrated to have sharp memories.

Blue-eyed cats seldom occur naturally. The feature is always a genetic mistake or a result of crossbreeding. People used to associate blue eyes with deafness, which isn’t always the case. If you suspect your feline’s hearing is impaired, consult you can confirm that by conducting a simple experiment. Stand behind the cat and clap. It should respond. If it doesn’t, get some help. Otherwise, those blue eyes are just beautiful features from the goddesses that they are.