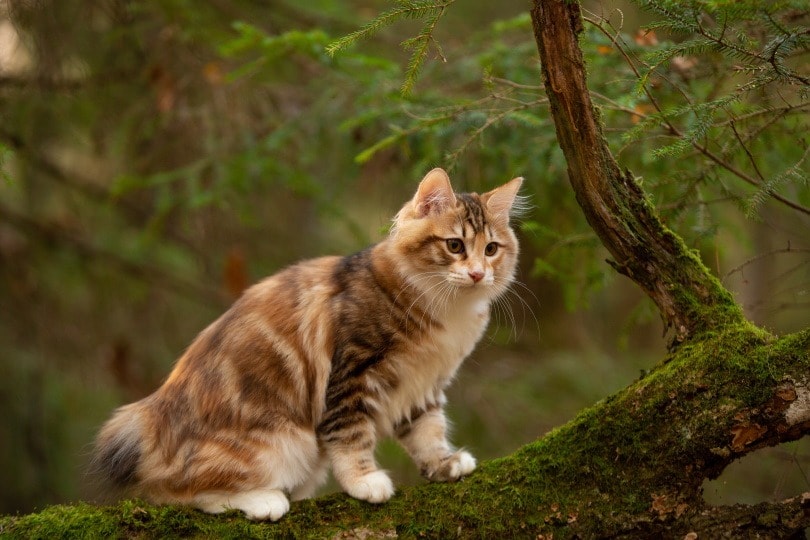 A cat’s tail is one of its hallmark features. You can tell a cat’s mood by its tail. Cats with tails use their tails for balancing acts. So, it may be odd to see a cat running around with no tail. You may think it’s been severed from an accident, which may be the case sometimes.

However, some cats are born without tails (or at least stubby, bobbed tails). These breeds usually started due to a natural genetic mutation when breeding, and typically on islands, strangely enough. Now, kittens get bobbed tails when they receive the bobbed tail gene at conception.

Technically, the Manx cat is the only cat breed without a tail at all. In this list, we have included cats with bobtails as well, to provide you with more well-rounded information.

Let’s learn more about the cat breeds with no tail or bobtails.

7 Cat Breeds with No Tail

Not only does the American Bobtail have a shortened tail as an indicator of its breed, it’s also sought after for its friendly personality. These cats are big, their muscles are thick and their fluffy coat makes them look big too.

The American Bobtail was bred in the 1960s when a couple took their bobtail cat and bred it with another bobtail street cat that they found. All the kittens were born with the same-looking tails, and today, breeding for this trait continues.

The Japanese Bobtail is the most common bobtail cat in its species. It has a smaller physique than the American Bobtail, and has a stubbier tail, more similar to a rabbit’s tail (also called a “pom”). Its roots go back to not only Japan, but also China, Tibet, and Korea.

Japanese Bobtails are typically calico, but they can also come in almost any other color. They were once feral in the streets of Japan, but are now recognized as an official breed all over the world.

There was once a legend that the Manx cat got it’s tail cut off because it was late for Noah’s Ark departure and got it’s tail stuck in the door.

The Manx, the only recognized, totally tailless breed of cat, hails from the Isle of Man between the countries of Great Britain and Ireland. Isle of Man inhabitants are very proud of this fact, and the Manx could probably be considered the country’s mascot! The Manx adorns the island’s currency, stamps, shops, and even company logos.

People love Manx cats for their looks as well as their personalities. They are stocky, muscular cats with short backs and a large jumping range.

Though they may look wild, these Pixie Bobs are all domestic, according to DNA testing. Pixie Bobs look strikingly similar to the American Bobtail, but they have shorter hair. They typically have tabby fur with various lengths of tail.

Instead of meowing, Pixie Bobs tend to make chirping noises. They are fairly mellow cats who love to be around people.

The Kurilian Bobtail’s heritage is in the Eastern Russian Islands, including Kamchatka, Sakhalin, and the Kuril Archipelago. These cats are strong, love hunting, and get along with other animals, even dogs.

They typically come in red, grey, and bobtail-striped colors. Like the Japanese Bobtail, the Kurilian Bobtail cats have more of a “pom” shaped tail. People love these cats for their sociable personalities.

Some cat breed associations refer to this breed as a longhaired version of the Manx breed. Cymric cats look much bigger than they actually are due to their long hair.

Cymrics, like Manx, can be born with a stubby tail or no tail at all. These cats are not bothered by too much activity, but you will want to interact with them regularly. They are playful and loyal to their owners.

A cross between the the Desert Lynx and the Jungle Curls, the Highlander cat looks wilder than it actually is. Highlanders used to be called… but their names were changed in 2005. They have a unique look due to their curled ears and of course their stubbed tail.

They make wonderful pets, although they are active have lots of energy. You will want to make sure they get lots of play time with you and your family. One unique feature of the Highlander cat breed is that they have an affinity for water and usually do not mind getting wet.

Cats without tails are sought out not only for their obvious physical uniqueness, but also their fun personalities. These cats are usually very sweet, friendly, and playful. If you choose to have a tailless or bobtail cat of your own, we hope our list was helpful for you in choosing the right breed for you and your family.