Chasing Problems in Dogs: Tips to Solve It! 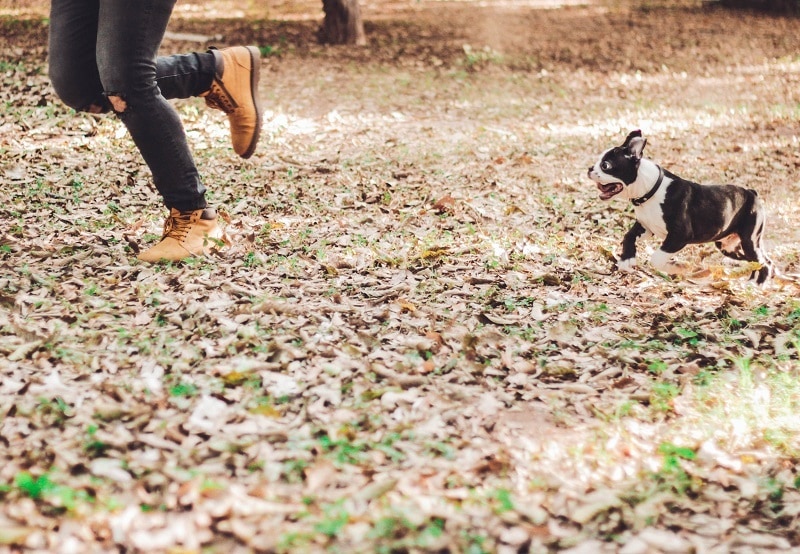 Some dogs run full speed after a rabbit or car the moment they see them and leave you in a huge cloud of dust and devastation. It’s stressful when your dog won’t stop chasing things. It leaves you running down the street looking like a maniac and worried that they’ll get lost or won’t make their way back. Some owners give up on fixing the behavior and restrain their dogs to leashes, cages, or inside their homes. After spending hours shouting, pleading, and luring their dogs back, we don’t blame you for being fed up with the behavior.

You might have been told that chasing is an obedience problem. This is true in some cases. But in others, the problem is rooted in their genetics. So, how do you find a solution to the problem? The key is understanding what the dog’s motivation is.

Why Do Dogs Chase?

Dogs have different motivations when they go chasing after something or someone. These influences could be because of fear, territorial, or social purposes. Because each motivation is so different, you have to identify and address each one individually.

More often than not, dogs that refuse to stop chasing are predatory chasing. Predatory chasing is typically exhibited towards a single target like cars, cats, rabbits, sheep, or skateboards. They actively search for opportunities to run after these objects and become overly excited the second they catch a glimpse or scent of their prey. Breeds with a history of herding or hunting are more likely to partake in this behavior. They aren’t usually scared or anxious about what’s in front of them. They’re addicted to the thrill of the chase and are stimulated by it.

The Drive of Dogs

You don’t have to teach a dog how to dig; their ancestors have been doing it for years, and it’s become an instinctual behavior for them. These instinctual acts are called motor patterns, and chasing is something that the dog is hardwired to do. Searching for, catching, and stalking prey were learned behaviors that helped the dogs survive, and the pleasure they get from it is internal reinforcement for them. Because it gives them pleasure, it’s hard to train them out of it with external support like treats or a pat on the head.

Some breeds and individual dogs have a higher inherited drive than others. Chasing after something gives them a high and the more they do it, the harder it becomes to break the habit. The promise of a treat isn’t as rewarding as the dopamine release they get from the chase, and that’s why most dogs often wind up locked in the house with pent-up energy.

The dogs with a lower drive to chase comply every once in a while, but they still crave an opportunity for this behavior, and keeping them chained up won’t work in the long term. Understanding why your dog is chasing things and behaving this way is crucial to controlling it. They aren’t deliberately disobeying us just to be a nuisance. Their internal urge is far more powerful than our demands, and they’re simply fulfilling that desire. Once we see it from their point of view, it becomes possible to manipulate their actions.

How to Deal with a Chasing Problem

Isolation is only a temporary fix. Because we are dealing with internal motivations, we are also interfering with their emotions. Temporarily denying these opportunities leaves them stressed and anxious and usually makes the problem worse. The first step to adjusting their internal motivations is to remove anxiety-inducing triggers and replace them with something good.

Manipulating your surrounding environment isn’t always easy. These stressors could be loud noises, social interactions, or separation issues. Trying to remove these from the environment and giving them more chew toys, walks, and calming pheromone sprays are reasonable first steps. These probably seem unrelated to chasing, but the less anxiety they feel, the less they’ll have to release those internal worries. When we remove some of the challenges they face, the need to dispel their anxieties reduces.

Controlling the Chasing Itself

Once you reduce the stressors in your dog’s life, start looking at how you can manipulate the behavior itself. You already have no control over the chasing, so adjust your course of action and change their primary target instead. Of course, you can’t always control a cat or rabbit either.

You can’t change the chasing through rewards or punishment. Scolding them only increases their anxiety and triggers them more. Instead, try to make adjustments in their schedule or surroundings. Put a fence around your yard, change the route you take them for walks on, or take them to a pond to swim instead. Your job is to minimize their exposure to the prey so that they stop associating them with fun.

Your dog already has a connection in its brain between the prey and the action of running. It is possible to take this mental connection and shift it onto a new prey object, like a ball or stick.

Start by playing with your dog and their new target indoors where they don’t have a lot of room to run and won’t associate the outdoors with the target they’d rather be focused on. If possible, by a toy that doesn’t closely resemble what their initial target was. If it was a rabbit, don’t buy a stuffed rabbit. Your goal is to break this connection instead of strengthening it.

Start by throwing the toy short distances for extended periods to build a new connection and weaken the old one. After a couple of weeks, move them to a larger room indoors or a small fenced-in area. Then work on teaching them to retrieve the toy and bring it back to you. Use positive reinforcement to encourage them to come back to your side when you call. This training method takes a lot of patience and dedication but should minimize their chasing after a few months. Eventually, their new commands bring more of a thrill than their past thrills, and the chasing should slowly subside.

Even if you consistently train your dog and break the connections with their prey, you have to understand that chasing objects is in a dog’s DNA. While we can manipulate the behavior, it isn’t always possible to eliminate it completely. As long as you notice an improvement, keep up the hard work and try to remain positive during the process.