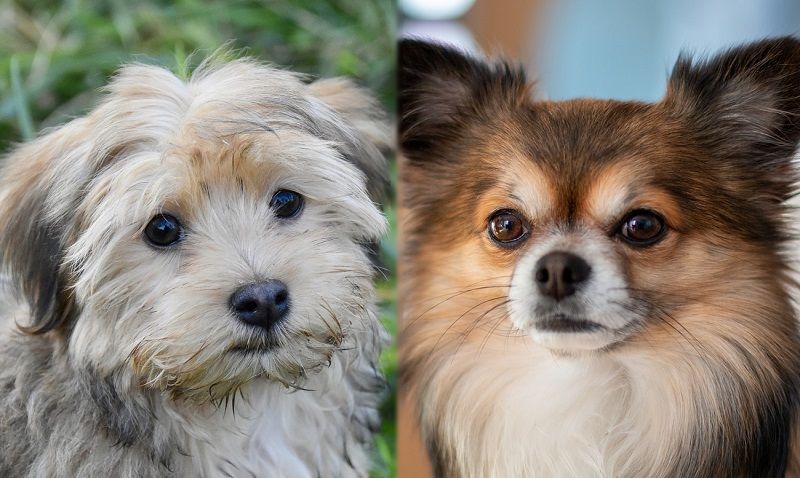 The Cheenese is a small cross of the Havanese and the Chihuahua. She is also sometimes called the Havahuahua and has a life span of 12 to 18 years. She has talents in agility and is a frisky, lively and friendly mixed dog.

Where does the Cheenese come from?

The Cheenese is not recognized by the American Kennel Club, only purebreds are recognized there. The deliberate crossing of two purebreds for the offspring it creates has grown in popularity over the last 30 or so years, becoming almost a trend in more recent years. They have been dubbed Designer dogs and have had a mixed reception amongst dog lovers because of the increase in bad breeding and puppy mills the trend in owning one has caused. Take care who you buy from and try to check out your local rescue shelters as an option to avoid adding to the problem.

Designer dogs are not always perfect blends of the best of both parents, despite what you might be promised. While some breeders may take care in the lines they use, a lot do not. You could end up with a puppy who has all the worst of both parents, or more likely a mix of the two. Even litter mates can be different in looks and personality. As with most designer dogs the Cheenese does not have information on where and why she was first bred but we can look at the parents to have an idea of where she comes from.

One theory on the origins of the Chihuahua says they were brought over to Mexico by Spanish traders from China where they were then bred with native dogs. The other says they descend from an ancient dog found in 9th century central and south America called the Techichi. Either could be true. In the 1850s the short haired Chihuahua was discovered in a Mexican state called Chihuahua, which is where the name comes from. They were brought to America in the late 1800s. The long haired variety is thought to be a result of breeding the short haired with long haired dogs like the Pomeranians or the Papillons.

When Cuba was claimed by Columbas in 1492 settlers from Spain began to arrive bringing with them small dogs, who then bred with ones on the island. The resulting breed developed into the Havanese. They became popular by the early 1800s with the rich in Cuba and then with the rich and noble in Europe. By the late 1800s their popularity had waned and they had disappeared from Europe. They were even rare in Cuba. When Cubans fled into America after the 1959 revolution some brought what remained and over the years it has been reestablished.

The Cheenese is a loyal and responsive dog. She loves to be social and interact with people but is also alert and could be a great family dog or companion. She can have an independent side to her but she her even nature means she is not overly challenging! She is smart and has a very happy and cheerful personality. She can be quite frisky sometimes and she does not like being left alone. She can be sensitive but is friendly and outgoing too.

This is a small dog weighing 4 to 16 pounds and standing 6 to 9 inches tall. She usually has a long, straight and silky coat which can be brown, golden, white, black, chocolate and cream in color. Her ears can be erect or floppy.

How active does the Cheenese need to be?

This is a fairly active dog despite being small she likes to be exercised regularly. She is of a size that is fine for apartment living and she does not require a yard. Having one though would be a bonus place to play. She would also enjoy visiting a dog park on a regular basis, it would be a place to play, socialize and be leash free. On a daily basis take her for a couple of walks a day on top of her indoor play time. Make sure she gets some mental stimulation too.

The Cheenese is a difficult dog to train so is not suitable for a first time owner. Experience, patience and consistency is the key with her as well as keeping it positive. You can always pay for training schools or professionals if you need some support in the process. Early socialization and training should not be neglected just because they are hard and time consuming. All dogs need them to be the best they can be.

There are a moderate amount of grooming requirements should you choose to get a Cheenese. When her coat is more like the Chihuahua’s she sheds a moderate or average amount so there will be loose hair in her coat that needs regular brushing, at least three times a week, and hair to clean up around the home and from clothing. If her coat is more like the Havanese it is low shedding and can hypoallergenic though that should be confirmed before purchasing if allergies are a concern. Whatever coat she has bathing should be done on a need basis not a schedule. Over bathing can damage the natural oils in her skin otherwise.

Her teeth should be brushed two to three times a week and her ears checked and wiped clean once a week. Her nails should be clipped as needed but care needs to be taken not to cut or nick the quick.

The Cheenese is not good with young children and is best raised in homes with no children or ones who are older. However if she grows up with the children she may be better with them. Early socialization will help a lot with this, and small children should be supervised around her. She gets on okay with other pets and dogs but again socialization really helps there too.

She can be alert and may bark to alert you of someone approaching. She does bark frequently so if you live in an apartment you need to check on the noise regulations when it comes to pets. She should be fed ½ to 1 cup of good quality dry dog food each day though that amount should be fed to her in two meals.

There are health issues she can inherit from her parents. They include Hypoglycemia, Collapsed Trachea, Hydrocephalus, Open Fontanel, Chondrodysplasia, Legg-Perthes, Eye problems, Deafness, Patellar Luxation, liver problems, Heart problems, Shivering and Joint dysplasia. If you are buying from a breeder and not adopting you can ask them to show you health clearances for the parents so that you are sure you are getting a puppy from two healthy lines. Also visit before buying so you can see the conditions she is being kept in.

Costs involved in owning a Cheenese

The Cheense can cost anywhere from $100 to $600. Prices vary depending on location, age, what else is being included and also how trendy that design dog is at the time. Other costs will be to get a collar and leash, crate, carrier, have blood tests done, deworming, shots, chipping and eventual spaying. These come to between $360 to $400. Yearly medical costs for just the basics like veterinary check ups, flea prevention medication, vaccinations and pet insurance come to between $435 to $535. Each year there are going to be costs for things like food, grooming, training, license, treats and toys. That comes to between $530 to $630.

Looking for a Cheenese Puppy Name? Let select one from our list!

This is a dog with some great qualities but she is best with a couple or a family with older children only and she does need owners committed to socialization and training. She is also prone to barking a lot. She can give the right owners a lot of love and entertainment if you have the commitment to offer her.

Can Ducks Eat Rice? What You Need to Know!