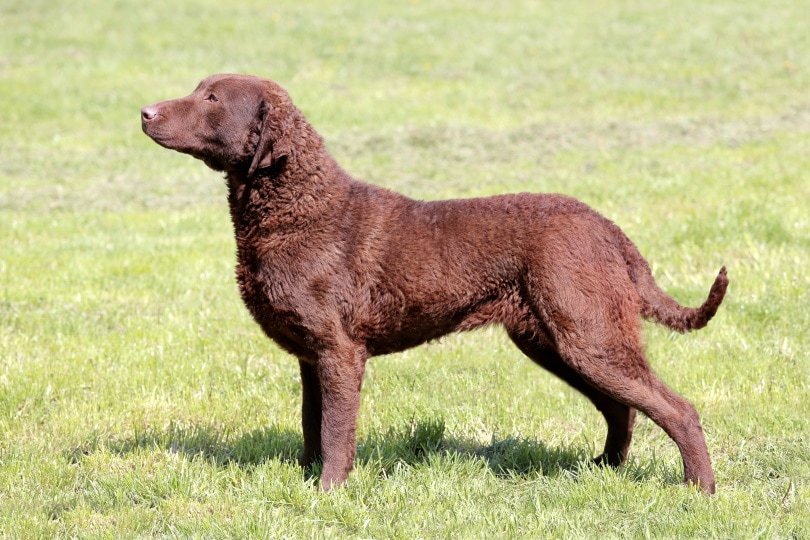 Members of this breed feature waterproof coats, boundless energy, and incredible swimming abilities. Plus, they’re tough as nails, making them the perfect cold-water retrievers. But some traits that make Chessies the perfect retrievers are traits that aren’t exactly ideal in a companion pet. They tend to be a bit territorial and somewhat aggressive. Plus, the breed has an independent nature that can make them difficult to train, so obedience training needs to start early.

Still, these dogs display lots of love for their owners and they’re wary of strangers, so they can easily be used as guard dogs or watchdogs. They’re protective and can even get along with children, but your Chessy will never be satisfied without an important role to fill. These are retrieving dogs at heart, and you’ll need to exercise their mental and physical faculties to achieve peak health.

Chesapeake Bay Retrievers are bred for one purpose and one purpose only: to retrieve waterfowl. As such, breeders prioritize traits that ensure the breed remains one of the foremost waterfowl retrievers in the world, and this means that specimens don’t come cheap. Granted, there are different levels of quality to choose from, and they span a wide range of prices.

At the lower end of the cost spectrum, you might $1,000 for a base-level Chessy from a reputable breeder. It’s rare to pay less for a suitable specimen. But you certainly could pay far more. Even for a basic Chesapeake Bay Retriever, prices range up to $1500.

If you’re looking for something a bit higher quality, then you should expect to spend substantially more. For some of the premium specimens, prices of $2,500 and up are common. Generally, these dogs have a proven pedigree and display the physical and behavioral traits that should contribute to making them some of the best retrievers on the planet.

Of course, adoption is always available as an alternative. Groups such as the Chesapeake Bay Retriever Relief and Rescue specialize in this breed, making it easy to find adoptable specimens anywhere in the US. Often, adopting is more affordable than purchasing a new puppy from a breeder, and it can even come with advantages. For example, your dog could already be fixed and it might have its shots, saving you even more money on the medical expenses you’d normally have to procure for a new puppy.

1. They Were the First State Dog

State dogs are a bit of a rarity in the US; only 13 states have one designated. Maryland was the very first though, making the Chesapeake Bay Retriever the very first state dog. Maryland started the trend in 1964, and Pennsylvania jumped on the bandwagon a year later. Of course, Maryland’s state dog is indigenous to the state, as the Chesapeake Bay Retriever originates on the shores of the Chesapeake Bay. Even though the Great Dane, Pennsylvania’s state dog, is not a native, Maryland’s precedent did stick, as most states with a designated state dog stuck to breeds that started in that state.

2. The Breed Began with a Shipwreck

The story of the Chesapeake Bay Retriever’s start is an interesting one, beginning with two dogs and a shipwreck. These two dogs, Sailor and Canton, managed to survive the shipwreck and swim to the nearby Maryland coast. In time, locals noted the two dogs’ incredible retrieving abilities and decided to breed them with local dogs, giving birth to a new breed, which was named the Chesapeake Bay Retriever in homage to where the breed began.

The late actor Paul Walker had a pet Chessy that he loved deeply. In fact, this dog accompanied him on the sets of many movies. During the filming of “Into The Blue,” director John Stockwell noticed the well-behaved dog sitting quietly in the corner and decided to give it a role in the movie. Thankfully, Paul’s dog was well trained and obedient, so it made the perfect pooch for a movie part.

Chesapeake Bay Retrievers are intelligent dogs that are bursting with energy. They have all-day endurance, but that means that they’re incredibly energetic when they’re not given a physically taxing job to fulfill. Members of this breed also tend to be pretty independent. While this is a great trait for a retriever, it’s not ideal for a companion pet, and it can make the breed difficult to train.

Naturally, Chessies are territorial and slightly aggressive. Regular socialization and training from an early age can help, but it’s part of the breed’s natural disposition. Still, they can be very friendly and even loving with family members. However, Chesapeake Bay Retrievers are almost always wary of strangers. Along with their alert and naturally protective nature, this helps to make them great guard dogs and watchdogs.

Chesapeake Bay Retrievers can be good for families, but it depends on the family. This isn’t the type of dog to make a loving, doting lapdog. They’re not big on lounging around, preferring to stay active all the time. And while the breed can be affectionate, they’re not overly so. However, the multiple members of a family may have an easier time keeping up with the excessive exercise needs of a Chessy.

It’s worth noting that if we’re talking about a family of hunters, then the Chessy will be a perfect fit. They’ve even been known to get along well with children, though it’s not a trademark of the breed. Their protective nature does make them good watchdogs for the family, though.

Chesapeake Bay Retrievers can find it difficult to get along with other pets. Males in particular tend to be aggressive towards other dogs. Females are often very territorial, especially after giving birth. But if you raise your Chessy with other dogs, they’ll usually get along just fine as adults. Without proper socialization from an early age, a Chessy is likely to be aggressive towards all dogs. Early socialization and training are essential with this breed if you want them to get along with other animals, and even other people.

Things to Know When Owning a Chesapeake Bay Retriever

Because this breed is highly susceptible to hip dysplasia, it’s recommended that you find food that contains plenty of glucosamine and chondroitin. Other joint supplements can help as well. If necessary, you can add these compounds supplementally to help reduce the chances of such joint conditions affecting your dog.

The hardest part of caring for a Chesapeake Bay Retriever is the excessive amount of exercise that you’ll have to provide. Exercise needs are high from an early age. Starting at just 9 weeks old, puppies need regular exercise of at least 20-30 minutes each day. Half-mile walks and additional exercise in the form of vigorous play are necessary for puppies up to 6 months. Dogs between 6 months and a year will need at least 40 minutes of fetch or some similar activity every day.

Puppies shouldn’t be jogging as it’s bad for their joints and bones, but starting at a year old, you can start jogging with your Chessy. At first, distance should be limited to a mile, though your dog will be able to handle considerably more with regular runs in their schedule.

For a mature Chesapeake Bay Retriever, at least an hour of exercise each day is required. These dogs have tons of energy, and if you don’t expend it, then they’ll likely become bored, which can lead to depression, destructive behaviors, and other unwanted issues. Chessies do best when given a taxing physical job to perform, such as hunting and retrieving, which is really what this breed is built for.

Training needs to begin early for a Chesapeake Bay Retriever. With proper training, they can make excellent dogs, but training a member of this breed will take lots of patience. They tend to be rather independent, which can make them hard to train. Be sure you don’t resort to yelling or anger, as these dogs respond poorly to such tactics and will generally become even more independent and less likely to listen in the future. Positive reinforcement works best, but you’ll need to work hard to keep the dog focused and engaged during training.

The Chesapeake Bay Retriever has a special double coat that’s waterproof. As such, it’s quite oily to the touch. It also requires quite a bit of upkeep. The topcoat is thick and short, but the undercoat is dense and fine. You’ll need to brush them out regularly to prevent matting and redistribute the natural oils. However, you don’t want to bathe your Chessy very often, as this can strip those oils from the coat and skin. They only need bathing once or twice each year.

Many purebred dogs, especially those with a pedigree as long as the Chesapeake Bay Retriever, are vulnerable to a myriad of health conditions. Thankfully, the Chessy is a very hardy canine, and there are only a few conditions that occur in the breed. Breeders take great care not to breed dogs that display these conditions, so their occurrence is usually pretty rare.

Most of the differences between male and female Chessies are the same differences you’d see in most breeds. Males are physically larger, and most of the heaviest specimens are male. Females are more territorial naturally, but males tend to display a bit more aggression. Of course, many of these differences are muted if you get your dog fixed.

Chesapeake Bay Retrievers are great dogs and can even be great pets, but they’re really intended to be cold-water retrievers, which is where the breed excels. They’re a bit independent and can be difficult to train, but that independence helps make them adept retrievers. You’ll also find them to be great guard dogs and watchdogs since they’re naturally protective, alert, and wary of strangers.

Be aware that this breed has a ton of energy you’ll need to expend if you don’t want a destructive or depressed dog. An hour each day is a minimum for adults. They’re happiest when they have a job to perform though, so they’re really best suited for hunters. If you’re in need of a retriever for pulling waterfowl from frigid waters, few dogs will fit the bill better. But if you just want a companion pet, then the Chesapeake Bay Retriever probably shouldn’t be the first breed you look at.