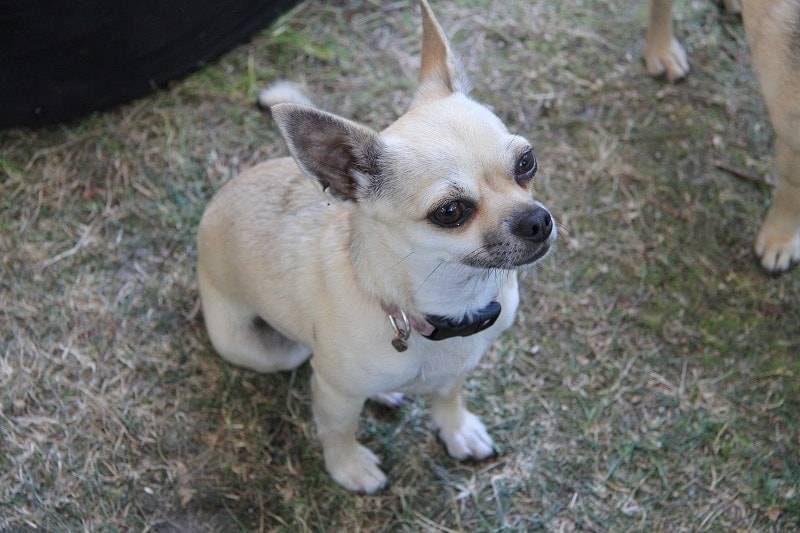 The Chestie is a toy sized cross of the West Highland White Terrier and the Chihuahua. She often takes part in agility events and has a life span of 10 to 13 years. She is also called either the Chiwestie or the Chi-westie. She is a warm and affectionate dog to her family but is wary and sometimes shy around strangers.

Where does the Chestie come from?

The Chestie is one of the newest deliberately bred mixed dogs, also being called Designer dogs. Most designer dogs are two purebreds crossed. Some are far more successful than others, some as a result of their popularity are more expensive than many purebred dogs, something that causes some division in the dog world. While there are some responsible breeders in this area of breeding, the money has attracted a lot of puppy mills and bad breeders that are absolutely to be avoided. Finding out information on their origins is not easy because many have no intent or design other than lets make a new one. To gather more information on where it comes from we turn then to what we know about its parents. Keep in mind when dealing with mixed dogs you could get any kind of mix of traits and looks from each parents, there is no way to control or make guarantees.

The Westie is thought to be a dog from the 1600s bred in Scotland. His purpose was to hunt vermin and other small animals. Other names he was known by was the Poltalloch terrier and the Roseneath terrier but at the start of the 20th century he was recognized by the English Kennel Club and given the name we have today.

He is a bold and smart dog who loves to have fun and be somewhat mischievous. He also loves to get affection and is a very happy dog. While he will enjoy some cuddles he is not a complete lapdog. He does have problems sometimes around larger dogs and he can have aggressive issues with dogs of the same sex, especially when it is female to female.

The Chestie is very affectionate and loves to cuddle with her owners, but while she can be lively and enjoys playing, she is wary and even shy around strangers. She can have an independent nature and she is intelligent. She is a very warm and loveable dog and makes a good companion. Sometimes she can have a bit of attitude to her personality. She does not like to be left alone either and is very sensitive.

This is a small dog weighing just 5 to 10 pounds and 8 to 10 inches. She can look like either the Westie or Chihuahua or be a mix. She can have erect or hanging down ears or even ones that are just folded at the tip. Her color tends to be white from the Westie but there can be a mix from the Chihuahua. The coat can be short to long and wiry or smooth and silky.

How active does the Chestie need to be?

She is a fairly active dog so will need a couple of daily walks out and about on top of her indoor play time. Her liveliness and intelligence means as well as needing physical stimulation she will also need toys and games and training that offer mental stimulation too. While some dog park shave size restrictions if there is somewhere where she can go as a treat to run off leash and play she would enjoy that.

Mostly due to her Chihuahua heritage she is difficult to train in many cases and therefore is not the best choice for a first time owner. Someone with experience is going to need patience and consistent methods all while staying positive, with encouragement, rewards, praise and treats as methods to engage her. There are professional schools and trainers that can be used if needed. Some owners may find her quick to train as she is intelligent, but others will come across her more willful side. Either way it is important to stick with it along with giving her the early socialization she needs too.

Living with a Chestie

She will have some needs when it comes to grooming but she is not especially high needs. Her coat should be brushed about three times a week to remove loose hair, keep it mat free and help move the natural oils in her skin across her body. She sheds a low to moderate amount so there may be picking up to so when it comes to loose hair around the home. Do not schedule her baths every week as this can dry out her skin. Just save them for when she really needs it and use only a dog shampoo.

Dental health is also important to stay on top of. Brushing at least twice a week is necessary if not more. She should also have her nails cut when they get too long but this is not a simple process so leave it to someone with knowledge if you are not experienced. Finally her ears will need to be checked weekly for infection and given a wipe clean, do not insert anything into the ear though.

When it comes to children she is very good with them but younger ones should be supervised just because she is a small dog and they might get too rough with her. Make sure the children are taught how to touch and play nicely with dogs. Some Chesties can need extra support in getting along with other dogs and pets so early socialization is a good idea.

The Chestie unfortunately is a vocal dog and will bark frequently and even howl often. If you do not want the noise or live where noise is an issue such as an apartment with strict regulations, you may want to look at other small dogs. She will need to be fed ¼ to ½ a cup a day of good quality dry dog food which is divided into two meals.

There are health issues she can inherit from her parents such as Patellar Luxation, Hypoglycemia, Heart problems, Open Fontanel, Collapsed Trachea, Hydrocephalus, Eye Problems, Westie Lung Disease, Craniomandibular Osteopathy, Legg-Calve-Perthes Disease and Shivering. Any dog has the potential to develop hereditary issues so the best course of action to take to lessen the odds is to ask the breeder to show you health clearances for both parents. Another way to ensure you are more likely to get a healthy puppy is to visit it before buying.

Costs involved in owning a Chestie

The Chestie puppy can cost between $250 to $500. Other costs come to between $360 to $400 for things like blood tests, deworming, shots, chipping, spaying, a crate, collar, leash and carrier. Annual medical basics like pet insurance, vet check ups, vaccinations and flea prevention come to between $435 to $535. Other annual costs for basics like food, toys, license, training and treats come to between
$265 to $365. If your Chestie happen to be a long haired version she will also have regular grooming needs on top of that.

Looking for a Chestie Puppy Name? Let select one from our list!

The Chestie is a lively and vocal companion who could be good for a couple, single owner or family. While active she is small so her exercise needs are easy to meet even for less active owners. Be prepared for a harder time when it comes to training though and make sure you can commit to that and the early socialization.