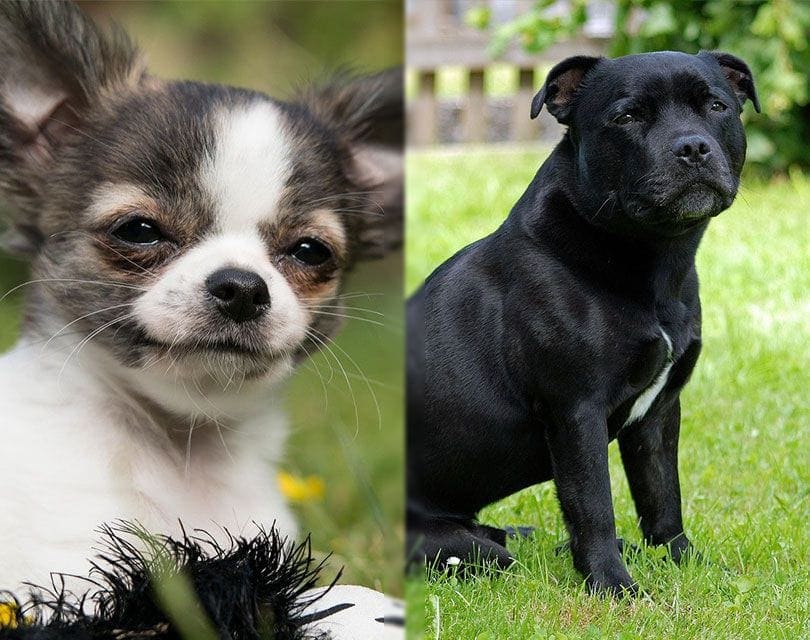 The Chi Staffy Bull is a cross of the Staffordshire Bull Terrier and the Chihuahua. Also called a Chihuahua/Staffie Mix he is a small mixed dog with a life span of 10 to 15 years. He is a courageous dog who is very loving and great with kids but needs to be well socialized so he is not aggressive towards other dogs.

Where does the Chi Staffy Bull come from?

The Chi Staffy Bull is a deliberately bred mixed dog, which is not the same as just a mutt according to fans of these now called Designer dogs. And that is true when good breeders are involved as care would be taken over things like the lines the parents come from. However in this market there are a large number of breeder with no experience or knowledge, and plenty of puppy mills who are in it just for the money. It is important to check who you are buying from and spend time finding a good breeder so that you are not funding these places.

With most of these dogs we have no history or information on where they come from specifically. Many are created in the U.S but some also come from elsewhere. Some have a lot more popularity than others and have very high price tags on them because they are a current popular trend. When looking at the Chi Staffy Bull we can look at the parents to get some better understanding of him.

This dog is related to the Bull Terrier, American Staffordshire Bull Terrier and the American Pit Bull Terrier as they all come from the Bulldog. It was developed in the early 1800s to be faster and smaller than the Bulldog but to be good with people. When he came to the US he was used as a companion but was not recognized as a breed until 1975.

The Staffie, when he comes from a good breeding line and is well raised should be loving to people, not snappy or shy. He is energetic and loves life and is very alert all the time. He has a tough side and can be quite stubborn. He is very protective of his owner and family but less so of property. He has a curious nature and is attentive. He loves people and being a part of the family.

The Chi Staffy Bull is a good family dog who loves to be around the family and can be very loving. He is alert and protective, and that combined with his courage means he will act if the family is threatened. He is smart and friendly with other people and makes a great companion.

He is a small dog weighing 8 to 18 pounds and standing 10 to 12 inches tall. He has ears that can be erect or floppy with a straight coat that can be short, medium or long in length. Common colors are blue, brown, silver, black, white and red.

How active does the Chi Staffy Bull need to be?

He is a fairly active dog and will need a moderate amount of active daily to keep him healthy and happy. He would enjoy two walks a day and the occasional trip to a dog park where he can have some play time and off leash time. He can live in an apartment as his size means he is adaptable to it. Access to a yard though while not completely essential would be good for him to play and explore in. He will need some toys and activity that stimulates him mentally as well as physically.

The Chi Staffy Bull is difficult to train so is not the best dog for a first time owner. He is stubborn and can be willful but he is intelligent. A lot of patience will be needed and you may need to turn to professional help like a school or trainer you bring in. He needs consistency and a positive approach using praise, treats and rewards as a means to motivation. It is very important you stick with the training and you start early socialization to ensure he is a well rounded dog that can be trusted.

Living with a Chi Staffy Bull

If the dog has a short to medium coat he will need less brushing and grooming is easy. A long coat will need more regular brushing to keep out the tangles and remove debris. Brush him every over day as he is a moderate or average shedding dog so there will be loose hair to deal with. Bathing him will be needed but not overly often as that can dry out his skin. Use a dog shampoo when cleaning him for the same reason. His nails will need to be clipped when they get too long and since this is not a simple task if you are not familiar with dog nails, take him to a groomer or vet. Give his ears a check once a week to make sure there is no infection and wipe them clean. Also brush his teeth at least twice a week.

This is a good dog with families with children. He gets on well with them, will play with them and is loving and protective of them. He also should get on fine with other pets with a bit of help. But he can have problems with other dogs and early socialization is key to managing those problems.

He is an alert dog and should bark if someone tries to enter. He will act to defend the family should it be necessary. He barks occasionally and will need to be fed ½ to 1 cup of good quality dry dog food split into two meals a day.

There are parental issues the Chi Staffy Bull can inherit from his parents such as Patellar Luxation, Hypoglycemia, Heart problems, Eye problems, Collapsed Trachea, Hydrocephalus, Open Fontanel, Shivering, Joint dysplasia, skin allergies and demodectic mange. Ask the breeder to show you parental health clearances and visit the puppy to check its conditions before you buy.

The Chi Staffy Bull puppy will cost $200 to $500. Other costs will come to between $360 to $400 for things like a crate, carrier, collar, leash, deworming, shots, blood tests, micro chipping and neutering. Other yearly costs for basic medical concerns like vaccinations, check ups, flea prevention and pet insurance come to between $435 to $535. Essentials that are non medical each year like toys, food, treats, license, training and grooming come to between $540 to $640.

Looking for a Chi Staffy Bull Puppy Name? Let select one from our list!

This is a good dog but with the protective and bold traits of the Staffie he does need an experienced owner and one committed to socialization and training. Especially since he does not get on well with other dogs. With the proper raising though he is certainly loyal and loving and can be a great family dog.