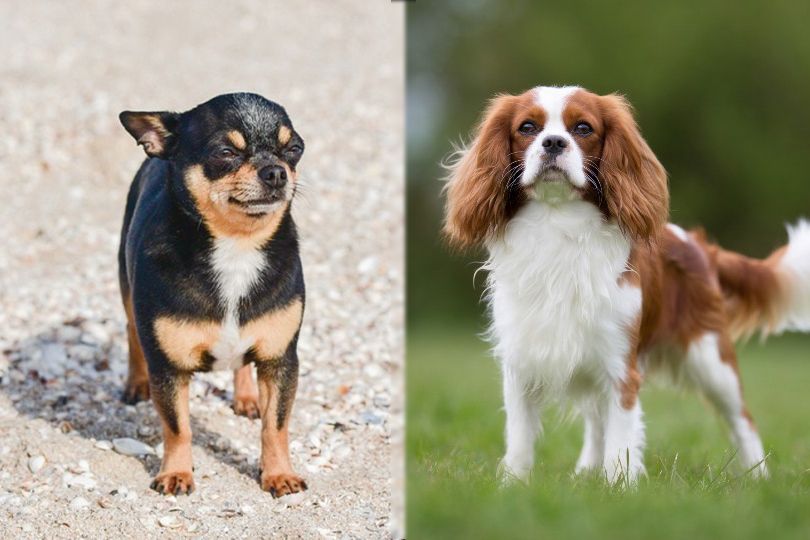 Where does the Chilier come from?

There are a large number of new so called designer dogs appearing in the dog world and the Chilier is one of them. A designer dog is a mixed dog that has been bred on purpose usually just the first generation offspring of two different purebred dogs. The popularity of having a mixed dog like this has exploded and the demand has led to many being bred but not all are being done by experienced or trustworthy breeders. There are a lot of puppy mills and breeders that should be avoided so do your homework.

Also make sure you understand that with a good breeder who has looked carefully at lines selected you can have more chance of having the better traits from both parents. But there are no guarantees with first generation offspring, they really could have any of each parent’s looks or traits. And with the less scrupulous breeders who do not think about lines or any of that, the results can be even more of a potluck.

The Cavalier is oddly an old and new breed. He was around centuries ago and can be found in old paintings from the 16th to 18th centuries but their popularity back then eventually fell and they were bred with other dogs. Recently, in the 1920s, some breeders decided to bring back that type of spaniel and were eventually successful. Interest was revived and the name Cavalier King Charles Spaniel was given to make him separate from the King Charles Spaniel (called the English Toy Spaniel in the US). The Cavalier was accepted as a separate breed in the 1940s.

This is a very friendly dog, to him there is no such thing as a stranger! He loves to sit on people’s laps and get lots of attention. When it comes to personalities it can really vary with these guys. Some are quiet, some are very outgoing, some are rambunctious and some are a lot more calm. Some may bark to alert you of someone approaching but some may not!

The Chilier is a very outgoing, friendly and extravert dog, enjoying everything social, being around family and being at the center of any activity. She is a brave dog with an independent side which means she can be willful and stubborn sometimes. She is intelligent and very loyal and is a good family dog or companion. She can be wary around strangers so socialization is important. Some can be more timid, and some more protective.

She is a small dog weighing just 6 to 12 pounds and standing 8 to 10 inches tall. She has a straight coat that can be short or long and silky. Common colors are silver, brown, cream, golden, white, tan and black. She can have ears that are hanging, erect or half folded and has the large eyes that both parent breeds have.

How active does the Chilier need to be?

She is fairly active so will need a moderate amount of activity a day to maintain good health and keep her happy. She loves to play and her size means she is well suited to apartment living and a lot of her indoor play can go towards her needs. Take her out for a walk or two a day as well and if she is allowed in (due to her size) take her to a dog park where she can go off leash and socialize. She can be energetic and with her intelligence as well as seeing she gets enough physical activity she also needs opportunities for mental challenge too. You may notice she sneezes when she gets excited!

While she is smart she can have an independent side so training in terms of difficulty can vary. This may mean she is not the best top choice for first time owners. Some owners find she learns quickly and have little issues with a stubborn side, others find a lot pf patience and consistency is needed a long with a positive approach. Early socialization and training are a key responsibility of all dog owners, it enables your dog to be the best they can be and makes things a lot easier for you.

She is a low to moderate maintenance dog so while some grooming is required she is certainly not a super needy dog. She sheds a moderate amount so there will be loose hair to deal with in the home and to brush out from her coat. Give it a brush every couple of days to keep up with the loose hair and to help distribute the natural oils around her body. Those oils and maintaining them is important so avoid bathing too often. Use a dog shampoo only and just give her a bath if she is smelling quite strong or has gotten herself into something! Her nails should be clipped if they grow too long and she does not wear them down naturally. Have someone with experience take care of this or read up about dog nails. Her ears should be wiped clean once a week and checked for infection and her teeth brushed at least twice a week.

Usually she is good with children and can be playful and affectionate with them. Sometimes you can get one who is less happy around them though. Smaller children should be supervised just because she is small and can hurt by accident easily. While she tends to be friendly enough with other pets she will chase smaller animals outside. Early socialization will help how she interacts with other animals and other dogs too.

The Chilier is unlikely to be a great watchdog, sometimes she will bark if a stranger approaches, sometimes she does not! She will bark rarely to occasionally and should be fed ½ to 1 cup of dry dog food a day. The food should be of a good quality to make it better for the dog and that amount should be split into at least two meals.

There are health issues she can inherit from her parents to be aware of. They include Patellar Luxation, Hypoglycemia, Heart problems, SM, Collapsed Trachea, Hydrocephalus, Open Fontanel, Episodic Falling, eye problems, Shivering and Hip dysplasia. You can have better chances at avoiding these by asking the breeder to show health clearances for the parents. Also really consider visiting the puppy before you buy as it is a very good way to judge the breeder and see the conditions the puppy is in.

Costs involved in owning a Chilier

The Chilier puppy can cost between $300 to $800. Other costs will come up for things like a crate, carrier, collar, leash, deworming, blood tests, shots, spaying and micro chipping. They come to around $360 to $400. Costs yearly can add up depending on the extras you might have to pay for like kenneling, dog walking and so on. Looking at just the basics the medical annual costs come to between
$435 to $535 for pet insurance, check ups, shots and flea prevention needs. Annual non-medical costs come to between $540 to $640 for things like grooming if she is long haired, training, license, food, toys and treats.

Looking for a Chilier Puppy Name? Let select one from our list!

This is a small dog full of energy and personality though you can find a lot of differences between one Chilier and the next. If you are looking for a dog to liven up the place she will certainly do that! She will be loyal and affectionate too just make sure you stick with the training and socialization, she would thank you for it if she could.