Chinchilla vs. Degu: Which Pet Is Best for You? (With Pictures) 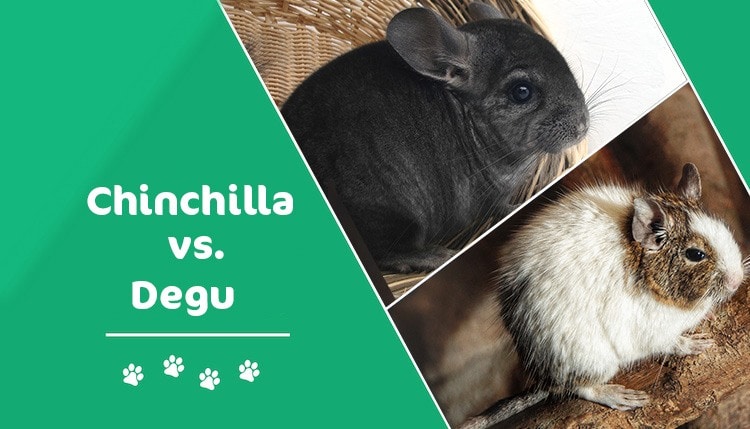 Chinchillas and degus are both small rodents that have become popular household pets in recent years. Although they are considered cousins, there are a few differences between the two that make them unique as pets. For example, chinchillas tend to sleep during the day and play at night, while degus sleep and night and play during the day.

Therefore, it is a good idea to learn about the differences, however slight, between these cousins before deciding which one to adopt as a pet for your household. Below, you will find all the information that you need to know about these cute animals and their differences.

Besides differences in sleep patterns and the fact that chinchillas are more independent and less affectionate than degus, there are a few visual differences to consider. First, chinchillas are bigger and can weigh up to 3 pounds, where most degus weigh in at under a pound when fully grown. Chinchillas have slightly longer bodies and fluffier tails than degus. Also, chinchillas have rounder eyes, while degus have eyes that are shaped more like almonds. Some people liken the chinchilla to guinea pigs and the degu to hamsters.

Chinchillas may be larger than degus, but they still do not get any larger than 19 inches in length or any heavier than 3 pounds overall. Unlike degus, chinchillas are mostly nocturnal, so they are not highly active during the day, and they need a quiet place to spend their downtime at night. While awake, chinchillas are curious and active. They enjoy climbing, jumping, running, and exploring new areas.

They would prefer to be watched rather than handled by humans, making them a hands-free pet that even young children can enjoy without the worry of proper handling. Chinchillas are intelligent and prefer to maintain a daily routine of sleeping, eating, and playing every day, which requires commitment from their human caretakers.

Chinchillas need 1 to 2 hours of vigorous exercise daily to keep them from becoming overweight as they get older. Like degus, they need large habitats to explore and run around in. An exercise wheel is a must, and some time spent outside of the cage is always appreciated. They do not need to spend time outdoors or undergo any special training to stay in shape. Access to space and interactive objects is all the support that they need.

Chinchillas cannot be trained like dogs or even cats, but they can learn to do a few things, like to come when they are called, sit on a shoulder, and use a litter box. They can also be taught to stop bad behaviors that make them susceptible to injury or illness. Treats and positive reinforcement are necessary while training to ensure that these little rodents do not become afraid or untrusting.

Chinchillas are generally healthy and do not require much grooming to keep them clean as time goes on. They need access to dust for baths regularly, as degus do. There is no need to brush or bathe them in water, and in fact, chinchillas should never be exposed to water baths. They will groom their own ears and nails as time goes on. Chinchillas should eat hay and grasses, which are available in commercial foods such as Oxford Orchard small animal feed. Dried fruit and root veggies can be offered as supplemental snacks throughout the week.

Chinchillas are suitable for most households if they have a safe, contained, and quiet habitat to live in where other animals cannot get to them. Because they are mostly habitat dwellers, they can get along happily in a small apartment or large house. It doesn’t matter if there is a yard to play in, like it would if you were to adopt a dog.

Degus are smaller than chinchillas, but they tend to have bigger personalities. These little rodents are cute and curious, making it fun to watch them run and play in their habitat. They are awake during the day and sleep at night, which means that they are easier to interact with than chinchillas are, especially for children who rarely stay up late into the evening.

These little animals can quickly get attached to their human family members if they are handled and interacted with daily. These are social pack animals and prefer to live with other degus rather than by themselves. They are easy to care for overall, making them a great pet option for younger kids and people who do not have much time for grooming, cleaning, and entertaining.

The degu is a frisky little animal and requires at least an hour of vigorous activity every day to stay happy and healthy. Therefore, their habitats should be large and feature multi-levels so they have plenty of room to explore and run around. They should also be provided with toys to interact with and a spinning exercise wheel to spend time on while inside their habitat. These little rodents can quickly and easily adapt to new environments, so it is a good idea to switch things up by taking things away and introducing new plants, toys, and furniture to their habitats occasionally.

The high intelligence of degus makes them easy (and even fun!) to train, although the process can take time, so patience is necessary. Your hands and voice can be used to train degus to do a variety of things, such as to come when they are called and to go back into their habitat when asked. Treats should be used during training sessions to keep them interested and engaged.

Degus are generally easy to care for. In addition to a large habitat to run and dig in, they should be fed a quality commercial food made for small rodents like degus, chinchillas, and guinea pigs. Fresh veggies can be offered as snacks and treats during training times. Clean, fresh water should always be available. They do need access to dust baths regularly, but otherwise, they take care of the rest of their grooming needs.

Degus are a suitable pet for people of all ages who can provide these little critters with a safely enclosed habitat to spend their time in. They can live in households with other animals but should never be let out of their habitat when the other animals are in the same room, to prevent accidental injuries or predator-prey situations.

Which Pet Is Right for You?

Chinchillas and degus are similar enough that regardless of which you choose, you will have a cute, friendly pet as part of your household. That said, degus are a bit easier to handle, so they might be better for families with younger children.