Chinchilla vs Hedgehog: Which Pet is Best for You? 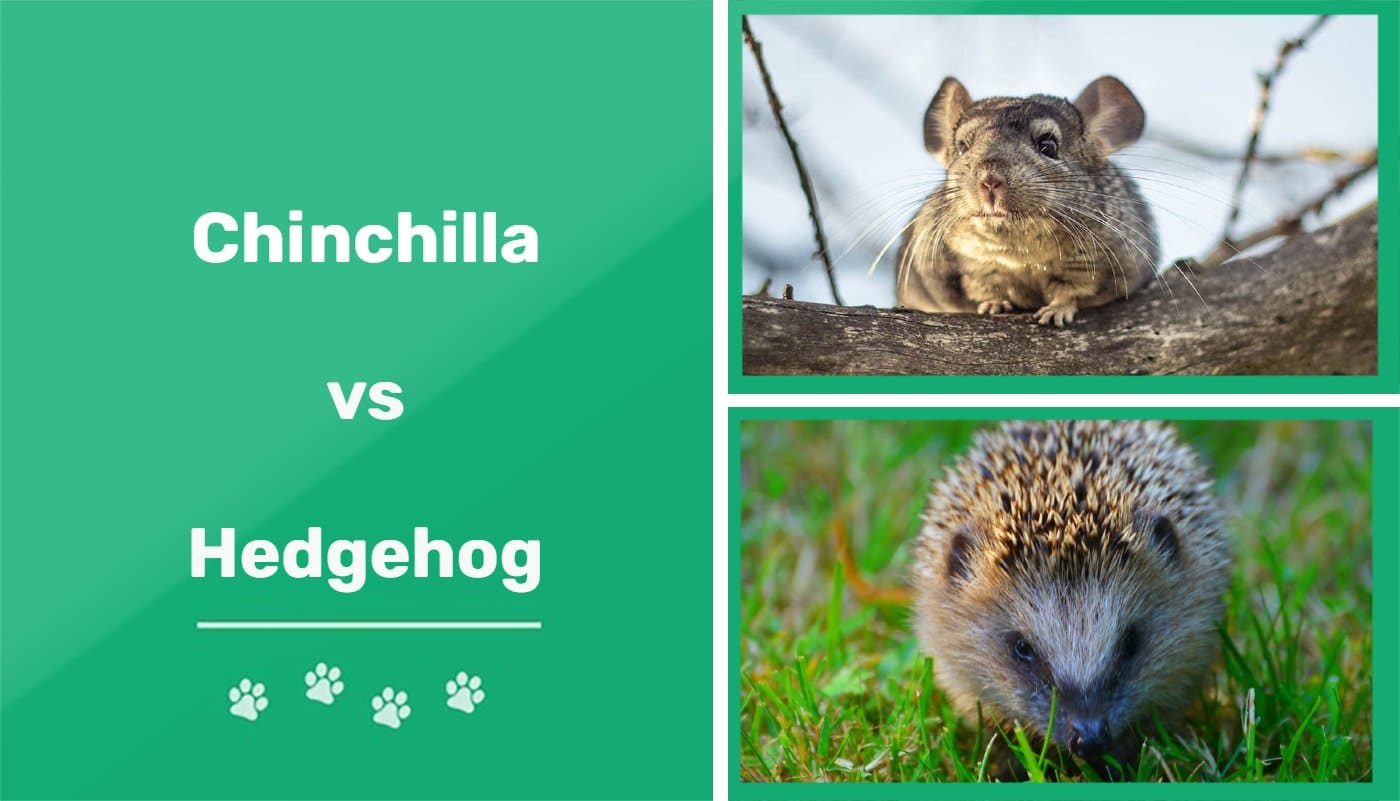 While pets that are small in size seem like they’d be a breeze to take care of, chinchillas and hedgehogs are both two animals that require a bit more maintenance than your average cat. Both pets require a very specific set of cages, food, grooming, and temperatures to stay healthy.

It’s exciting when you have a somewhat-exotic pet that you can love and care for. Chinchillas and hedgehogs are two of the more exotic animals that we’ve been able to domesticate. However, they behave in unique ways, and purchasing one should not be a decision you take lightly. Read on if you’re stuck deciding which of these fun pets you’d like to bring home.

Chinchillas and hedgehogs are two completely different species. You can tell that these two aren’t related after only a quick glance. To start, hedgehogs look almost like miniature porcupines. They have hard spikes that grow out of their back with short legs and long, pointed snouts.

While these two animals are roughly the same size, the chinchilla is much softer. Its dense coat is so smooth, in fact, that it is one of the softest animals in the world. They use this thick coat to protect themselves from the icy cold temperatures of the Andes Mountains.

There is no denying that chinchillas are adorable. Unfortunately, though, having a cute face doesn’t always mean that something is going to be a good pet. Chinchillas give owners quite a few challenges that many wish they had known before they committed to one.

Chinchillas are social animals that enjoy the company of other chinchillas rather than humans. These animals are delicate and not ideal for homes with small children running around. It wouldn’t take much for them to get hurt. Plus, chinchillas can lash out and bite or scratch when they feel threatened. Like many other rodents, chinchillas are also nocturnal and spend a good majority of the night making noise in their cages.

The hardest part about owning a chinchilla is setting up its habitat and making it a habit to keep it clean. Other than that, these are low-maintenance pets. When you stay on top of cleaning, they don’t stink, and their pellet-shaped feces is easy to pick up. However, they are a little finicky about their food and water at times. To keep them entertained, you’ll have to provide them with constant toys for them to gnaw on.

Don’t let their fur fool you into thinking these are chubby animals. Chinchillas have fairly high exercise needs that require them to roam around outside of their cage for one or two hours every night.

Hedgehogs don’t have the fluff that chinchillas do, but somehow, they’re still equally as adorable. Again, small rodents don’t always make the best pets for people. You must be careful to pay attention to all of their needs and ensure that they fit into your lifestyle before committing to one.

In the wild, hedgehogs live their lives as solitary animals, and they prefer to keep to themselves even as domestic pets. They tend to be shy and sometimes wary of unfamiliar people. It takes a lot of patience and gentleness to get a hedgehog to trust you.

Once they warm up to you, these small animals start to get more playful and adjust to being handled. However, there are still times where one of their quills might poke you or their movement in the night keeps you up.

Despite their small size, hedgehogs still must have a nutritious, well-rounded diet and regular veterinary care. You’ll also have to take some time to set up a large enclosure with plenty of toys and an exercise wheel to keep them from getting bored. Please keep in mind that hedgehogs do carry salmonella, and they are not recommended pets with children under 5 years old in the house.

Hedgehogs are similar to chinchillas in that they need to be taken out of their cages to play for at least an hour every night. The rest of their exercise will happen after you put them in the cate at night. Having some type of substrate where they can dig or bury themselves is ideal so that they can keep their minds and bodies moving.

What Are the Similarities & Differences Between Chinchillas & Hedgehogs?

The biggest difference when comparing hedgehogs and chinchillas at first is the obvious physical traits. Hedgehogs have spines on their backs and tend to be smaller, while chinchillas are covered in dense fur and a little larger. However, both animals are nocturnal and most active during the night. Currently, they both need plenty of time to exercise and explore. Neither of them are great cuddlers, and yes, that includes the chinchilla regardless of how tempting it can be to pet them constantly.

One significant difference to pay attention to is the lifespan. Pet chinchillas live between 10 and 20 years. Hedgehogs only live up to 6 years, even when kept as pets. If you aren’t willing to make a long commitment, then you should reconsider buying a chinchilla.

Which Breed Is Right For You?

At the end of the day, you should choose the animal that is going to best fit into your life and that you know you can dedicate the most time to. It wouldn’t be fair for either of these animals if you decided after a couple of years that you no longer wanted to care for them.

Thankfully, both animals have similar needs. It should be the few differences between the two that help sway your decision of which pet is the best choice for yourself.