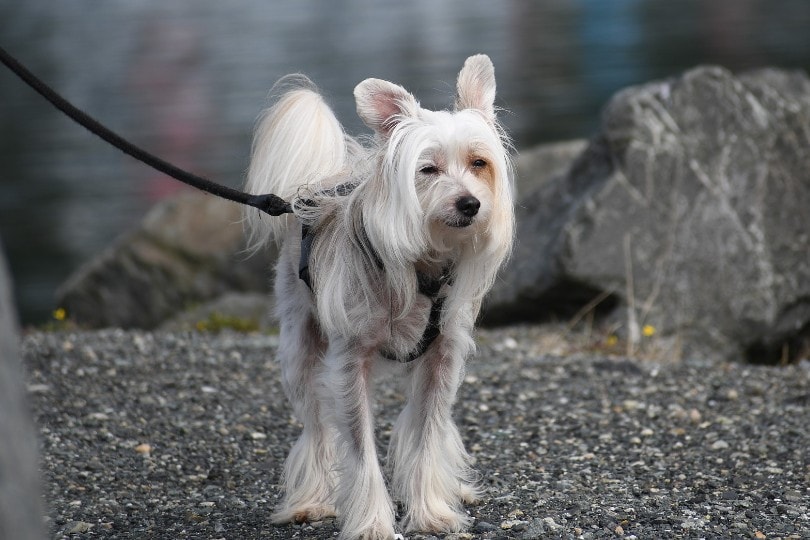 Few dogs come in as many colors and styles as a Chinese Crested Dog. They’re incredibly loving and want to spend as much time with their owner as possible. However, Chinese Crested Dogs can get a bit jealous, especially around small children.

Chinese Crested Dogs love to be your shadow and will eat up as much attention as you’re willing to give them. These are extremely loyal and loving dogs, so it’s not hard to see why they’re so popular.

But how much will a Chinese Crested Dog puppy cost you, and do they have any significant health concerns that you should be aware of? We break down everything that you need to know about these dogs here.

The Chinese Crested Dog is a dog that can be sociable around friends and family, but they can quickly turn timid around larger dogs or strangers. However, timid doesn’t mean they won’t bark at strangers, so they do make a fairly good watchdog.

Still, these dogs are relatively trainable, and it’s something that you’ll need to work on because they like to bark at every little noise and movement. They require moderate exercise, but not what really stands out with these dogs is their long lifespan.

Their average lifespan is 13 to 15 years, but it’s not uncommon to see them live for up to 17 years! Getting a Chinese Crested Dog isn’t a decision that you should make for the short term, especially when you consider that they get jealous around smaller children.

Chinese Crested Dogs are expensive purebred puppies. Getting a Chinese Crested puppy from a breeder will typically cost you $1,200 to $2,200, but a show-quality puppy can cost you closer to $4,000!

There is a little price variation depending on the coat that your dog has and the color variation. But you need to factor in not only the price of the puppy but also medical costs, food, and supplies.

When you add everything together, you can expect to spend anywhere from $1,800 to $3,000 in the first year.

Back when the Chinese originally miniaturized these dogs, they quickly became favorites on ships. They didn’t require much food, and they were extremely adept at catching rats, which could carry disease. This is how the Chinese Crested found their way around most of the world.

2. The Chinese Crested Dog is also known as the “Dr. Seuss Dog”

Since they resemble the creatures in many of Dr. Seuss’s books, they are often referred to as a “Dr. Seuss Dog,” usually affectionately. However, only hairless Crested Dogs look like the creatures in those books.

Since Chinese Crested dogs can never get too much attention, they make a great therapy dog for those who need a constant companion. They’re incredibly loyal and will follow their owner wherever they go, and they’ll always want more attention and love.

Chinese Crested dogs are extremely loving and want tons of attention, but they can be a bit yappy and have a strong jealous streak. They are also usually timid around new people, especially when they’re outside the home.

So, while they might bark at people or other animals inside the home, they’ll be far more likely to run away instead of engaging them. But if someone corners them, they might nip, so it’s best to let the owner handle the situation instead of forcing an interaction.

Chinese Crested Dogs are good for families that don’t have small children. That’s because they love attention and they can get jealous. However, since smaller children demand a ton of attention, you might notice that your Chinese Crested develops a bit of a mean streak and starts to nip.

However, this usually isn’t a problem with older children because they don’t need as much attention, and they can even play and bond with a Chinese Crested themselves.

Keep in mind that Chinese Crested Dogs don’t get along with small children when deciding whether or not to get once. Since these dogs can easily live for 15 years, just because you’re not looking to start a family now doesn’t mean you might not want kids in the next decade!

While a Chinese Crested does get along well with other pets, keep in mind that their jealous streak can come into play here. They crave attention and want all of it, so if you’re giving another pet attention, they might start to get a bit nippy.

You can mitigate these concerns with early socialization and if you already have another pet in the home when you first get a Chinese Crested. However, if you’re looking at adding new pets, you might have problems.

If someone else brings their own dog or cat over to the house, though, it shouldn’t be a problem because these dogs won’t create problems with other people’s pets.

Things to Know When Owning a Chinese Crested Dog

Before you head out and drop a ton of money on a Chinese Crested, it’s best to know exactly what you’re getting into. That’s why we took the time to break down everything that you need to know about these small, loving dogs here.

Whether your Chinese Crested needs wet or dry food, you need to invest in high-quality food to keep your dog healthy. You opt for a high-quality brand, especially one that specializes in small dogs. Not only does this help with their overall health, but the smaller food can also be a bit easier on their teeth.

While you can and should take a Chinese Crested out for short walks, that’s the extent of the physical activity that you should give them. They will get most of their physical activity from day-to-day life, like when they’re playing with toys or their owner.

While a Chinese Crested does not need tons of physical activity, you might start to notice destructive behavior if you don’t keep them mentally stimulated. That’s because Chinese Crested Dogs are smart and can quickly become bored without enough stimulation.

While Chinese Crested Dogs are intelligent, they have a stubborn streak that can make them a bit more challenging to train. This means that you’ll need a great deal of patience and dedication. Otherwise, their strong-willed personality will get the best of the situation.

Finally, keep in mind that you need to be careful about how you correct these dogs because they can be a bit timid. That means you need to stick solely with positive reinforcement; otherwise, you’ll find that you have a dog that’s scared of you and still won’t do what you want.

If you have a hairless Chinese Crested dog, you need to bathe them frequently. When bathing, wash them with a top-notch shampoo, especially on the areas of skin where they don’t have any hair.

They are prone to skin problems like acne, and a failure to bathe them will exacerbate these problems. If patches of hair do start to grow on their body, it’s best to shave them to protect the skin.

However, avoid all moisturizers or lotions because these can create even more problems.

If you have a “powderpuff” Chinese Crested, you need to brush them weekly. They will still need regular baths, even if not as many as their hairless counterparts. After baths, you need to towel and blow dry them straight away, as they can’t handle the cold.

By far, the most common concerns that you’ll have to deal with for a Chinese Crested are dental-related. They are especially common in hairless Chinese Crested, but you can help alleviate some of these concerns with frequent teeth brushing.

We highlighted a few other common health concerns too. This way, you can try to catch problems before they become too serious.

While there aren’t many differences between males and females, there are a few that you should be aware of. First, while neither females nor males are large, male Chinese Crested dogs are usually slightly larger than females.

Moreover, while both females and males can be stubborn and difficult to housetrain, males struggle with this more because they like to mark their territory. Neutering can help alleviate this, but it won’t completely eliminate their urges.

Finally, males tend to want even more human companionship than their female counterparts, especially as they age. This is common among all dogs, but it’s especially pronounced in a companion dog like a Chinese Crested.

While you might want to avoid Chinese Crested Dogs if you have small children, if you don’t and you want a unique and loyal companion dog, they make a great choice.

They love attention and want as much of it as possible, and they’ll never leave your side unless you make them. Also, with so many different coats and colors, there are tons of options out there.

With all their great personality traits, it’s no wonder that these dogs are so loved and sought after.

Did you know that the Chinese Crested is actually a descendant of a Mexican dog breed? Our list has more!