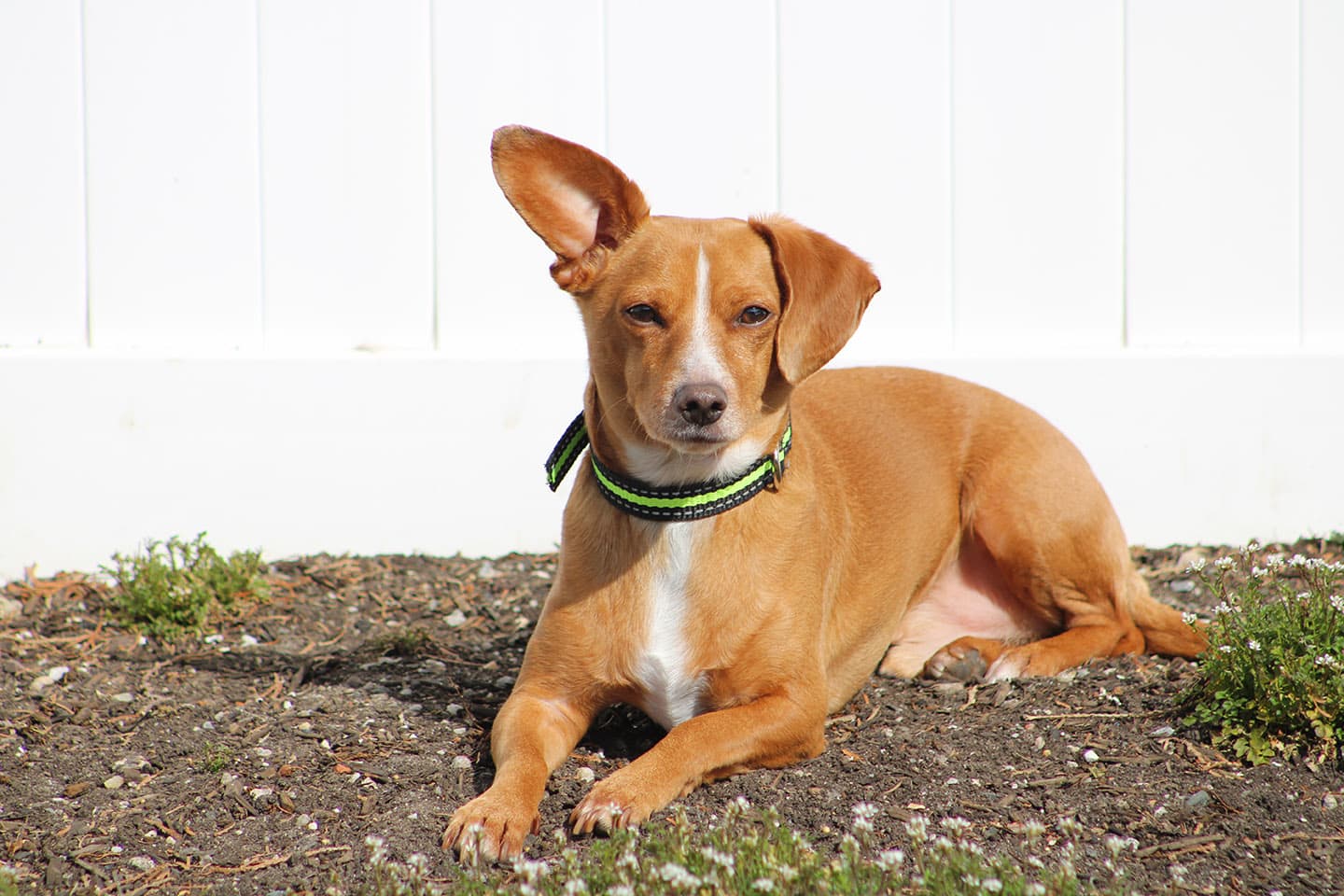 The Chiweenie is the perfect pooch for the person that wants to bring their dog everywhere they go. If you can’t stand to be without your dog for even a moment, then the Chiweenie will be a good fit, as they can’t stand to be left alone without their family. But as long as they’re with their owners, Chiweenies are super adaptable. You can take a Chiweenie anywhere with you. They’re the perfect companions for travelers as they’re small, easy-going, and don’t make much mess.

On the downside, Chiweenies do tend to be a bit yappy, though this is individual to the dog. Chiweenies are a mix between a Chihuahua and a Dachshund. They’re considered an F1 designer breed, which means that Chiweenies aren’t crossed with each other. Each Chiweenie is the result of mixing a purebred Chihuahua with a purebred Dachshund, which helps to reduce the susceptibility of the Chiweenie to any health concerns that are prevalent in either parent breed.

Chiweenie Puppies – Before You Buy…

What’s the Price of Chiweenie Puppies?

The Chiweenie is a relatively new designer breed that only emerged in the 1990s. Because they’re so new, standards are yet to be established regarding the breed’s characteristics or pricing. Prices can range drastically right now, depending on where you purchase your Chiweenie.

To get a better understanding of Chiweenie pricing, we need to first take a look at the breed’s parents. Dachshunds are very popular little wiener dogs. From a reputable breeder, you’d spend between $800 and $3,500 to bring one home, depending on its quality, health, lineage, and the breeder’s reputation.

Chihuahuas are priced pretty similarly. While you can grab one from a backyard breeder for just a few hundred, Chihuahua prices from a reputable breeder range from about $800 to upwards of $2,000.

Granted, Chihuahuas and Dachshunds are both recognized breeds. Members of either can have papers and proven lineages, which boosts their cost substantially. Chiweenies aren’t a recognized breed since they’re a hybrid. This means that there are no papers for a Chiweenie. For this reason, Chiweenies don’t command the same high prices that their parents do. Additionally, there are very few breeders devoting their time and energy to the Chiweenie.

Unfortunately, this means that you might be forced to purchase a Chiweenie from a backyard breeder, so you’ll need to do some due diligence. Inspect the premises where the puppy is kept and ensure that their living conditions are acceptable. Try to meet your dog’s mom if possible. Her health and appearance can clue you in to what might be waiting in your puppy’s future.

For many people, rescuing or adopting a dog sounds like a better option. Not only is it much cheaper than purchasing from a breeder, but you’re also giving a lucky pup a second chance at a happy life. You’re not too likely to find a Chiweenie in a shelter though, so adoption might be out of the question. Though they’re rising in popularity, Chiweenies aren’t the most common dogs just yet, so it’s unlikely that you’ll find one available for adoption.

1. Chiweenies Tend to Bark a Lot

Chihuahuas are known for being rather yappy little dogs. They often seem to have little-dog syndrome, where they believe they’re much larger than they actually are, causing them to bark aggressively at just about everything. Or, maybe they’re just scared of everything! Either way, they bark a lot. Unfortunately, Dachshunds are in the same boat! These dogs also bark loud and often, making them an annoyance for neighbors. While Chiweenies are great dogs for living in small spaces because of their tiny size, they can be just as annoying for neighbors as either parent breed. The apple didn’t fall far from the tree, and the Chiweenie is a dog that barks far more than most.

2. Most Chiweenies Are Stubborn

You can often learn a lot about an F1 designer breed like the Chiweenie by looking at the breeds that were crossed to create it. Chihuahuas are equally known for their stubborn nature as they are for their yappiness. Once again, the Dachshund is quite similar, proving to be just as stubborn as Chihuahuas. If you expect anything different from your Chiweenie, you’re practically guaranteed to be disappointed. Similar to both breeds that contributed genes to them, Chiweenies can be exceedingly stubborn.

3. The Breed’s Origins Are a Mystery

The origins of many newer breeds are well-known and documented. Breeders responsible for creating new dogs often keep good records since they’re so heavily invested in the new breed. However, the Chiweenie is an exception. No one really knows where this breed started or how it came to be. They’ve only been around for a few decades, but where exactly they came from is unknown.

Temperament & Intelligence of the Chiweenie

There are good reasons why the Chiweenie is exploding in popularity recently, and one of the main reasons is their massive personalities. What else would you expect knowing that the Chiweenie is a cross between a Dachshund and a Chihuahua? Neither of these breeds is large in size, but they’re sure big in personality, and the Chiweenie is no different. Chiweenies are generally friendly, loving, and affectionate with their families, though they can certainly be aloof with strangers. Because they’re always alert and tend to bark at everything, they do make excellent watchdogs. But with their small size, they’re definitely not going to offer much in the way of protection; just a loud canine alarm!

You’ll likely find that your Chiweenie is quite amusing. They tend to be curious and active, always wanting to play. These are energetic canines, so be prepared to spend a good bit of time playing with your Chiweenie to keep it engaged.

Chiweenies are dogs that prefer to be around their families at all times. They don’t like being alone and will often display negative behaviors if left on their own too often. This makes them difficult for single professionals who are away from home for most of every day. Families make great fits for these dogs since there’s someone at the house more often than not. This can help your Chiweenie avoid anxious behaviors that might occur if it’s left alone for large chunks of time.

Similar to Chihuahuas, Chiweenies have little-dog syndrome, and it causes them to often be aggressive towards larger dogs. You can mitigate this problem with proper socialization starting at a young age, but it’s still a common aspect of their personalities. Even so, if your Chiweenie is raised with other dogs, it should be fine with those dogs and is unlikely to be aggressive.

Things to Know When Owning a Chiweenie:

Chiweenies are little dogs that rarely weigh much over 10 pounds. As such, they do best on high-quality dry dog food that’s specifically created for smaller breeds. You will need to be careful though, as dogs of this size are easy to overfeed. It doesn’t take much to make a Chiweenie overweight or even obese.

Chiweenies are active and highly energetic dogs. Thankfully, they’re small enough that it doesn’t take too much to expend that energy. For the most part, you can help dissipate the excess energy through a few vigorous play sessions. A couple of short walks throughout the day will also help. If you have a yard, that’s great, but it’s certainly not necessary for a dog this small.

More than just friendly companion pets, Chiweenies are also very intelligent. That said, their stubbornness can make them quite difficult to train, so you need to have a lot of patience. Chiweenies won’t respond well to punishment and harsh tones, so make sure you stick to lots of positive reinforcement. Even though they’re quite stubborn, most Chiweenies also really want to please their owners, so it tends to even out. Still, they’re best trained by experienced dog trainers. Beginners can take them on, but they’re more work than many other breeds.

Chiweenies usually have very short coats that require little upkeep. You can simply brush it out once a week to get rid of the loose and dead hairs. Many Chiweenies have droopy ears though, so you will need to take extra care to ensure that they don’t get any ear infections. Clean them out with a damp washcloth once or twice per week and make sure that you always keep the insides of their ears dry. Aside from that, just keep your dog’s nails trimmed and its teeth clean with regular brushing.

F1 designer breeds are often considered to be healthier and hardier than pure breeds. That’s certainly the case with the Chiweenie, as these dogs are healthy overall and not susceptible to many major health concerns.

Male Chiweenies tend to be a bit larger and heavier than females, but not by much. You are likely to notice that males are more aggressive than females, especially if they’re not fixed. That said, females tend to bark a bit more, and they can also be moodier than males.

If you can handle the big personality and constant attention needs of the Chiweenie, then it will make a great dog for you, whether you’re an individual or family. These dogs can get along with everyone, but they’re generally wary of strangers. They’re always on alert, which makes them great watchdogs, but their small size means they can’t offer any protection. However, that small size also makes it easier to deal with their energetic nature since you won’t have to provide hours of exercise every day. They’re great dogs for travelers and apartment dwellers or anyone who lives in a small space, but poor pets for the person who is gone most of the day at work.

Looking for more crossbreeds? We have a full suite of both Chihuahua Mixes and Dachshund Mixes!