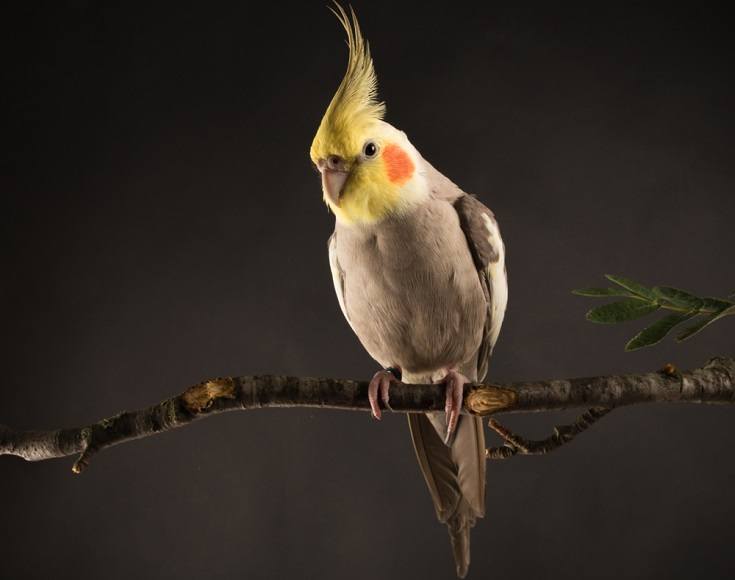 Cockatiels are one of the most popular pet birds in the United States, second only to the Parakeet (Budgie). They are such a popular bird choice as they are intelligent, hardy, easy to care for, and easy to breed. Also, while Cockatiels are friendly and social birds, they are happy to be left at home for long periods — provided they have a friend!

Also known as the Isabelle Cockatiel or Cinnamon Teil, the Cinnamon Cockatiel has a unique and beautiful coloration caused by a recessive gene. This recessive gene affects the bird’s melanin pigment, resulting in a brown pigment that doesn’t change to the grey or black coloring commonly seen in other Cockatiels.

A post shared by P E A N U T (@peanutthecockatiel_nz)

Cockatiels originated in Australia, and are the smallest members of the Cockatoo family. In the wild these birds live in large flocks, and since the early 1900s have become popular pets due to their friendly personalities and the fact they’re so easy to breed. All Cockatiel pets are bred in captivity, as trapping and exporting them from Australia has thankfully been made illegal. The Cinnamon Cockatoo is a result of genetic mutation found in captive-bred birds and carefully developed by breeders, and consequently does not exist in the wild.

These little birds are such popular pets due to their gentle, docile, friendly, and affectionate temperament, and are happy to be close to their owners. They live in large flocks in the wild, and this social aspect makes them well disposed to be kept as pets. They are hardy birds that do not mind being left alone, although if left alone often, it’s a good idea to have a pair to keep each other company. They are a lot quieter than other parrot species, making them ideal for small homes or apartments.

If they are well-raised and socialized, they are gentle and docile birds, but untamed birds are prone to nipping. Luckily, their social nature makes them friendly and accommodating of strangers. They are highly intelligent birds that can be easily trained to learn tricks and make a wide variety of sounds and calls, even basic speech mimicry.

The biggest indicator of a Cockatiel’s mood is its crest feathers. Straight up crest feathers usually indicate that the bird is startled, crest feathers held close to its head means it is tressed or afraid — often accompanied by hissing, and slightly held back crest feathers are an indication of a content, relaxed Cockatiel.

One of the things that make Cockatiels such popular pets is that they are far quieter than most other parrot species. They do love to vocalize, though, with whistles and even talking, but are not particularly loud. They are experts at mimicking sounds, especially the males, and are known to trick owners into thinking their phone is ringing or their alarm is going off! Mimicking speech is also no issue for a Cockatiel, although they do not have the extensive vocabulary of other parrots like African Greys.

The unique coloring of the Cinnamon Cockatiel comes from a sex-linked recessive genetic mutation. It lacks the grey coloring found in most Cockatiels and this grey is replaced by a tan to brown, cinnamon, coloring, earning them their name. The males typically have a bright yellow face and bright orange cheeks, while females typically have paler orange cheeks and white faces. Both sexes have bright yellow tail feathers, and this further brings out their cinnamon coloring.

There are several variations of the Cinnamon Cockatiel, including:

Caring for the Cinnamon Cockatiel

As Cinnamon Cockatiels are such social animals they are best kept in pairs, but if they have enough attention and interaction with their owner they can happily live alone too. Their cage needs to be roomy and spacious — big enough for them to flap and stretch their wings, and large enough to accommodate perches, toys, and food bowls. Tall cages with horizontal bars to climb on are best and will give them plenty of opportunities to climb and get adequate exercise. Even then, they still need a good amount of time outside their cage too.

Cockatiels love to forage and play on the ground, so it’s a great idea to cover the floor with newspaper and hide treats and food for them to forage for. They are particularly messy birds that produce fine, powdery dust on their feathers that’s a function of their grooming. This of course will leave a powdery coating all over their cage, and so it needs to be regularly cleaned. You may even consider bathing them occasionally or giving them a bath to splash in to help reduce this mess.

Like any pet Cockatiel, they’ll need their wings clipped once or twice a year. While this is possible to do yourself, it does take some precision and we recommend taking your bird to a professional. In order to prevent injury to themselves, their owners, and other birds, they also need a nail clipping 2 or 3 times a year.

Cockatiels are generally healthy, hardy birds that suffer from very few health issues, however, there are potential issues that can arise for all pet birds. If your Cockatiel starts showing lethargy, weight loss, and ruffled feathers, there may be a medical issue. Most of these symptoms occur from a nutritional deficiency though, as most pet birds are simply fed on seeds. Be sure that they are getting all of their nutritional requirements if they are exhibiting any of the above symptoms.

Another common issue in pet birds is the habit of incessantly plucking their own feathers out. This is mostly due to a lack of socialization and interaction, and if they start exhibiting this behavior they need to get a partner to prevent loneliness. Many pet birds are susceptible to respiratory illnesses, and if you notice them wheezing, sneezing, or coughing they’ll need to go to the vet immediately.

A lot of pet bird owners make the mistake of feeding their birds almost solely on seeds, but variety is key in the diets of any parrot species. Seeds are a great addition to a Cockatiels diet, but they should only make up around 30% of their daily food intake as they are high in fat. Commercially available pelleted diets are the best choice, as they will provide your Cockatiel with all the required nutrition they need.

Your Cockatiels diet should also be supplemented with fresh fruit and vegetables including carrots, spinach, apples, bananas, and oranges. Cuttlebones from Cuttlefish are also highly recommended as they can provide essential calcium and help keep your bird’s beak trim and healthy. And of course, fresh water should be available at all times.

Cockatiels are active birds that love to climb and perches, ladders, and toys should be readily available in their cage for mental and physical stimulation. Time outside their cage is also essential, and a few hours a day will allow them to stretch their wings and keep them socialized. They love shredding with their powerful beaks, and toys they can pull, tug, and shred are a great way to keep them exercised. Climbing ropes are also a great addition, as well as natural wooden perches.

Cockatiels, especially if they are alone, love mirrors, and can easily spend the entire day interacting with their own reflection. While this is great in very small doses, we highly recommend removing any mirrors from their cage as it can prevent them from doing any exercise.

Where to Adopt or Buy a Cinnamon Cockatiel

When adopting or buying a Cinnamon Cockatiel, or any other parrot, we highly recommend purchasing a bird from as young an age as possible or a bird that has been handled and socialized regularly. Birds that are not hand-raised or adequately socialized can be a challenge to tame.

Breeders will often charge higher prices than pet shops, but buying from a breeder will usually result in a much healthier, friendlier bird. Be careful of buying Cockatiels from general pet stores as you do not know their history or genetic linage. Cinnamon Cockatiels are rarer than normal grey varieties and are thus typically higher priced. That said, Cockatiels in general are fairly low-priced birds anyway, and typically go for around $300-$400.

Pet stores that deal exclusively with birds and bird breeders are the best bet, as these stores are primarily run by owners who have a love and enthusiasm for birds. This usually means the birds are healthy, well-cared for, and obtained from reputable breeders. Rescue groups are also a good option, but be sure to carefully assess the bird’s temperament before buying, and make sure their feathers are smooth and healthy-looking.

Cinnamon Cockatiels are popular pet birds, and for good reason. They are easy to care for, affectionate, and intelligent animals that adjust well to living alone. If you are not at home with your bird a lot, it’s a good idea to get a pair as these birds are highly social animals that will get bored and lonely swiftly on their own. While they love to vocalize and mimic sounds, Cockatiels are far quieter than most parrot species making them ideal for apartment living.

Lastly, Cockatiels can live for 35 years and older in some cases and are consequently a massive responsibility that should not be entered into lightly. They make wonderful companions though, and if you are ready for the responsibility, they will keep you company for many years to come!