7 Cockatiel Sounds and Their Meanings (With Audio) 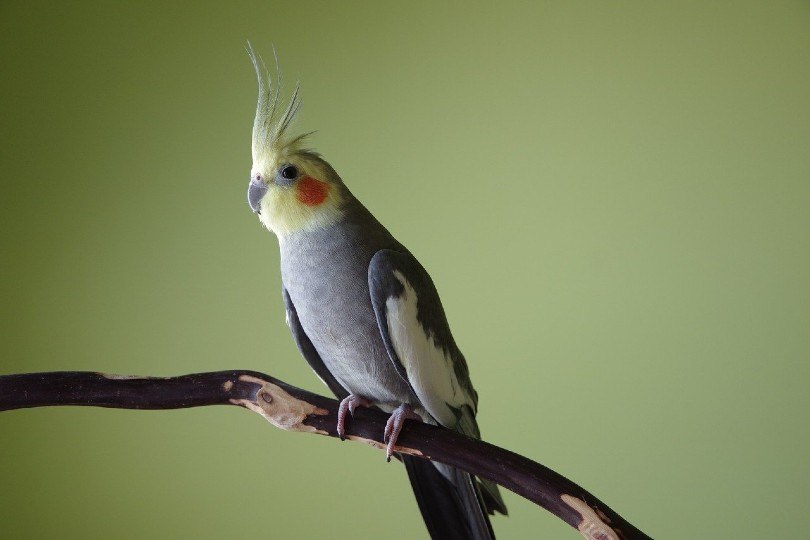 Owning a cockatiel can be a richly rewarding experience, and a big reason is the variety of beautiful sounds that they make. These are deeply expressive birds, and it’s easy to convince yourself that the two of you have a communication style that’s unique to your relationship.

However, cockatiels make certain sounds regardless of who their owner happens to be. If you’re curious to find out what, exactly, those sounds mean, though, the guide below will walk you through each of them in detail (complete with examples).

That’s the whole point of it, in fact. It’s designed to get attention, and the birds use it when they’re sad, lonely, scared, or otherwise upset. Cockatiels are naturally social animals, so they can scream to let other birds know that a predator is in the area or to alert them to other issues that they may be having.

So, what does it mean when your cockatiel screams? We don’t know — that’s up to you to figure out. However, as you get to know your bird better, you should have a good idea about what’s upsetting them so much.

The whistle is far more melodious than the scream, but it can get annoying when it goes on for hours and hours on end. Think about sharing a cubicle with a coworker who’s always whistling the theme from “The Bridge on the River Kwai,” and you’ll have an idea of what spending time with a whistling cockatiel is like.

Whistling is sometimes also called singing, and it’s generally done by males looking to find a mate. Your bird might be whistling because they’re feeling amorous, or they may have simply caught a glimpse of themselves in the mirror and liked what they saw.

If you don’t want to deal with whistling from your cockatiel, the best way to avoid it is by bringing home a female.

Many people don’t realize it, but cockatiels are capable of creating accurate reproductions of the human voice. Some have even been taught a variety of words and phrases that they can repeat on command.

Of course, just because your cockatiel is speaking to you doesn’t mean they’re actually communicating. They’re just recreating the sounds that you’ve made.

As with whistling, males are much more likely to imitate sounds than females are, but some ladies do pick up on it. If you want to teach your bird to mimic you, speak slowly and in a low pitch, as they’ll repeat things back to you in a higher register.

Also, be patient. It may take months of trying before your cockatiel can imitate you, so practice every day and don’t give up.

Just like cats, snakes, and hissing cockroaches, cockatiels can sometimes hiss when they feel angry or threatened. Unlike some other hisses that you’ll hear in the animal kingdom, though, the cockatiel’s war cry is short and quiet — and not at all intimidating.

That doesn’t mean you shouldn’t take it seriously, though. The hiss is usually a precursor to a strong bite, and these little birds can pack a punch. They can easily break the skin if they feel the need to, so give their hisses respect. Back off, and let them compose themselves for a few minutes before you try to handle them again.

Chirping is one of the most enjoyable sounds that a cockatiel can make. They chirp when they’re happy or content, and they’ll often chirp at you to let you know that they consider you a member of the flock.

Unlike many of the other sounds on this list, chirping isn’t shrill or overpowering, and it’s unlikely to get annoying. The one exception is if they start chirping at sunrise, in which case you might want to move them to a different room.

They often chirp when they’re feeling inquisitive as well. If they see something new that they don’t feel threatened by, they may chirp at it or at you until they feel like they have a better understanding of it.

Also, feel free to talk to them or chirp back. They love it — it’s what other birds in the wild would do, after all.

Cockatiels are social creatures. They love to check up on other members of their flock, but doing so isn’t easy if the other animal is out of eyesight.

That’s where the contact call comes in. It’s a low-key way for them to check in with loved ones, and it’s often returned in kind until the two animals can be together again. Think of it as the equivalent of sending someone a note to tell them that you’re thinking of them.

Don’t blow them off, however. If your cockatiel is constantly calling or whistling for you every time you leave the room, that means they’re worried about you — and they may start to panic if you don’t respond. This can be incredibly stressful for them, so be sure to talk or whistle back to them so they know you’re okay.

Beak grinding acts in much the same way that purring does in cats. It’s a way for the animal to signal that they’re happy and content, and cockatiels will often grind their beaks as they’re being petted. They also often do it right before going to sleep.

The beak grinding is usually accompanied by fanning the facial feathers over the mouth and allowing feathers on the body to become fluffy and ruffled.

What Is Your Cockatiel Saying to You?

Learning what common cockatiel noises mean is a good way to start understanding your bird, but keep in mind that they’re all individuals, with unique communication styles.

As you get to know your bird more, you’ll have a better idea as to what their various noises mean. Before long, you’ll be as fluent in chirp or whistle as you are in English (just don’t chirp at strangers — they tend to think it’s weird for some reason).

Looking for more information on cockatiels? Take a look at our guide on how long they live!