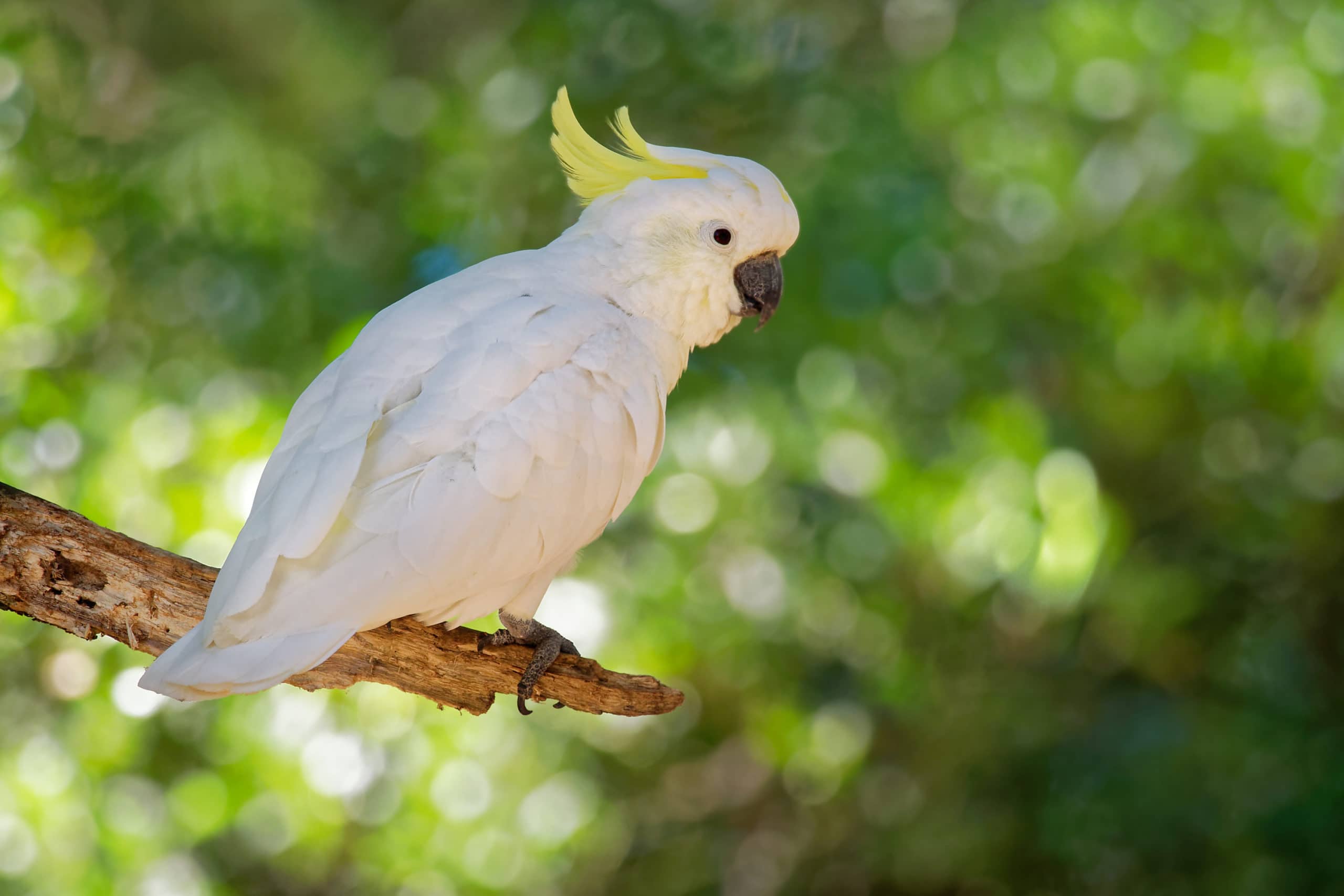 Big birds with even bigger personalities, cockatoos make popular, if sometimes needy and demanding pets. Over 20 different species make up the cockatoo family, all differing in size, appearance, and personality. Among the loudest of pet birds, cockatoos are never shy about expressing their feelings, no matter what they are! However, they can also be loving and entertaining companions, with the right handling. Read on to learn more about the social and sassy cockatoo!

All of the cockatoo species originate from Australia and nearby islands including New Zealand, Indonesia, and the Solomon Islands. They were brought to Europe in the mid-1800s, first as specimens and later as pets, by sailors returning from exploring that part of the world. In the early 20th century, wild-caught cockatoos became popular pets among rich Europeans. Around 1985, captive-breeding of cockatoos began and today nearly all pet cockatoos are bred rather than wild-caught.

In the wild, cockatoos live mainly in forests of all types, including rainforests. They are highly social, living and foraging for food in flocks of up to 100 at a time.

Cockatoos are known for their unique temperament among the pet bird species. They are smart, loving, affectionate birds with the right socialization and plenty of attention. However, they can also be demanding of their owner’s time, are prone to being moody, and can develop behavioral problems if their needs aren’t met to their satisfaction. Add in their tendency to express their feelings very loudly and you begin to understand why cockatoos generally aren’t recommended for inexperienced or first-time bird owners.

Raising a cockatoo correctly is a delicate balance of handling them enough to be tame but giving them enough time on their own to learn to be okay with it. Otherwise, they may grow up to be overly attached to their humans and unable to deal with being left alone.

A well-socialized, well-adjusted cockatoo makes a playful, cuddly, often wildly entertaining pet. They enjoy spending time with their owners and love to show off and be the center of attention. These temperament traits help to explain why cockatoos are such popular pet birds, despite the challenges they sometimes present.

Because they naturally live in large flocks, cockatoos are vocal birds, constantly communicating among themselves or with their humans. Their most common sounds include loud screeching or squawking. A pet cockatoo may use this noise to sound the alarm when someone comes to the door or to demand attention from their owners. Experienced cockatoo owners learn not to reinforce this behavior or their cockatoos just get louder!

Happily, cockatoos can be taught to “use their words” instead of screaming. Cockatoos aren’t as good at talking as some other kinds of parrots but they are excellent at copying sounds, including human speech.

Most cockatoos are either mostly white or mostly black. Some have splashes of brighter color like red or yellow on their crest, wings, or around their eyes. A few species of cockatoo, such as the galah or Major Mitchell’s, have gray and pink coloring.

Like many pet birds, male and female cockatoos usually have similar coloring and are hard to tell apart based on appearance. However, some cockatoo species do have some differences between sexes, usually eye color, beak size, or sometimes duller coloring on females.

Caring for the Cockatoo

A cockatoo needs a cage large enough to comfortably spread and flap their wings, which means their ideal cage size will depend on how big they are. Larger cockatoos, such as the umbrella cockatoo, should have a cage at least 3’ W x 4’ D x 4’ H. For safety, the cage bars should be 1 to 1.5 inches apart and made of strong materials because cockatoos are enthusiastic chewers.

If possible, pick a cage with bars running up and down rather than side to side so the cockatoo can climb them more easily for exercise. Make sure the cage is stocked with plenty of toys and perches to keep your cockatoo entertained. Cockatoos can be destructive so they will need lots of tough, safe things to chew and shred.

Try to place your cockatoo’s cage somewhere they can see and participate in the household activity. They will want to feel safe but also included.

Cockatoos may enjoy having another, similar size bird as a friend, especially if you will have to leave them alone during the day while at work or school.

Cockatoos are different from other birds in that they don’t produce oils in their feathers but a fine powder instead. Because of this, they need regular bathing to keep the powder from making too big of a mess. Give them access to a water bath or mist shower at least every other day.

Like all pet birds, cockatoos will need their beaks, wings, and nails trimmed regularly. If your cockatoo is an only bird, they’ll need you to fill in for their flock mates and help groom their head and neck feathers by scratching them gently in these areas.

The most common health problems in cockatoos tend to be behavioral, like feather picking and self-mutilation. Lonely or bored cockatoos often develop these problems, which can lead to further skin infections.

Other health problems cockatoos may suffer include:

In addition to these issues, cockatoos can get themselves into trouble because they are curious and destructive. They often chew or swallow objects such as electrical wires, jewelry, or furniture that are dangerous. Make sure your cockatoo’s space is free from items like this and supervise them carefully during out-of-cage playtime.

Because cockatoos are prone to becoming overweight, feeding the right diet is extra important. The majority of a cockatoo’s diet, up to 75%, should be nutritionally balanced pellet food. In addition, cockatoos should eat a variety of fruits, vegetables, and cooked grains every day. Higher fat foods like seeds and treats should only be offered occasionally and in small amounts.

Cockatoos need daily exercise, not only for mental stimulation but to help keep them at a healthy weight. If possible, they should be given 3-4 hours a day out of their cage. They enjoy playing on bird gyms or trees and with a variety of toys, especially ones they can destroy! Keep them interested by rotating their toy and activity options regularly.

Spending one-on-one bonding time with your cockatoo every day is essential to keep them happy and healthy as well. Many cockatoos love to cuddle and bond in other ways like training, talking, and grooming sessions.

Where to Adopt or Buy a Cockatoo

Due to their long lifespans, noisiness, and high attention demands, many cockatoos end up in need of new homes. If you are willing and able to adopt a cockatoo, you will more than likely find one available. Animal shelters and bird rescue groups are good places to start your search for an adoptable cockatoo. The cost to adopt a cockatoo will vary but generally will be $450-$600.

Cockatoos, especially the more common pet species, are usually widely available to buy from specialty pet stores or breeders. The average cost to purchase a cockatoo is $2,000 but rarer species will be more expensive, even up to $15,000.

No matter if you adopt or buy a cockatoo, make sure you choose a healthy bird and are prepared for the responsibility and demands of properly caring for them.

Often nicknamed “love sponges,” cockatoos can be among the best feathered companions, deeply devoted to their owners and full of affection. At the same time, living with a cockatoo presents some challenges. They can be loving one minute and in a full-on temper tantrum the next! Keeping them healthy, mentally and physically, requires dedication and is not for the inexperienced bird owner. Owners up to the task, however, will enjoy many years of love and entertainment from their cockatoos!