Continentals and Flemish Rabbits at a Glance: 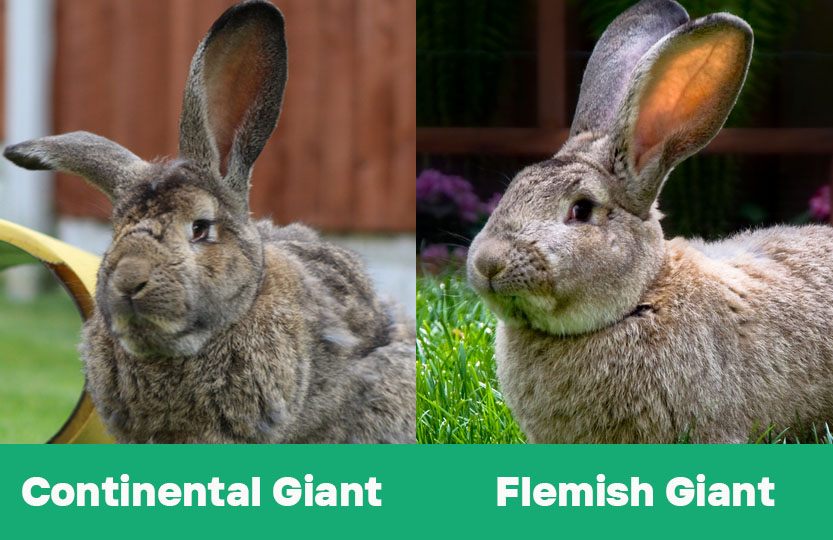 These rabbits were originally bred for meat due to their large size. They are one of the oldest breeds, dating back to the 16th century. Another name for this breed is the German Giant (when in Germany), and they are said to have descended from the Flemish Giant rabbit.

Continentals are nicknamed Contis for short, and there are two varieties: White Continental and Colored Continental. Colored Giants can be black, light or dark steel, agouti, red agouti, yellow, and opal.

Their bodies are well-muscled in the hindquarters and are solid with a sturdy back. These rabbits can weigh between 16 to 20 pounds and can get up to 3 feet long. However, their average life span is five years. They have long ears that are roughly 25% of their body length.

Their coat is thick and dense with guard hairs and a soft undercoat. They may need help grooming because they are so large, and it is important to keep them clean and groomed to prevent health issues from occurring.

Contis are known for their friendly nature and make great family pets because they are calm and intelligent. You can teach your Conti how to use the litter box and recognize its name. They prefer to be part of the family and thrive with plenty of attention and love.

They are not recognized by the American Rabbit Breeders Association (ARBA). However, owners in the U.S. use the British Rabbit Council (BRC) as a guideline if they show this breed.

These rabbits are nicknamed “the gentle giants” because they can weigh up to 22 pounds and are considered laidback and calm. The origin of this breed is not clear because there are conflicting reports, but many say that they are descended from the Patagonian or Argentinian rabbit. The Flemish Giant arrived in the United States in the 1890s from England and were originally bred for their meat.

These rabbits are so large that some compare them to a medium-sized dog. Unfortunately, they tend to be overweight, which can lead to health issues. In order to support their large size, they have strong hind legs, and their body is in the shape of a semi-arch. Their ears are 8 inches long and upright, and you can find them in a variety of colors: black, light gray, sandy, white, steel gray, blue, and fawn. The average lifespan is five to seven years.

Their coat short, glossy, and dense coat doesn’t require much grooming, though due to their large size, you will want to make sure they are grooming themselves adequately. The Flemish enjoys the attention of being groomed, so they will behave when it needs to be done.

Like the Conti, the Flemish Giant is docile and acts more like a dog than a rabbit at times. They are intelligent and easy to litter-train and will become a part of the family in no time. They are recognized by the American Rabbit Breeder’s Association (ARBA), which is ideal if you prefer to use them as a show animal.

As you can see, there are more similarities between the two breeds than differences. Both make great family pets, but keep in mind that because they are large, they will require more room to roam, as well as a hutch that can accommodate them comfortably. If you have a mind to show rabbits, your best bet is the Flemish Giant because they are recognized in the United States, but if you live outside of the States, a Continental is a fine option.