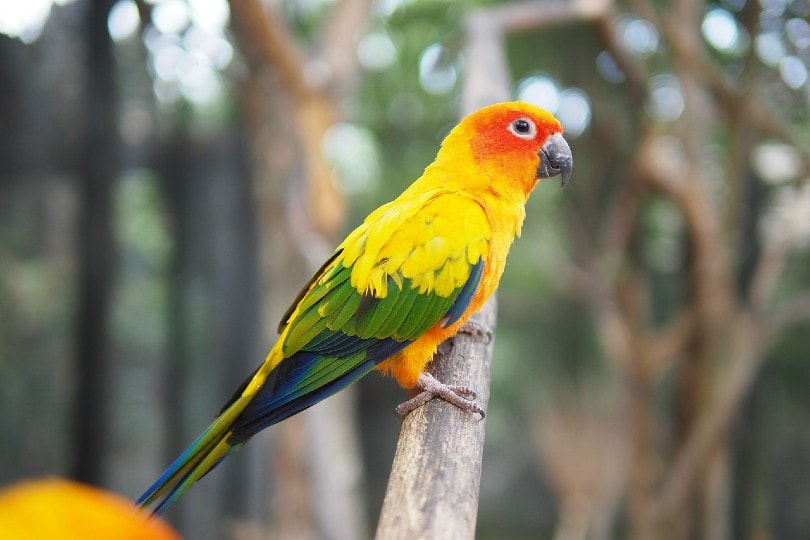 If you’re in the market for a pet bird, conures are one of the best options. They’re small and easy to care for but still have plenty of personality! In this post, we’ll talk about what you need to know before adopting your own conure.

The first question is: What kind of conure do you want? There are many different types of Conures, so it can be difficult to pick just one. Some people prefer the large green Amazon parrots, while others want a smaller yellow and red Gouldian finch-like species. The most popular type of conure is the Sun Conure because of its bright patterns and availability.

If you’re interested in getting a new avian friend or just curious about this colorful animal, read on to learn more about conures.

Conures is an umbrella term for a group of parrots and other birds that all share some basic traits. They can be found on many continents, including Africa and Asia, though they are believed to have originated in South America.

The word “conjure” comes from an old French term meaning “parakeet,” which these animals were known as back then.

Conures have enjoyed popularity with humans for centuries because of their colorful plumage, friendliness to people, ability to mimic speech like other larger parrot species such as macaws.

Conures are known for being some of the most friendly and playful birds in the avian kingdom.

They can be very noisy, though, so you need to think about this if you’re looking for a quieter pet! But don’t let that put you off – their noise is bearable and not as loud as larger parrots such as macaws.

Many people buy conures because they love how playful, friendly and cuddly these birds are. Some can even enjoy being held (the ones that don’t like to fly).

They are very smart birds trained to do many different tricks such as rolling over, standing on one foot, and even beg!

As long as you provide them with the attention, they will be happy. This is partly because these birds are not satisfied just to have toys – they want a lot of contact from their owners too.

Conures can learn words, and some can say their own name. Some conures like to mimic the sound of other birds or dogs barking. The bird’s speech capabilities will depend on which species it comes from.

The Erythrophyllas (Mexican parrots) are most known for talking well, while Amazonian conures are less vocal.

When a conure is looking for attention, they might growl, chatter their beak, and even screech. Both large and small conures are able to mimic human speech or other sounds that they hear around them.

In the wild, speech is a very important part of these birds’ lives as it helps keep the flock together – when one can’t communicate well with others in the flock because they have a speech impediment, it can cause great stress on the individual.

Speech is also how they bond with their owners and vice versa.

Conures are some of the most colorful birds in the world.

Most conures are predominantly green, with red feathers as well that make them seem to glow! A few have yellow or blue on their heads and wings.

Usually, they will not be found in a mixed color of browns, and oranges like some other parrots might be – though there are exceptions to this.

Here are a few popular specimens you can find:

Caring for the Conure

While conures are not among the toughest birds to take care of, taking care of a bird is different from other animals. You need to understand the different types of food, how much they eat per day, and their habitats.

The first thing you’ll need to do is prepare your bird’s living area. You’ll need to provide them with a cage or other container that allows them enough space and light. It should also be large enough so they can fly around without getting exhausted, but not too big because this will make it hard for you to keep the place clean.

Next, make sure your conure is mentally happy because this will affect their physical health. Conures need to feel like they have a safe place to get enough sleep and eat well, so make sure you provide plenty of toys and other things that interest your bird (they may be different from what interests others!).

You’ll also want some leaves or branches inside the cage to mimic their natural l environment.

Note that birds are prone to depression, so be on the lookout for any change in behavior or appetite.

Just like any other animal, conures are unfortunately prone to develop certain health issues. With proper monitoring and quick reaction, you can save your bird from a world of pain.

One of the most common problems is a mite infestation. Mites are tiny, eight-legged bugs that feed on feathers and skin–you may be able to see them or feel their presence if they’re there in large numbers. The next common problem is fatty liver disease which can often be caused by excessive fat intake (i.e., too many fatty foods).

One more condition to watch for in conures is beak overgrowth. If the conure has been using their beak instead of their feet to get around, it can cause excessive growth in the bone that’s supporting its beak–often resulting in deformity or even infection.

Allergies are also more common among these birds than others because they come into contact with a greater variety of pollen, dust, and mold. Preventative treatment for common conditions is recommended to ensure your bird has a long life and stays happy in the home environment.

Conures are omnivores which means they’ll eat anything from plant life (fruit/vegetables) to insects or other small animals (such as eggs). You should also feed them special pellets designed specifically for conures because it has all the vitamins and minerals they need in one easy package!

If you want to give your conure a special snack, chews are good for your bird to chew on and keep its beak healthy. You can buy these in pet stores or make them at home from fresh vegetables such as carrots, broccoli, celery. Cut into small pieces, so it’s easy for the bird to eat; you don’t want a big chunk of food blocking its throat!

Conures also need a good amount of water to stay hydrated throughout the day, so be sure they always have fresh water available!

Birds of all species need exercise, and conures are no different. If you don’t provide it for them in your home, they’ll find a way to get some on their own! This could be by perching or walking around the cage constantly.

They need at least an hour of exercise out of the cage each day unless another parrot needs one-on-one time. You can play with your bird to provide this, but they also need to be able to fly in an open area if you can’t.

Where to Adopt or Buy a Conure

Conures are popular pets in North America, so they are easy to find.

There are different places you can adopt or buy a conure from like a pet store, shelter, rescue group, and even breeders who specialize in them.

The price will vary wildly depending on which species is being bought and its rarity. Some common specimens go for $100, while rare kinds have reached 5 figure pricing!

Keep in mind that adopting your bird will not be the only cost involved, as they will need a cage, food, toys, and most importantly – veterinary care.

The best place to adopt or buy your conure is from an experienced breeder because they are knowledgeable on the specific needs of that breed and can provide you with any necessary advice before you take them home.

If you are looking for a beautiful, sociable pet that will make your life more fun and interesting, then consider the conure. These birds have so much to offer in terms of personality and beauty. They are also very smart, which means they can be trained rather easily.

Conures need lots of affection from their owners, but with enough love, these pets will show it back tenfold! We hope this blog post has been informative about what conures do best, as well as some pros and cons for owning one yourself.

We have plenty of articles available about birds on our blog, so don’t hesitate to look around and soak up the knowledge!