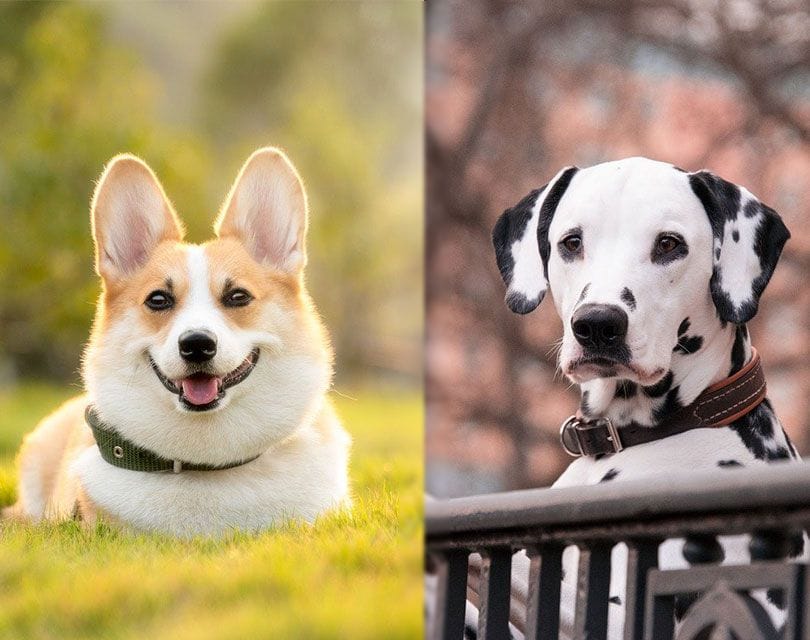 When we breed a Dalmatian with a Corgi we get the Corgi-Dalmatian a cute medium sized dog that has not yet really been given a cutesy blended name, though you can find some owners online referring to them as Corgimatians. This is a dog meant to be a companion who will live for 12 to 15 years. When many people think of Dalmatians they think of the movies and the puppies. In the Corgi-Dalmatian we get a Dalmatian looking dog that is the size of a Corgi, much like having a Dalmatian puppy all the time.

Where does the Corgi-Dalmatian come from?

In the last 15 to 20 years it has become a popular trend to breed two dogs to create an unusual mixed breed, and then give it a blended name. The Corgi is a popular dog breeders use as one half of the gene pool, people like their unusual look. For breeders who have respect and love for dogs it is done responsibly with two healthy dogs and the hope is to bring the best of both dogs into one. This cannot be guaranteed though, results can vary even in the same litter. And there are disreputable breeders and puppy mills out there jumping on the popularity bandwagon just to make some cash.

In the case of the Corgi-Dalmatian nothing is known about his origins, he does not even have an official cute name yet though Corgimation is one used among some owners on their posts. It is presumed the idea behind this breeding was to create a dog with the distinctive Dalmatian coat but low to the ground like the Corgi. Therefore to get a clearer idea of what he could be like let us look at the parents, the Dalmatian and the Corgi.

Some breeds have a detailed history we can trace, some have a couple of theories. The Dalmatian’s origins are basically unknown but Romanies were said to have come over with spotted dogs so this could be where he comes from. He was named Dalmatian during his time in Dalmatia in the area now called Croatia. Over a very long history they have been used as working dogs but in a broad range of roles from guard dogs, herding dogs, retrievers, ratters, coaching dogs and circus dogs. In England he was used most as a coaching dog, which meant he had to run before the horses clearing a path, then run alongside or under the coach. He guarded them when they had to rest too. For this reason you may notice Dalmatians today still have a natural friendship with horses. In America he was used as a firehouse dog, running with horses to fires, guarding equipment, sometimes helping to rescue people and then acting as watchdog back at the station.

Today the Dalmatian is more a companion and family dog but America’s firehouses still have them as mascots. He is a dog with a lot of energy and requires a lot of exercise. He loves attention and is happy when he pleases his owner which makes training easy. He is clever and enjoys making you laugh. He is still a great watchdog as he is very alert. Socialization and training help him to be good with children.

The Pembroke Welsh Corgi comes from Pembrokeshire in Wales where a story tells of fairies using Corgies as mounts and that they were gifted to a couple of human children. In reality there are two theories concerning the past of this dog, one says they were brought to Wales by Vikings in the 800s and another that says he is descended from dogs the Flemish brought over in the 1100s. They were used by farmers for various jobs and in the 1920s were the Kennel Club in the UK recognized them as a purebreds.

Today they are loved by Queen Elizabeth II and are also gaining in popularity in America. He is mostly used as a family dog now and is a happy and loving dog with a lot of intelligence but also with a willful side. While easy to train they would never be subservient and they are independent thinkers. The like to please and are motivated by food but this love of food can lead to them overeating and becoming obese. They are alert and make good watchdogs.

The Corgi-Dalmatian is an intelligent, sweet and playful dog that makes a wonderful companions and good family dog. He will be eager to please his owner but can have a stubborn side to him. He is loyal and dedicated to those he loves and is very affectionate. He is a lot of energy and loves to play with toys with you. He is a very cheerful dog and really would adapt well to most households.

The Corgi-Dalmatian looks like a Dalmatian in terms of his coat but is low set to the ground with short sturdy legs like a Corgi. He is between 20 to 50 pounds in weight and 10 to 12 inches tall. His long body is covered in a coat like a Dalmatian’s short and fine. He has a slightly flattened head and almond shaped black eyes. The coat is white with black spots though the pattern or formation of this Dalmatian like coat is random. His ears are erect.

Will the Corgi-Dalmatian need much exercise?

He has a lot of energy coming from two dogs who are also high energy. He will need regular walking or running a couple of times a day as well as some play time. A yard, even a small to medium one is a bonus but not required as long as he gets his exercise from other means. Without this regular work out and mental stimulation he may become poorly behaved and aggressive.

He is intelligent and keen to please and responds well to be rewarded with favorite food treats. These factors make him easy to train. He can have a stubborn or willful side though so be prepared for the occasional attempts at claiming his independence. Keep firm and consistent, be positive and it will be fine. Training and early socialization are a key factor in how well a dog behaves when he is older, how he interests with children and other animals, and how you feel about him.

What grooming needs does he have?

Dalmatians tend to have moderate to frequent shedding and since the Corgi-Dalmatian inherits a coat like the Dalmatian’s it is possible he will be a frequent shedder also. Therefore he will need to be brushed on a daily basis to keep it looking healthy and free of debris. Bathing will be be necessary as he needs it using a safe shampoo for him designed for dogs.

Dogs have nails that are not like humans, they have some live nerves and blood vessels in the lower part. This means when clipping them you need to stay above the quick or it will hurt him and cause bleeding. If you are not experienced in cutting dog nails or just prefer not to do this part of his grooming some vets will take care of it or there are professional dog groomers. Other grooming needs are his teeth which will need cleaning at least three times a week and cleaning his ears with a damp cloth once a week.

How is he with children and other animals?

If he is socialized and trained from a young age he is very good with children, with other animals and can even be good with other dogs. Otherwise he may be more aggressive with other dogs and pets. Make sure you teach your children how to play and live with dogs and that his long low back is not for riding as that could seriously hurt him.

This is an alert dog so he is a good watchdog and will bark to alert you of intruders. He may bark more as a behavioral issue if he is not given sufficient exercise. With proper training that can be corrected. He can be an apartment dog if still taken outside enough. He will need 11/2 cups to 21/2 cups of quality dry dog food divided into two meals a day. Make sure he does not overeat as he can be prone to obesity.

He is for the most part a health mixed breed but there is always the possibility he might inherit a condition from either the Corgi or the Dalmatian. Ones he may be prone to include allergies, deafness, hip dysplasia, back problems, obesity and eye problems. To have better odds you should try to buy from reputable breeders who can offer health clearances for both parents.

Costs involved in owning a Corgi-Dalmatian

The Corgi-Dalmatian puppy will cost something between $350 – $700. He will need to have medical tests and procedures done including blood tests to check on his health, neutering, deworming and a micro chip put in. He will also need some basic supplies such as a crate, a carrier bag if he is on the smaller end, and a collar and leash. This will be a cost of $480 – $600. Yearly costs for essentials such as food, medical check ups, license, treats, toys and pet insurance will be another $950 – $1050.

Looking for a Corgi-Dalmatian Puppy Name? Let select one from our list!

This as an attractive dog, he can be suited to singles or families, a house or an apartment as long as he gets regular exercise. If you love the coat of the dalmatian and the look of the Corgi this is a perfect dog for you.