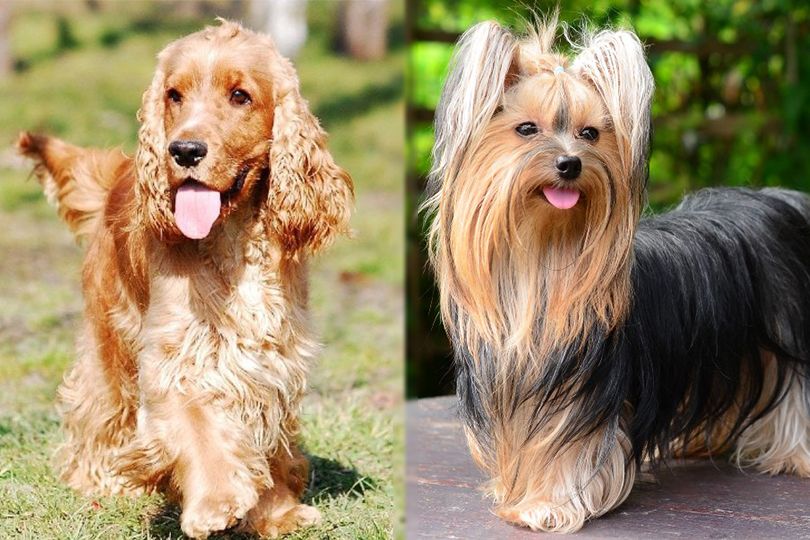 Where does the Corkie come from?

Over the last 20 to 30 years there has been an increase in the breeding of purposely bred mixed dogs. These have been dubbed designer dogs by some. Most are a mix of two different purebreds and often have a name that hints at who those parents are. A lot are bred in the US though not all. While some are being bred honestly and with thought there are unfortunately a lot being sold via backyard breeders and puppy mills. These should be avoided, this is not something you want to fund and you also will not know what kind of lines they come from. As with a lot of these dogs there are specific details on origins and intentions of when he was first bred. Therefore we take a look at the parents to get a better feel for him.

The Cocker Spaniel come from a Spanish line of dogs, and was named for his favored ability in woodcock hunting. It was not untie 1892 that he was recognized as a breed in England as for a few hundred years before that to the English spaniel was a working category rather than an indication of breed. In the 1870s he came to America where he grew in popularity and where there became a division in English Cocker Spaniels and American Cocker Spaniels.

A Cocker Spaniel today when well bred is affectionate and sweet and loves to cuddle. He also likes to be in the center of any family activity and loves to play. He enjoys being active and is alert but he also quite sensitive and does not do well when treated harshly. He can also snap if he is pain or scared. Early socialization will bring out he best side of him.

In England in the 1800s Scottish workers came looking for work in Yorkshire and brought with them a dog called the Paisley Terrier or Clydesdale Terrier. They were bred to catch rats and mice around the mills. These were crossed with other terriers and in 1861 we see the first Yorkshire Terrier then called a broken haired Scotch Terrier. In 1870 they began to be called Yorkshire Terriers because that is where most of the development happened. He came to America in 1872.

The Corkie is an affectionate and energetic little dog. He loves life, having fun, has a cheerful outlook and loves to play. He is gentle and loving, smart and good natured. He can adjust to life almost anywhere and tends to be quite obedient and eager to please. His terrier side can be some can get a little territorial sometimes. He is also very sensitive and does not like to be left alone for long periods. He can suffer from separation anxiety.

This is a small dog weighing 8 to 20 pounds and standing 8 to 14 inches tall. He is a compact and sturdy dog not a fragile one and has ears that can be erect or flop over. He has very expressive dark eyes, a black nose and his coat is straight, silky, and medium to long. Common colors are yellow, grey, black, brown, white and tan. It can be single coated or double coated. His tail is on the short side and his muzzle on the longer side.

How active does the Corkie need to be?

The Corkie is somewhat active – he likes to be playing, walking or active fairly often but being small his needs are still quite easy to meet. His owners need to be willing to go out for 15 minute walk twice a day, play some, and take him to a dog park sometimes for some off leash running, playing and socializing. He is of a size where he can live in an apartment happily and does not need a yard but it is a nice place to explore and play if you have it.

Corkies are moderately easy training. They are clever and enjoy pleasing you but results can be more gradual still. They respond best to consistent, positive training where you encourage, praise, use treats and rewards to motivate and celebrate rather than scold and become impatient. It is also crucial you are clear about being the boss. Be firm with him and do not let him get his own way. Socialization will also be very important to help him be the best dog he can be, confident and trustworthy. Sometimes when Corkies are not properly socialized they can be too timid or become snappy. House training can be difficult sometimes but remember not to punish when accidents happen. Rather try to startle them out of the act and move them to where it is allowed.

Living with a Corkie

The coat is going to need daily brushing to remove debris and tangles though you could opt to visit a groomers and have it clipped shorter to make it easier to look after. He will also need trimming around his face, eyes and ears too. Give it a shampoo and a bath just as he needs one, not on a schedule. Over bathing will dry out his skin. He sheds a low amount so loose hair around the home is not going to be a big problem though there may be a little.

Clip his nails when they get too long if you know what you are doing or have a groomer do it for you. Do not cut too low down or you can cause bleeding and pain. Check his ears for wax and infection signs and then give them a wipe clean using a cleanser and cotton ball. Also give his teeth a brush two to three times a week.

With socialization he can be good with children though he tends to be better with older children and ones he has been raised with. With them he is playful, happy, loving and comfortable. He can get along well with other dogs too though sometimes less so with other pets. That can vary from one Corkie to another and again socialization is key.

The Corkie barks rarely to occasionally and can be alert and good watchdogs. It needs to be fed ¾ to 1 1/2 cups of a good quality dry dog food a day, split into two meals.

Costs involved in owning a Corkie

A Corkie puppy can cost between $200 to $450 depending on who you are buying from, what else you get with it and where you are. He will need a crate, carrier, collar, leash, bowls and so on to start out with. These will cost around $220. Then he will need some medical tests or procedures done, a physical exam, blood tests, deworming, micro chipping, neutering and shots for about $390. Annual medical needs like flea prevention, pet insurance, vaccinations and check ups come to $460 to $560. Annual non-medical costs like training, license, food, treats, toys and grooming come to $680 to $780.

Looking for a Corkie Puppy Name? Let select one from our list!

The Corkie is best with a single or couple owner or with a family with older children. He will bring a lot of energy and life to any home he is in and a lot of love too. Just make sure you see to proper socialization and training for him and be prepared for him expecting a certain amount of attention from you.