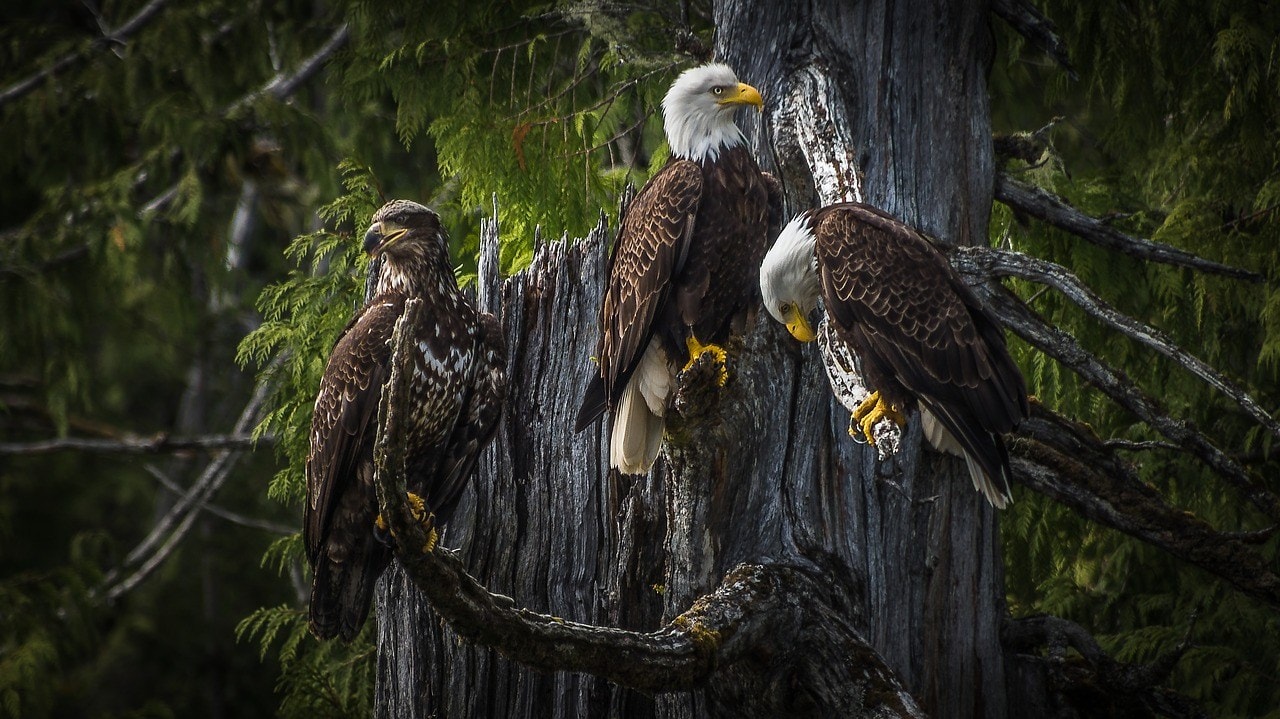 Bald eagles are incredibly strong birds and highly-skilled flyers. They are often reported as picking up cats and dogs before swooping off with them, but is it true?

An eagle would struggle to pick up and fly away with a cat, but they may attack small cats and kittens.

Eagles primarily feed on fish, and experts estimate that they can carry fish weighing approximately 4–5 pounds. An average domesticated cat weighs between 8 and 10 pounds, which puts it way beyond the carrying capacity of an eagle. In fact, by the time a kitten reaches approximately 4 months old, it will weigh about 4 or 5 pounds, so by the time your kitten leaves the house, it is likely to be too big for an eagle to carry off.

If you are concerned, you can keep your cat indoors, where it is safe from any natural predator, and you can take steps to try and scare away eagles and other birds of prey.

About The Bald Eagle

The bald eagle is a formidable bird. An adult has a wing of approximately 7 feet and one can weigh up to 14 pounds. The bird can fly at speeds of nearly 100 mph when diving, and its size and its white head and tail mean that it is difficult to miss when one of these birds swoops.

You are most likely to see a bald eagle swoop around water because its preferred food is fish. They also eat geese, gulls, and other smaller birds. Very rarely, they will dine on rabbits and small mammals, and more rarely, if at all, they may pick up and fly away with a kitten.

Because of the weight of an adult cat, an eagle will not be able to pick up an adult cat and fly away with it. Most experts agree that the maximum amount of weight that even the strongest bald eagle could lift would be 4 to 5 pounds, and an average adult cat weighs twice this, while some giant breeds can weigh three times as much.

How To Protect Your Cat From Eagles

There are some anecdotal reports of eagles attempting to attack small cats. If you are concerned about this happening, there are some ways that you can help protect your cat.

The simplest method is to keep your cat indoors. Eagles are diurnal, which means that they hunt during the day, so keeping them in at night will not keep them free from this winged threat.

Consider installing a pen or exercise run. These prevent your cat from getting out and predators from getting in, while still offering your cat some outdoor space. They can be built onto the back of your property and connected to your home using a standard cat door so that your feline can get in and out whenever they want.

Other Pets At Risk

Rabbits can be at risk of eagle attacks. Wild rabbits are considered tricky prey for an eagle, but they do occasionally get taken. So, if you do have rabbits, ensure that they are kept in a hutch or cage at night, to prevent them from being picked up and carried away.

The bald eagle is a formidable bird that is capable of flying at great speeds. It has excellent eyesight and is strong. However, the bird usually eats fish and will very rarely eat anything larger than a rodent or very occasionally a small rabbit. Cats, especially adult cats, are considered too large to be under threat from eagles, except in very rare circumstances.