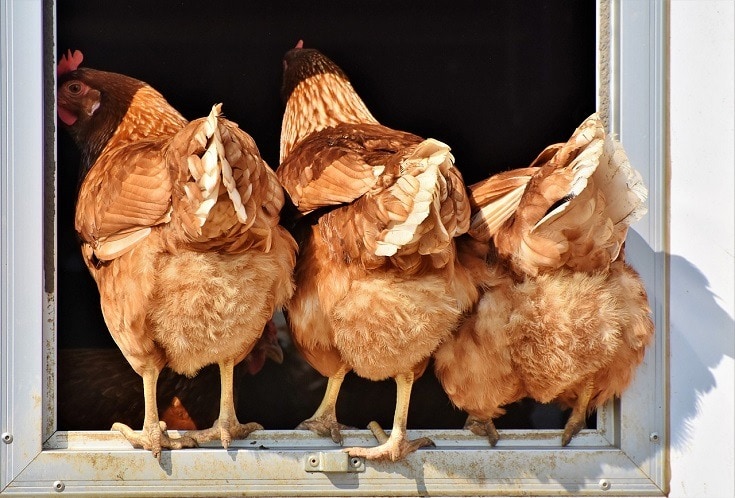 Certain questions have hounded humanity since the dawn of our existence: Are we alone in the universe? Is there a greater meaning to our lives? And most of all, do chickens fart?

If you’ve ever seriously wondered about poultry flatulence, don’t despair — we’re here to provide the answers that you seek.

Do Chickens Fart? The Truth May Shock You (But It Probably Won’t)

The short answer is that yes, chickens fart. Just about any animal that has intestines is capable of farting, in fact.

Chickens pass gas for the same reason that we do: They have pockets of air trapped inside their intestines. This air has to come out one way or another, and it usually picks the most reliable exit. Chickens can also burp, so that air has at least one other escape route available.

Chicken farts can be especially noxious because chickens are omnivores and not picky ones at that. They’ll eat just about anything, regardless of whether it’s truly edible, and some of the things that go down their gullets can create toxic fumes on the other end.

While chicken farts can certainly stink, the jury’s still out on whether they’re audible. Some farmers and chicken owners claim to have heard them, while others insist that they heard something else that they mistook for a fart.

We may not have reliable data on whether you can hear a chicken fart, but look on the bright side: It means a research job is open in the field.

Are Chicken Farts Ever a Cause for Concern?

While the idea may be funny, chicken farts aren’t a laughing matter if they mean that your pets are in poor health.

Occasional farts are nothing to worry about, so don’t stress yourself out just because you smelt what one of your cluckers dealt. If they’re passing gas all over the place, though, that could be the sign of a more serious issue.

Don’t just rely on their flatulence to get an idea of their overall health, though. Look for other signs, like bloating or drastic worsening of the gas odor. These could be signals that something nefarious is happening inside your chicken’s guts, and they should see a vet as soon as possible.

However, if you have multiple chickens, it may be difficult to determine which one’s doing the farting, so these signs may not be as useful as you’d hope.

Is There Anything That Can Be Done About the Smell?

Your chicken coop will never smell like a candle shop, no matter what you do. Still, if you have overly flatulent birds on your hands, the odor may be even worse than normal. Luckily, there are a few things that you can do to mitigate the smell.

The best way to reduce the odor is to switch the brand of feed that you’re serving your chickens. Try a higher-quality food, one without many additives and fillers, and try to make sure it offers a good mix of protein, vitamins, minerals, and calcium. This will likely cost more, but it will improve your chickens’ health across the board — not to mention improve the quality of their emissions.

Beyond that, your best bet is to keep the coop as clean as possible. Try to give them the best bedding possible; hemp is an excellent choice, as it absorbs a ton of moisture and odor while being easy to dispose of.

Spray the whole place down regularly to remove poop and other smelly debris. This will also help keep your chickens healthy, and while it won’t necessarily do much for flatulence, at least it will remove all the other offending odors that could be layered on top of bird gas.

Make sure that the place is well-ventilated too. You don’t want all those toxic fumes to just sit inside the coop, or else the smell could become completely overpowering. Putting a vent in the coop will allow air to circulate, keeping everything smelling fresh.

So yes, chickens do fart, and yes, they’re as awful as you’d expect. While this may be an unorthodox question, it’s good for coop owners to know what’s normal when it comes to their birds’ digestive practices.