Do Chinchillas Like to Be Held And Cuddled? What’s the Best Way to Hold Them? 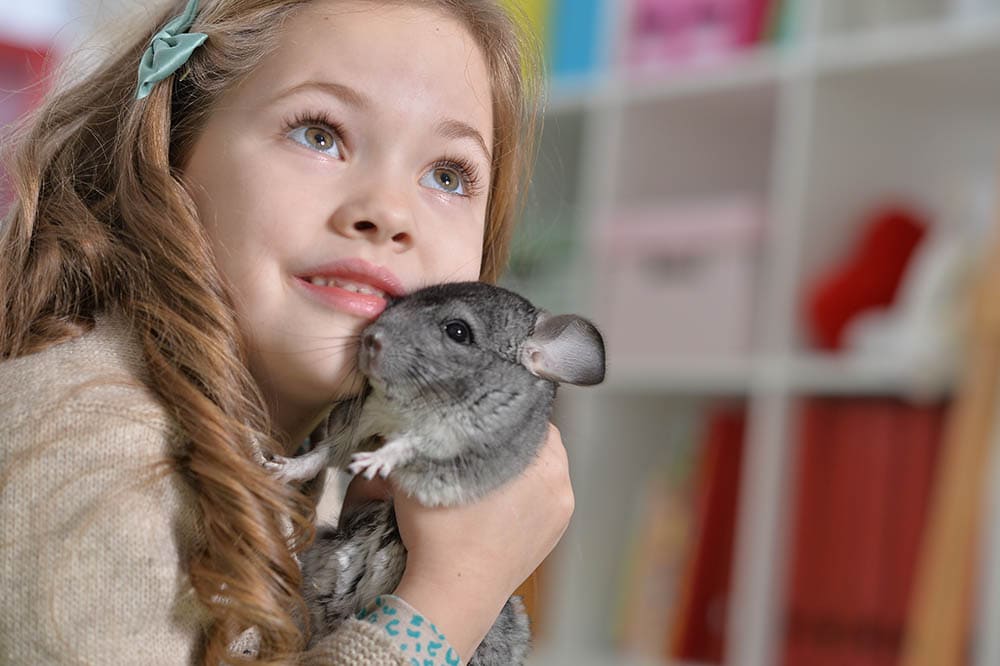 That being said, not all chinchillas like being held. Even if your chinchilla enjoys your cuddles, it’s important to train and acclimate them for human handling. That way, the chinchilla knows they have nothing to worry about when being approached and held by humans.

To learn more about if chinchillas like to be held and cuddled, read on. This guide fully details the personality of the average chinchilla and how to train reserved chinchillas to enjoy human handling. Let’s get started.

Does The Average Chinchilla Like to Be Held And Cuddled?

Despite being an exotic pet, chinchillas have friendly, sociable, and cuddly personalities around humans. Because of this fact, the average chinchilla likes to be held and cuddled. In fact, many chinchillas get sad and depressed if not given enough attention by other chinchilla friends and humans.

Especially if the chinchilla was socialized around humans from an early age, there is a high chance that the chinchilla will be cuddly and love being held. If abused or exposed to little interaction with humans may cause an individual to be more reserved than the average chinchilla, though.

Regardless, chinchillas are known to love being held and cuddling much more than other exotic pets. Chinchillas make a perfect pet for homes that want a cute and cuddly ball of fur to call their own.

How Can I Pet My Chinchilla?

Because chinchillas are so affectionate, petting them is much easier than other small exotic pets. Most likely, your chinchilla will come right up to you and not care how you pet it as long as you are being gentle and respectful.

When you first start petting your chinchilla, do not make any sudden movements and allow the chinchilla to come to you first. Because you are so much larger than the chinchilla, giving it the power to make the first move will do a lot to ease its fears.

Because chinchillas are prey animals, they especially do not like being chased around. If your chinchilla runs away from you, don’t force it to be pet. Instead, let the chinchilla be. Next time, have a treat in your hand to try to lure the chinchilla towards you.

How Do You Train A Chinchilla To Be Held?

Training your chinchilla to be held is a bit more difficult than training it to be pet. As prey animals, the chinchilla is prone to being reserved around bigger creatures until they know the creature is trustworthy. If you’ve never held your chinchilla before, you need to be gentle and patient as a result.

1. Let The Chinchilla Smell You

2. Give The Chinchilla Treats

Once your chinchilla approaches you and sniffs you, give him a treat. The treat goes a step further by showing that you aren’t just a threat, but you are a friend too. After you give your chinchilla enough treats, they probably won’t fear you at all.

3. Slowly Pick Up the Chinchilla

At this point, you can try picking up the chinchilla. If it runs away, do not force it to be held. Instead, try again tomorrow with treats. Once your chinchilla allows you to pick it up, only hold it for a couple of minutes or set it down as soon as it starts acting scared. Continue giving your chinchilla treats throughout the process.

Eventually, you will build up enough trust with the chinchilla that you can hold it for long periods of time. Always be gentle and careful when holding your chinchilla and providing it treats.

How Often Should I Hold My Chinchilla?

While you are holding your chinchilla, make sure to pay attention to its mannerisms. If the chinchilla is shaking or acting scared in any way, put that him down and try again tomorrow. Even though chinchillas need play time and attention, forcing playtime when they’re scared is a very bad decision.

Why Does My Chinchilla Shake When I Hold Him?

Except for neglected or abused chinchillas, these creatures tend to be very active, social, and love being cuddled and held. If you get a chinchilla when it’s a baby, you can easily socialize it to love your attention.

Chinchillas that are neglected or bred by irresponsible breeders may be reserved. For this reason, it’s important to select a breeder that is responsible and cares for the chinchilla. That way, the chinchilla will be acclimated to people and attention from a young age.

Of course, certain chinchillas will be more reserved than others, even if they were bred by reputable breeders. Always pay attention to the chinchilla’s mannerisms and don’t force your chinchilla to be held if it appears scared. Most likely, your chinchilla will warm up to you if you are patient and kind.