Do Crows Make Good Pets? 7 Things You Need to Know! 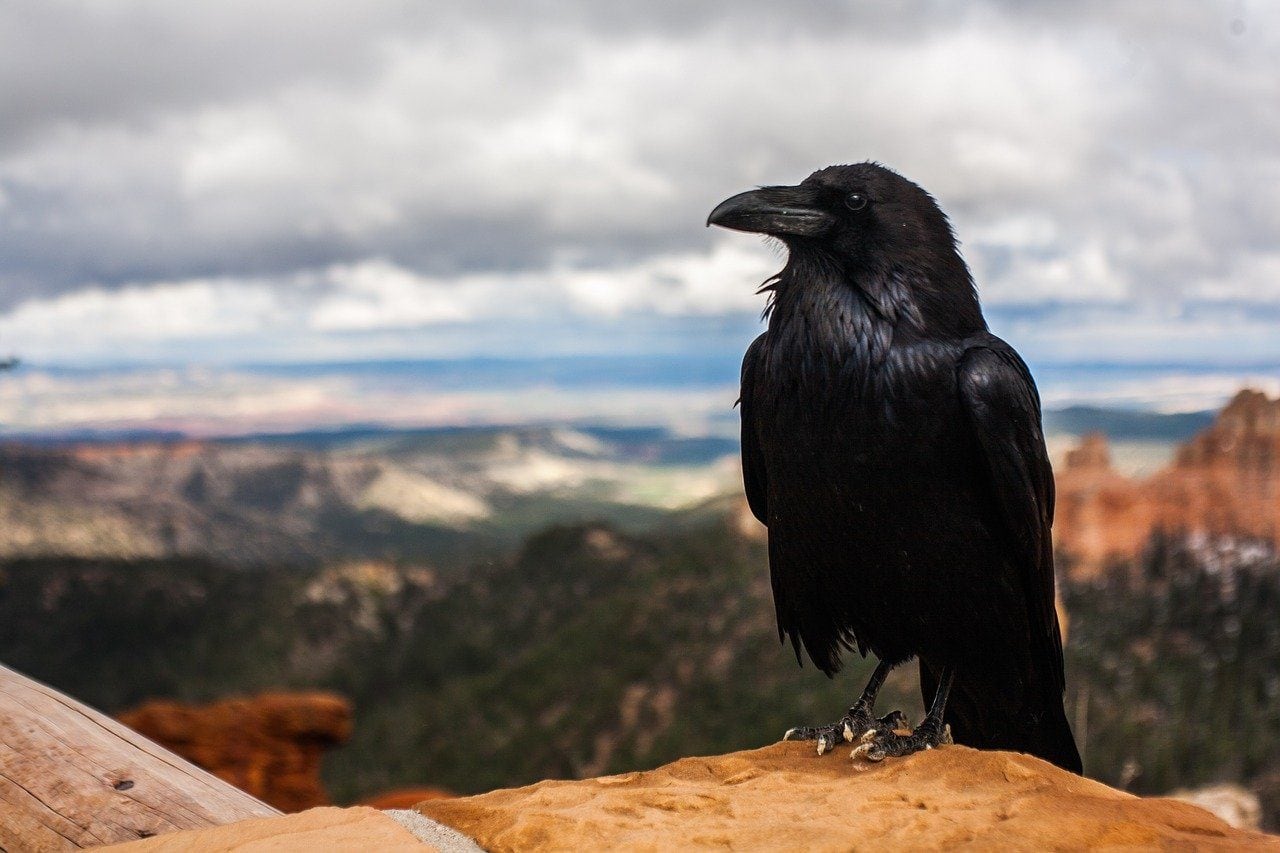 For animal lovers, it’s hard to deny the lure of keeping just about any type of animal as a pet. Of course, intelligent animals like crows get moved to the top of the list. Many people even befriend the crows that roost near their homes or in the local park. Since they make good “friends” in this manner, it seems reasonable to think a crow would also make a great pet, right? Of course, reality and our desires aren’t always in line with each other. So, do crows make good pets? If you’re considering keeping a crow as a pet, you’ll need to know these seven things first.

Have you ever met someone with a pet crow? If your answer is yes, it’s certainly a surprise. You’ve certainly seen crows out and about in the world, flying in the skies, roosting on nearby homes, or even scavenging food in the park. But you’ve probably never seen a crow in captivity, and there are good reasons for this.

The stark reality is that crows don’t make good pets under any circumstances. They’re just not built for life in captivity. Crows are too intelligent to be cooped up and they need a lot of room to move around. In captivity, a crow’s life expectancy is significantly reduced versus living in the wild. They can face health problems and many mental concerns, but that’s just the start of the problems that can arise when you attempt to keep a crow as a pet.

7 Things You Must Know About Crows as Pets

There are no domesticated crows, so if you’re planning on keeping a crow as a pet, you’ll have to capture one in the wild. This creates an obvious moral dilemma. Think about it this way. Would you want someone to capture you from your free life in the world and put you in a cage that will be your entire world for the rest of your days? Probably not. Well, it’s really not any different for a crow. In the wild, they have full access to the entire world and wide-open skies, which you definitely can’t provide in your home. It’s cruel to remove a crow from the wild and even worse to coop them up in a cage.

2. They Need to Sunbathe

Crows love to sunbathe, but as it turns out, it’s not just for pleasure. Like humans, crows need vitamin D, and the best way for them to get it is by absorbing it from the sun during sunbathing. Granted, you could keep a crow’s cage by the window so they still get sunlight, but it’s not really the same, so your crow will likely end up being vitamin D deficient, which can cause health problems for the bird.

3. It’s Illegal in Many Countries

Crows are migratory birds. In America, they’re protected by the Migratory Bird Treaty Act, which makes it illegal to capture, kill, trade, sell, or transport any migratory bird, including crows. Granted, there are special exemptions that must be authorized by the Department of Interior U.S. Fish and Wildlife Service, but these exceptions are few and far between and you certainly won’t be granted one to keep a pet crow. This means that attempting to domesticate a crow is highly illegal; grounds for felony federal charges that could see you locked up behind bars facing some major fines!

Imagine if someone stole you away from your family and kept you locked away in solitude until you died. You’d be incredibly lonely and would almost certainly suffer ill mental health as a result. Crows are also very social creatures, just like humans. If you separate a crow from its family, you’ll be dooming it to a life of solitude and depression.

5. They Go Crazy in Captivity

Crows are highly intelligent creatures. They need to exercise their minds as much as their bodies. It’s said that attempting to keep a crow is like caring for a two-year-old child that will never grow up. But it’s worse with a crow, because if the crow doesn’t get the opportunity to use its intellect, think things through, and problem solve, it will suffer detrimental mental health effects. For this reason, among others, crows become demented and go crazy when they’re kept in captivity.

Obviously, crows are birds, and birds fly. It’s unhealthy for a crow to be stuck on the ground or on a perch with no way to achieve flight. Your crow would have to spend at least a few hours a day flying, which would require a downright massive cage! You’d need an aviary to keep a single crow, but few people have that much space to devote to such things, not to mention the expense of building one.

7. Medical Care is Near Impossible

Because keeping a crow is highly illegal, when it needs medical care, which will be necessary at some point, you’ll have nowhere to get it. Veterinarians won’t be of any use to you since they’ll have to report you and your crow to the authorities. So, you’ll have to take care of all your crow’s medical concerns yourself. How much do you know about avian health? Probably not enough to take care of a pet crow for its entire life without any professional help.

What if You Find an Injured or Abandoned Crow?

We’ve established that keeping a crow as a pet is a terrible idea. But what if you find an injured or abandoned crow that needs help? Is it then OK to take the crow in and provide care? Absolutely not. If you attempt to help the crow, it might imprint with you, meaning that it could accept you as a parent, putting it at a disadvantage for life. For this reason, wildlife experts hide their faces when working with baby crows. If a crow imprints with a human, they could begin to see people as help and even approach them at random, which could be inherently dangerous for the crow.

Even if you find an injured crow, you should not approach, touch, or keep the animal. Instead, call Wildlife Protective Services. They’re professionals at dealing with exactly these types of situations and will be far better equipped to handle it than you are. Plus, you’ll be saving yourself an investigation that would likely result from taking the crow, which, if you’ll remember, is highly illegal on a federal level.

What to Do Instead of Keeping Crows for Pets

You love crows and now we’ve dashed your hopes of keeping one as a pet. So, what’s a crow lover to do at this point? Don’t worry, you’re not out of options yet. In fact, you have three great choices, depending on how much time you want to invest into crow friendships and care.

Crows are known to be very friendly, social creatures. It’s not at all uncommon for people to befriend entire flocks of crows that live near them. By offering crows healthy foods such as dried pet foods, peanuts, and more, you can begin to build trust with the animals over time. It takes repeated feeding, and you have to make sure that it’s legal to do this where you live, but after long enough, the crows will know and trust you, and a friendship can begin to form.

Wildlife Protection Services are based in most major jurisdictions. They’re the ones who handle the wild animals that need help. If you volunteer with your local chapter, you’ll get the chance to work with wildlife that they’re helping to rescue. Granted, you won’t always get to work with crows, but when they do come in, you’ll be in a great position to get to interact with them.

If you want a more serious way to be deeply involved with crows and other wildlife, you could become an accredited wildlife rehabilitator. You could even work specifically and exclusively with crows if you so desire. Following this path is a major life choice and will take a lot of work and sacrifice, but if you’re dead-set on getting close with crows, this is probably the best way to do it.

Crows are very intelligent birds with friendly dispositions that endear them to many. But crows make terrible pets for a variety of reasons. It’s a bad situation for both you and the crow. A crow kept as a pet will go crazy in confinement, away from their friends and family, lacking the space, exercise, and mental stimulation necessary for their health. And you’ll be at risk of federal felony charges for keeping wildlife illegally. It’s best to just befriend your local crows at the park or pick a career that allows you to rehabilitate them. But whatever you do, don’t attempt to capture a crow and keep it as a pet. The consequences could be severe.