Do Ducks Have Tongues? What You Need To Know! 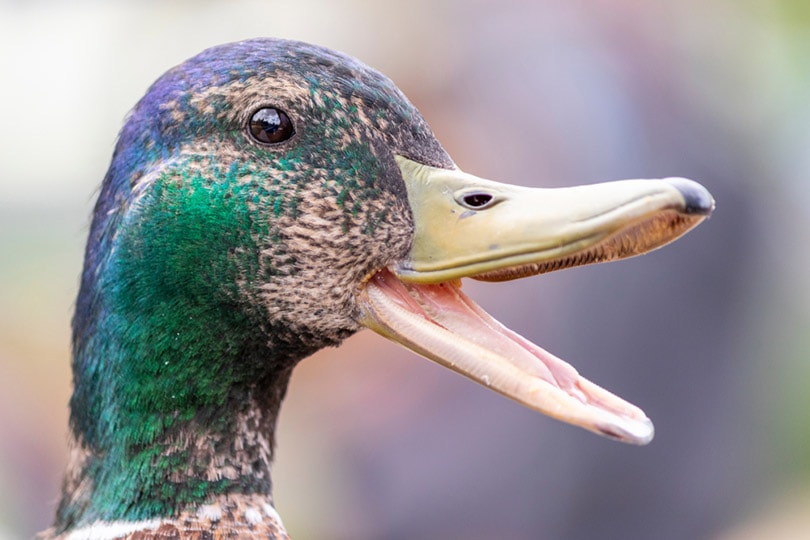 We suppose stranger things have come up in conversation than wondering if ducks have tongues. After all, when it dawns on you that you’ve never seen a duck’s tongue, you may conduct a quick Google search to end the mystery once and for all.

Ducks use their powerful beaks to pluck foliage, bugs, and grains. If you see them foraging for food, you might wonder if they have a tongue—or even require one. Surprisingly, ducks do have tongues, although they are much different from the human variety. Let’s dive deeper into the subject.

All About Duck Mouths

Ducks have tongues that serve a particular purpose. Unlike humans and mammals, duck’s tongues don’t produce saliva. Instead, they have salivary glands along the hard palate of the bill. The saliva then coats food and helps ducks swallow.

Ducks have bony keratin-covered mouths called beaks. Beaks are generally hard with softer textures around the rim. Rather than having traditional teeth as you might think of, ducks have spatulate-shaped teeth that allow ducks to crush food to eat easily without needing to chew heavily.

They simply pluck, crush, and swallow food—unlike many mammals who chew more extensively. This composition helps them pick, tear, and reach food, paired with a spiky tongue and uniquely shaped teeth.

Duck tongues are quite different from ours. While most mammals have tongues purely of soft cartilage, a duck’s tongue has a thin bone that runs through the organ. This bone is responsible for forming what is called a hyoid apparatus, which supports the larynx.

How Do Ducks Use Their Tongues to Eat?

Interestingly, ducks (and geese) have spikes and hairs on their tongue called papillae. These components allow the duck’s mouth to act as a sieve, essentially filtering smaller edibles in the water. They might also use their tongues for leverage when they are trying to grip food.

A duck will depress their tongue to allow water to filter through the mouth. When the duck has a mouth full, they will push the tongue up to the roof of their beak, removing excess water or dirt, to eat the remaining food they might have caught.

Does a Duck’s Tongue Help Them Quack?

But ducks aren’t only limited to quacking. They make other vocalizations like clicking, chirping, squeaking, and croaking. It very much depends on the breed and time of year.

A duck’s tongue might not play a vital role in vocalizations, but it can help with some.

Related Read: Do Ducks Have Ears? How Do They Hear?

Do Ducks Have Taste Buds?

Interestingly, ducks can taste on a very mild scale—having roughly 400 taste buds while humans have over 9,000. Ducks usually rely on their sense of smell to detect and sift out food rather than their sense of taste.

Duck Tongues Are a Delicacy in Some Countries

In China, duck tongues are considered a delicacy. They serve them up in all kinds of interesting appetizers and entrees. Some would describe the texture of duck tongue to be slightly firm but fatty, making it a juicy bite to eat.

Duck tongues are roughly 2 inches long, typically battered and fried for a perfect bite-sized snack. Even if duck tongues don’t sound like something you’d want to fry up, it is still intriguing to know about the world’s delicacies.

Was that more than you thought you would ever learn about duck tongues? Now you can tell all your friends that duck tongues are a delicacy, and they have next to no taste buds, spreading your newfound sense of knowledge to your pals.

Ducks literally have a filtration system in a singular organ. It is pretty fascinating to consider how different certain species are from our own.