Do Ferrets Get Along With Guinea Pigs? 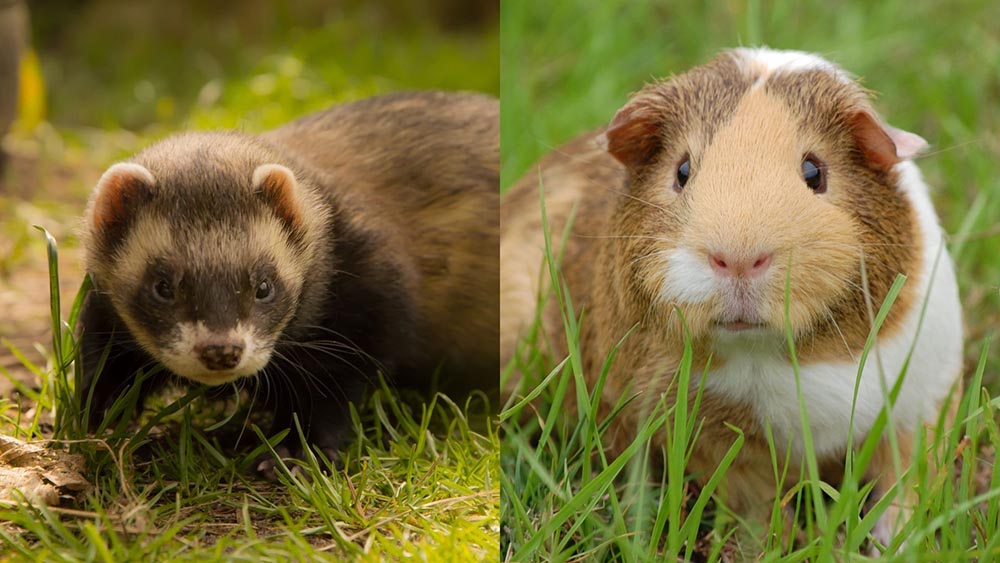 Ferrets and guinea pigs are both animals that love companions with whom they can play, sleep, or simply enjoy a good snuggle. Both pets are somewhat social animals, similar in size, but do those qualities alone make them a good match? Unfortunately, the answer is no. Ferrets and guinea pigs don’t get along and it is not a good idea to have them in the same household.

Before we start talking about the downsides of guinea pigs and ferrets living together, let’s take a closer look at both animals, their diets, and behaviors.

What Are Guinea Pigs?

Guinea pigs are rodents from the Caviidae family. They are herbivores, which means their main diet consists of fruit, vegetables, and grass or hay. They love lettuce, kay, parsley, carrots, apples, seeds, hay, etc. Guinea pigs are popular domesticated animals and very popular pets all around the world.

Ferrets are small mammals from the Mustelidae family. They are obligate carnivores and their main diet should consist of meat, organs, and bones. They are predators, which means they can kill rodents such as mice, rats, guinea pigs, and other small animals like rabbits, birds, and reptiles. Ferrets are domesticated animals but are also considered exotic pets.

Can Ferrets And Guinea Pigs Interact?

It is not a good idea to let a ferret and a guinea pig interact. As we have already mentioned, ferrets are predators while guinea pigs can be considered “prey.” You can quickly surmise how an interaction with these two animals might end.

Yes, ferrets can, and most likely will, kill a guinea pig if they meet. Ferrets have served as domesticated animals for thousands of years. The reason for their domestication was to help hunters track down pests, mostly rabbits, rats and mice. They were great at it because of their high prey drive and the ability to chase small animals into holes that cats and dogs can’t access.

Today, most ferrets are indoor pets, but the high prey drive is still in them, making them a danger to all small animals including guinea pigs. To be clear, ferrets aren’t aggressive animals and won’t attack a human, but every small animal that can awaken their predatory side is in danger.

Guinea Pigs Will Get Stressed Around Ferrets

Guinea pigs are herbivores, which classifies them as prey. They are gentle and loving animals with a heightened sense of smell and they can easily get stressed.

If we combine guinea pig facts mentioned above with a musky ferret smell, we can conclude that keeping a ferret near a guinea pig will stress this rodent. A guinea pig can easily smell a predator nearby. It’s the same story with cats. Guinea pigs will feel stressed if they smell a cat around, who is another predator that can harm and kill a guinea pig.

Can Ferrets And Guinea Pigs Live In the Same House?

We strongly recommend against living with both guinea pigs and ferrets in the same household, but if it has to happen, there are a few rules one must follow.

1. Keep Them In Separate Rooms

The only way to have both guinea pigs and ferrets under the same roof is to keep them in separate rooms. Keeping them in separate corners of the same room is not enough, they have to be physically separated. The best outcome will be if those two animals never meet. Ferrets don’t do well with small animals no matter how good the initial introduction between them was. We have to remember that ferrets are predators and guinea pigs aren’t safe around them.

2. Don’t Let Them Smell Each Other

Keeping them in separate rooms is not enough to keep them unaware of each other. Every animal we handle leaves a scent on our hands and clothes. That is a way for one animal to smell the other without actually seeing it. So, to avoid this, it is important to wash hands and change clothes after handling one pet so the other pet can’t smell what they believe is an intruder.

It is always better to be safe than sorry, so another precaution in this situation is to get a secure guinea pig cage. If your ferret somehow ends up in your guinea pig’s room, it can enter your guinea pig’s cage thanks to its flexible body. That is why it is important to keep the guinea pig cage closed at all times. If the cage is wired, the hole between wires should be 1 inch or less. We also suggest keeping the cage elevated so the ferret can’t reach it.

What If They Grow Up Together?

This is a situation where there won’t be a bond strong enough to stop a ferret from attacking a guinea pig. It doesn’t matter whether they are newly introduced or grew up together, a ferret will harm the guinea pig eventually if not immediately. This is not a possibility, it is a matter of time.

It is enough for them both to participate in one rough playtime for your ferret’s instincts to kick in. Ferrets are known to play rough, which is OK for them thanks to their thick skin, but a bite that wouldn’t harm another ferret can seriously injure a guinea pig, even kill it.

Ferrets With Ferrets and Cats

Ferrets are not all that social, so it is not a crime to only have one ferret as a pet, as long as the owner provides enough mental and physical stimulation. But ferrets do enjoy the company of their own kind, so it’s also a good idea to consider adding another ferret to an existing one or get two in the beginning. Cats can also be good companions for ferrets as long as your cat doesn’t have a high prey drive. If they do, they could consider ferrets prey, which can end poorly for both animals. Any playtime between these two needs to be supervised.

It is a challenge to introduce an old pet to the new one, especially if they are different species, but this is one combination people should stay away from entirely. The ferret can get overwhelmed by the guinea pig’s prey-like features, while the guinea pig will get stressed the moment it smells the ferret’s musk. Unfortunately, this is a relationship that doesn’t have a happy ending, so it is better to avoid it.

Related Read: Can Hamsters and Guinea Pigs Live Together? Is It Advisable?