Do Ferrets Get Along With Rabbits? 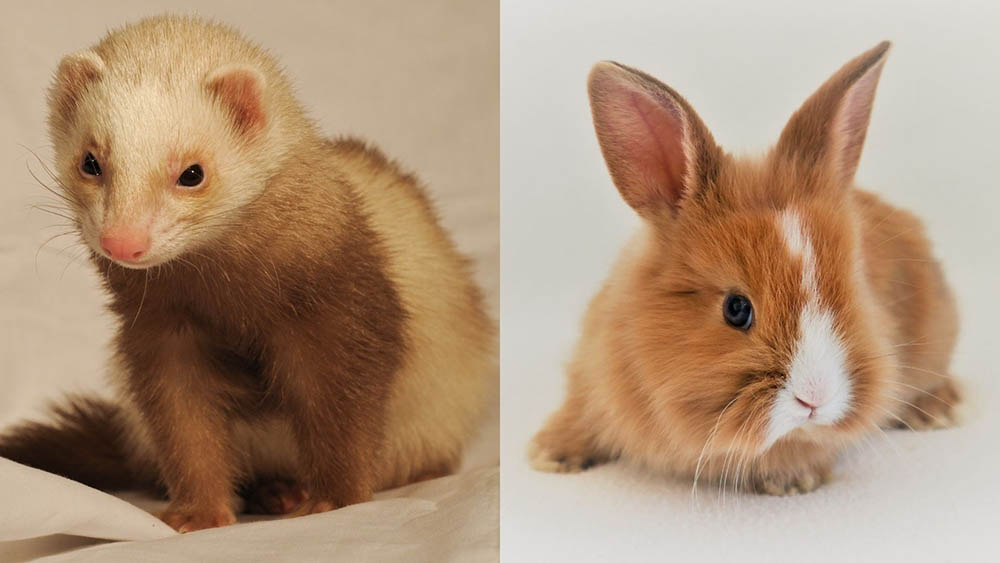 Let’s look a bit closer at the relationship between these two animals, both of whom have seen growing popularity in the pet world.

Although they could sound like a match made in heaven, rabbits shouldn’t socialize with ferrets under any circumstances. That may sound a bit harsh, but it is the truth. Before we explain why this is not a good idea, let’s share some basic information about both animals.

Rabbits are small mammals from the Leporidae family. Rabbits are herbivores that eat grass and leafy plants and they are widely spread all over the world. There are wild and domesticated rabbit species. Domesticated species are used as livestock and as pets, while wild species can be considered pests.

Ferrets are small mammals from the Mustelidae family. Ferrets are carnivores, which means that they have to eat meat to survive. They share a family with weasels, polecats, stoats, and otters. Ferrets are domesticated animals mostly used as working animals and as pets. Their wild cousins are predators.

Ferrets and rabbits share history, but not in a good way.

It all happened more than 2,500 years ago when humans started domesticating ferrets’ ancestors. The reason for their domestication was to hunt rabbits and other pests and that job is still going on today in some parts of the world. There are still places where people hunt rabbits with the help of ferrets.

How Did it All Begin?

Since ferrets are carnivores, they should eat meat. One of the standard meals for ferrets is whole rabbits alongside other small animals like mice, rats, small birds, or even reptiles. Once humans figured out the advantages of ferrets’ physical characteristics, they decided to domesticate them.

Thanks to ferrets’ strong prey drive, they were considered great hunters. Thanks to their long and flexible body, they managed to follow rabbits into tunnels, chasing them down and eventually killing them (alone or with the help of hunting dogs and humans).

We can say that rabbits and ferrets are natural enemies and they both have a big role in each other’s lives.

Can Ferrets And Rabbits Live Together?

No, ferrets and rabbits can’t live together due to their opposite natures. Ferrets are carnivorous predators, while rabbits are herbivores, prey animals to most carnivores. There is no doubt that a ferret will attack a rabbit in this situation, the only question is when it will happen.

Will a Ferret Eat a Bunny?

Yes, a ferret will most likely kill and eat a bunny, that is why it is not recommended to keep them together. Rabbits are part of the ferret’s ideal, natural diet, so a rabbit is in danger whenever it’s near a ferret. Some ferret owners who feed their ferrets with a raw meat diet use rabbit meat (among other meat) as a great source of nutrients which shows us that ferrets see rabbits as a meal. This doesn’t mean a ferret is an aggressive animal, it is in their nature to act that way.

The best thing you can do for your rabbit is to keep it away from your ferret at all costs. But, if that is not possible for some reason, there are ways to keep them both in your home without endangering the rabbit.

The best way to keep them safe is for them to not know about one another. Keep the rabbit in one room and the ferret in the other. Don’t let them share a room, don’t let the ferret enter the rabbit’s room, and vice versa. Keeping them unaware will reduce the stress a rabbit will feel once it smells the ferret and the ferret won’t feel the need to find the rabbit. Separating their scents as much as possible is crucial.

Keeping them apart is a good start but, this is not the only thing you should do. If you want to interact with both animals, you have to wash your hands thoroughly and change clothes so you don’t smell like a rabbit or ferret. Ferrets have a distinctive smell, so you can be sure a rabbit will smell it on your clothes. It’s the same story with rabbits because every animal has a smell, no matter how weak we humans think it is.

Although both animals are capable of freely roaming the house, don’t let them do that. When an animal walks around the house, it leaves a scent trail, which is exactly what you want to avoid. Set firm rules about which rooms are available to which animal. Make sure their paths never cross.

The last step you can do to keep your rabbit safe at all times is to strengthen his enclosure. Make sure that the doors on the enclosure have a lock so the rabbit can’t escape nor can a ferret enter the enclosure. If you have a wired cage, make sure that the gap between wires isn’t more than an inch big. If it is, a ferret can enter the enclosure through the gap. Also, if you can, elevate the rabbit enclosure so the ferret can’t reach it. You can put it on the dresser, on the table, or make a base for it to keep it above the ground.

Ferrets and rabbits are not a good match under any circumstance. Unfortunately, there are too many things between them to make that possible. However, if you absolutely must house them under one roof, make every effort to ensure that these two animals don’t know about each other.