Do Hamsters Hibernate in the Wild and as Pets? 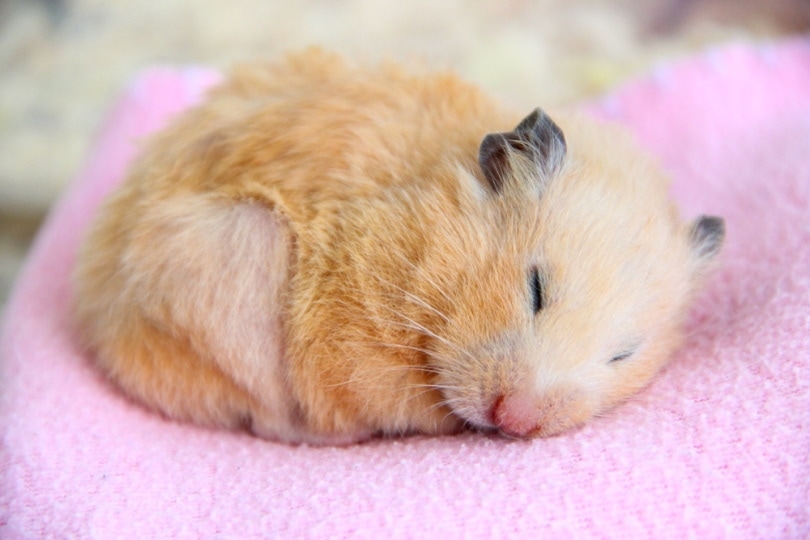 If you have ever owned a hamster, you have probably marveled at how adorable they look when they sleep. Hamsters form this perfect ball of fur and warmth while burrowed in a cozy bed they have made from their bedding. Cuteness overload! Hamsters are nocturnal creatures, so you need to wait until twilight before you can play with them. However, should you expect your hamster to sleep longer during the colder months? Many small wild mammals hibernate during the winter to conserve energy while food is scarce.

But what about hamsters? Do they hibernate? Not really. Wild hamsters are indigenous to places where the winter months do not get very cold, so they are creatures that generally do not hibernate. However, you might notice that your pet hamster seems to be sleeping longer and deeper in colder temperatures. They are in a state of torpor. If you want to know about your rodent friend’s sleeping patterns, read on! This article goes over slight changes in your hamster’s sleep pattern during the colder months, as well as some interesting hamster facts.

Although hamsters are native to China, Romania, Greece, and Belgium, they were first “discovered” in 1930 in Syria, a country with a warm and dry climate, by Israel Aharoni, a Jewish biologist. Wild hamsters will burrow underground to avoid the heat and stay hidden from predators. There are about 20 species of hamsters still in the wild, but some of those species are considered endangered.

Wild hamsters were first domesticated to be laboratory animals. These creatures are easy to domesticate and can be tamed in a few days. Hamsters are some of the most popular rodents to own as pes. The Syrian hamster is more commonly known as the teddy bear hamster, a popular pet found in classrooms and homes. Dwarf hamsters are common pets, as are Chinese hamsters.

When Do Hamsters Hibernate?

Since wild hamsters do not normally hibernate because of the natural climate conditions, pet owners often expect that their domesticated hamsters will not hibernate. However, since domestic hamsters are often found in places where they are not indigenous, you might notice a change in their sleeping patterns. While it may look like your hamster is hibernating, they are in a state of torpor. Torpor is basically a mild form of hibernation, and many wild animals go into this state instead of full hibernation. While in torpor, your hamster will have a decreased body temperature, which helps it conserve energy. Its breathing and heart rate will drop. When your hamster is in torpor, it could remain this way for hours, maybe even a day.

Is My Hamster Sick, Dead, Or In Torpor? (How to Tell)

Not knowing whether or not your hamster is sick, dead, or in torpor is a scary feeling! There are some common signs that your hamster is in torpor. First, they will be breathing very slowly, much slower than usual. Your hamster feels cold to the touch, and its whiskers will twitch a bit. Could your hamster be sick? Before calling the vet, check the temperature. If the room your hamster is quite chilly (59 degrees F or colder) and the hamster does not have sufficient bedding to stay warm, most likely, they are in torpor. Torpor is a natural way to conserve energy in animals when it is cold and does not mean the animal is sick.

What Should I Do If My Hamster Is In Torpor?

If you are concerned about your hamster being in torpor, remember that this is a natural way for your pet to conserve energy. However, if you want to ensure they are not dead, there are a few things that you can do:

Do not try to shake a hamster to get them out of torpor. That is dangerous for the hamster and not practical. Hamsters can take 2-3 hours to get out of torpor. They begin to shiver as a way to get their body temperature rising. They might also stumble a bit when they try to walk. If your hamster has been in a state of torpor for days and does not seem to be coming out of it, you can reach out to your local vet for some advice. Give them a bit of time to get back to their normal state. Some of us need coffee first thing in the morning before fully waking up, so you might know how your hamster feels!

Now that you know some facts about hamsters and torpor, check out these other fascinating hamster facts that will make you the life of every party (maybe).

Hamsters may be small creatures, but they are incredibly resilient. That is shown how these handfuls of fluff can survive colder temperatures by going into torpor. However, not all hamsters will go into torpor if they are in rooms with consistently warm temperatures (60 degrees F or higher) and plenty of bedding. The best thing for your hamster is a caged environment that is clean, warm, and allows them to burrow when they want to sleep. And some hamster toys, of course.