Do Leopard Geckos Have Teeth? 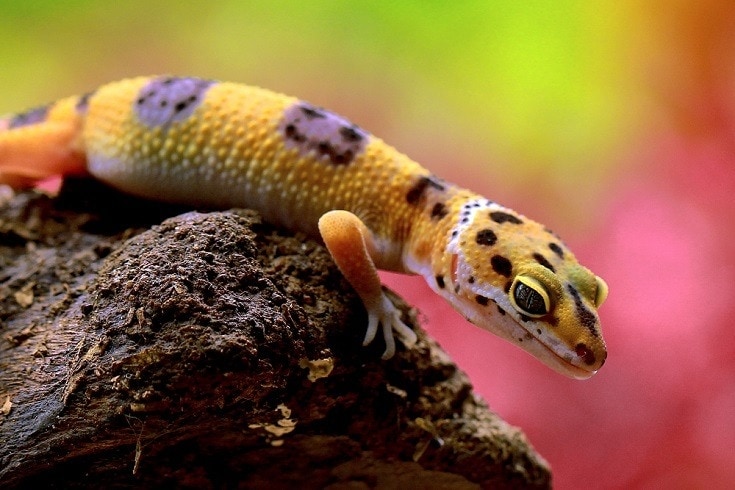 Leopard geckos are increasingly becoming some of the most popular exotic pets in the world today. However, it is important to familiarize yourself with everything you need to know about leopard geckos to see if you are comfortable with the idea of caring for one.

One of the most commonly asked questions about leopard geckos is whether they have teeth. This is a legitimate question, as most reptiles are renowned for their formidable teeth, which is why we have such healthy respect and fear of these animals.

So, does the leopard gecko have teeth? Yes, it does, and they are more than a few. A leopard gecko hatches out of its egg with 100 teeth. Yes, you read that right; one hundred teeth! What’s more, leopard geckos are polyphyodonts, meaning that they replace their teeth every few months.

Upon hearing the astounding fact that leopard geckos have 100 teeth, most people naturally want to know whether those teeth are as terrifying as they might sound. So, how do they look?

A leopard gecko’s dental formula consists of rows of tiny, conical teeth on both jaws. However, the upper jaw usually has more teeth than the lower jaw.

Fortunately, despite having rows of teeth, a leopard gecko is unlikely to bite its keeper or anyone else for that matter. This is because leopard geckos have a docile temperament and easy to tame, which is why they make ideal pets for even beginners.

Nevertheless, that does not mean that you can do anything you want to a leopard gecko and get away with it, as this critter can and will bite if it has to. However, most of those rare bites occur when the animal is scared, meaning that you must go out of your way to push a leopard gecko’s buttons for it to bite you. Ordinarily, they prefer fleeing to fighting.

Aside from protecting itself, other factors that can cause a leopard gecko to bite include:

Despite their docile temperament, leopard geckos are fiercely territorial, which is why experts recommend keeping only one lizard per tank. This territorial behavior is especially apparent in males.

A good way to get yourself bit by your male leopard gecko is to handle another male and then attempt to handle your pet without washing your hands properly first. The mere smell of the other male’s scent on your hand might be enough to trigger an attack.

For some reason, leopard geckos tend to be excitable when hungry, with many pet owners getting bit trying to handle a hungry gecko. This is why you are advised only to try holding a leopard gecko after feeding it.

Leopard geckos are prey to many animals in the wild. As such, a leopard gecko is genetically wired to avoid interactions with animals larger than itself, as such situations rarely end well for the gecko. Therefore, abrupt or frequent handling can be extremely stressful to a leopard gecko, and they might bite to get you to release them.

Fortunately, leopard geckos are not stupid; they will eventually learn that you mean no harm and allow you to handle them. However, you must respect the gecko’s boundaries; if they are not in the mood, do not push it.

Does a Bite From a Leopard Gecko Hurt?

It does not; it feels more like a hard pinch than an actual bite. As such, leopard geckos rarely draw blood when they bite. However, if a bite from a leopard gecko does draw blood, seek treatment immediately to avoid bacterial infection.

Leopard geckos do have teeth, lots of them. The good news is that their jaws are too weak to inflict major damage on a human.