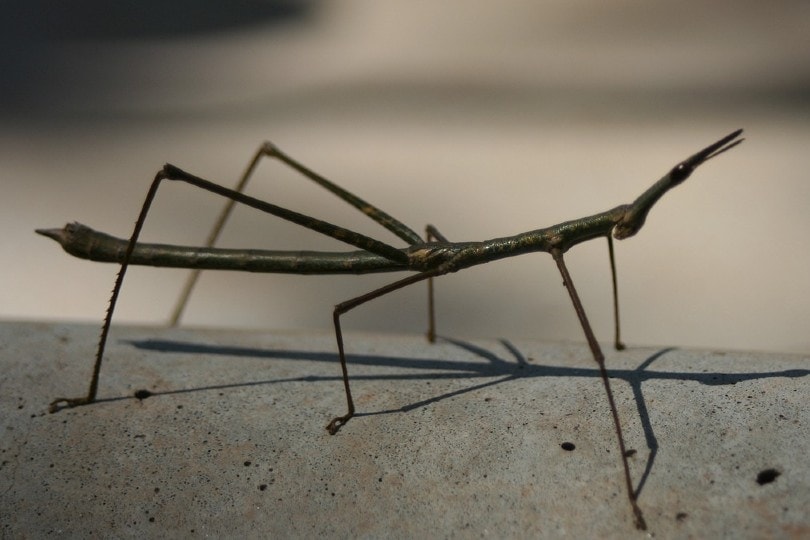 There are thousands of different walking sticks and leaf insects. Most are not kept as pets, but the Indian stick insects are sometimes seen in captivity.

While these insects are delicate, many owners claim that they are quite tame and can learn to sit on your hand. They are also low-maintenance and are capable of being left alone for a while without care.

If you’re looking for an unusual pet that doesn’t require much work, a walking stick insect may be a good choice. They aren’t the most interactive pets, but their extremely low-maintenance needs mean far less work for you.

We discuss their needs and requirements in this article. The key to keeping a stick insect healthy and calm in captivity involves mimicking their natural conditions as much as possible.

Stick insects are incredibly docile. They aren’t going to bite or otherwise harm you. They will walk around on your hands without a care in the world.

They are delicate, though. It requires a gentle hand to handle them.

For this reason, we generally don’t recommend that you handle them much at all. It may sometimes be necessary, like when you need to clean their habitat. When you can, though, leave them alone. It is far too easy to pull off a leg accidentally. They are more of a pet that you watch instead of interact with.

Stick insects are nocturnal. They will stay still during the day unless disturbed.

What Sort of Enclosure Do Stick Insects Need?

A stick insect’s enclosure is vital to their wellbeing. In most cases, your focus will primarily be on their setup. You want it to mimic their natural environment as much as possible. Otherwise, they will be unable to thrive.

They don’t require much room. Their cage should be at least 15 inches tall, though a bit higher is often better. This equates to a 10- or 15-gallon tank. You can also use glass jars, plastic containers, and similar cages.

The only requirement is that the lid is well-ventilated but also escape-proof. You can use fine netting over the top or a mesh lid.

It is best to keep their tanks on the warmer side — 70 to 75 degrees Fahrenheit is typically suitable. Their temperature can be decreased to the mid-60s at night, but warmer is usually better.

Keeping them in a warm room is best. Avoid drafts and outside-connected rooms.

Heating pads and lamps can also be used. Avoid white bulbs, as these can be visually trying and should not be used at night. Instead, choose a red bulb that is suitable for nocturnal insects.

Stick insects need a high humidity of 75% at least. We recommend regular misting and a moist substrate to keep the ventilation high. Peat moss or vermiculite is recommended.

What Do Stick Insects Eat in Captivity?

Indian stick insects consume leaves, usually from oak, rose, or hawthorn. Blackberry leaves are favorites but these can be difficult to find. Privet and ivy are also suitable.

Cut fresh branches from these trees, and place them in water to prevent drying. The water container will need to be closed off, as the stick insect may fall in and drown. Narrow-necked jars are recommended.

Many people also grow small potted plants in their stick insect’s enclosure. The insect will then eat the leaves, but not usually at a fast enough rate to kill the plant. Multiple plants are still recommended, though.

Misting the plants is also recommended. The water on the leaves will provide stick insects with plenty of water while also keeping the humidity in the enclosure high.

You shouldn’t use leaves or soil that contains insecticides or herbicides. These may be harmful to your pet. You also shouldn’t collect wild leaves near busy roadways due to possible pollution.

Stick insects shed while hanging vertically. In captivity, this can pose a small problem.

Providing them with a tall enclosure of at least 15 inches is vital. Otherwise, they will be unable to hang and shed properly. Limited space will kill the insect or cause them to become deformed.

Humidity is also essential. Otherwise, their skin may not fall off properly.

Is It Legal to Own a Pet Stick Insect?

The exact legality of owning a pet stick insect can vary. In many cases, stick insects that are not native to the U.S. are illegal.

There are concerns with escaped insects causing damage to the ecosystem, primarily since they reproduce so quickly. Species like the Indian walking stick are considered pests in many areas.

However, they are not illegal to own in every state. It varies from area to area. We recommend checking your specific state’s laws.

A permit is often required to import them, primarily because they may be considered pests. Be sure you get any stick insects from a permitted company. Otherwise, you may get in trouble for owning “illegal” insects.

Where Can You Adopt a Stick Insect?

It is often difficult to find stick insects for sale. They are usually sold in bulk, which isn’t helpful for most people. These are typically cheap, though. Usually, prices work out to about a dollar an insect, but you still have to figure out what to do with the other 49 insects that you don’t need.

Many pet stores won’t sell them because they are considered pests.

How Long Do Stick Bugs Live as Pets?

Usually, they live for 12–16 months. It can depend on the exact species that you decide to purchase.

This is a relatively short lifespan as far as pets go. You should plan on “replacing” them regularly if you want to have a pet stick bug for more than a year.

Many people keep multiple stick bugs at a time, but they may not be kept in the same enclosure.

It is difficult to determine the emotions of a stick bug. They aren’t mammals, so they likely have different conceptions of liking something. The plain truth is that we don’t know what they’re feeling or how to figure that out.

In many cases, they don’t seem to mind being handled. Most will stand still just like they were before being handled. Others will walk around without a care in the world.

Any handling should be done carefully. Otherwise, these insects can be damaged. We recommend avoiding handling them as much as possible, since they are so delicate.

Problems to Look Out For

If you’re considering keeping these insects as pets, there are several problems that you need to know about. While a stick insect can be a great pet, they come with often-not-discussed disadvantages:

On the surface, stick insects can seem like perfect low-maintenance pets. They are relatively easy to care for, and many can be left alone for a while without any ill effects.

As long as their habitat is correctly cared for, they don’t require much maintenance. Many people use potted plants in their enclosures, which lowers their maintenance even more. The bug will snack on the plants, and the plants will rejuvenate to feed the bug.

With this method, the owner would only need to care for the plant and clean the habitat.

However, there are many downsides to this pet as well. They can become ecological pests. Many have caused severe damage to native vegetation, resulting in native species losing their food sources.

They are also not legal everywhere, especially since they are labeled as pests. In many places, you may need a permit, and this is usually not provided for pet purposes.

If you keep multiple bugs together, they may breed too quickly, leaving you with hundreds of bugs to take care of.

Be sure to consider these downsides before adopting a stick insect. Many owners have adopted stick bugs, only to realize that they are more than they can handle. In some cases, they release them into the wild, causing all sorts of problems.