Do Wolves Make Good Pets? Here’s What You Need to Know! 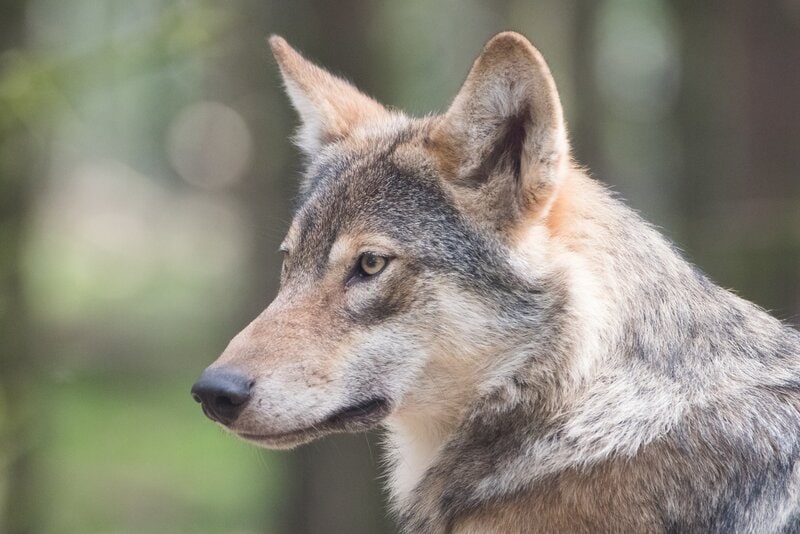 As an animal lover, it’s easy to see yourself owning any type of cute animal you see. Of course, that doesn’t mean that what you envision is always a good idea! In many cases, though cute, these animals would make terrible pets.

There’s little doubt; wolf puppies are adorable. Dog puppies are cute enough, but wolf puppies take cuteness to another level. Plus, wolves are strong, mysterious, and wild creatures. Stories abound of people being brought up as part of a wolf pack, and many children will claim the wolf as their favorite animal.

All of this adds up to the wolf being a commonly desired pet. Many people fantasize and daydream about one day keeping a wolf as their companion. But the realities of wolf ownership are far different than the dreams you might have about it. Let’s talk about what it’s really like to keep a wolf for a pet, and whether that’s a good idea or not.

What Qualifies as a Wolf?

In America, owning a purebred wolf is a federal crime. However, a wolf doesn’t need much dog in it to be considered a wolf-dog. Most of the time, when you hear someone talk about keeping a wolf as a pet, they mean a wolf-dog that’s only a few generations removed from an actual wolf. By law, a wolf must only have 2% dog in its DNA to be considered a hybrid wolf-dog rather than a wolf.

Many people think their dogs consider them to be part of a pack, but things are a bit different with wolves. Wolf puppies are born unable to see and hear. When their eyes open and they see their first sights and hear their first sounds, the first creatures they see become their pack; their entire world, and all they know. That’s a massive responsibility; especially when you’re talking about an animal with wild instincts, rather than the tendencies that domesticated animals like dogs have developed over centuries of living alongside humans.

Any pet is a major commitment. When you get a pet, you’re responsible for everything that pet needs. Large dogs can be rather burdensome for this reason, requiring lots of food and ample space to run and exercise. But no dog needs nearly as much space as a wolf. While dogs will benefit from large backyards, wolves require a good 10-15 square miles of space to stretch their legs!

Moreover, wolves need nearly constant attention. They’re very social creatures, and as their pack, you’re going to have to provide all the socialization your wolf needs. Plus, if you leave your wolf alone, you’ll be at risk of discovering something chewed up or destroyed, which is something you better get used to if you keep a wolf as a pet.

Most wolf owners don’t realize what they’re getting into. When they bring their wolf-dog home, it’s just an adorable little puppy. It looks similar to other puppies, though even now, its needs are far more intense. Still, the problems don’t start becoming apparent until the wolf reaches sexual maturity.

Once this occurs, the animal’s behavior will change drastically. Human males may not be able to approach the wolf during certain times if there are female dogs in the same home. The wolf might become very aggressive and territorial, even if it has been fixed.

Additionally, wolves start to destroy everything once they reach sexual maturity. Everything gets chewed up and scratched up. And don’t forget about the territory marking! Dogs mark their territory too, but it’s nothing compared to the frequency and strong smell of a wolf marking its territory.

Say Goodbye to Anything Nice

Naturally, with a fully grown wolf tearing up your carpets, furniture, clothing, and more, you’ll never be able to have anything nice again! This is one of the hardest parts of wolf ownership to deal with. Everything you get will be destroyed pretty quickly, so you might want to forget about updating your home!

You might be surprised to find out that wolves are actually very fond of children. They love to play with kids, but they often end up hurting them unintentionally. You see, wolves don’t understand how to play with humans, and they don’t realize how fragile human children are. Because of this, they play with human kids the same way they’d play with wolf puppies. Often, this means picking them up in their mouth and carrying them around. While this might not hurt a wolf puppy, it can very dangerous for a child and can cause great harm.

The Legality of Keeping a Wolf as a Pet

As mentioned, it’s illegal to keep true wolves as pets in America. However, a wolf must be more than 98% pure to count as a wolf, which leaves a lot of room for hybrid animals under federal law. That doesn’t mean you can go out and get a wolf-dog today as a pet. Each state has its own laws regarding the ownership of hybrid animals. Some states have outright banned such pets and others have made them legal if you get the proper permits. In some states, wolf-dog ownership is legal though, so you’ll have to use your own sense to determine if it’s really a path that you wish to take.

The obvious reason why many places have banned the ownership of wolf-dogs is the danger. Wolves don’t have the same instincts as dogs. They have predatory instincts that can’t be bred out in a few generations. Even if your wolf-dog loves you and won’t attack you, it could attack other people. Wolves are far more aggressive than dogs, and they display territorial behavior that could lead to attacks. Not even every member of the household is safe. Some wolf-dog owners have discovered that their wolves became aggressive towards them in certain circumstances, despite a lifetime of companionship. Remember, these are wild animals, even if a bit of dog DNA has been mixed in with the wild wolf genes.

Wolves are incredibly awesome and majestic animals, but they’re awful pets. Though they may look somewhat similar to dogs, they don’t have as much in common as you might imagine. Dogs have been evolving alongside humans as our companions and friends for thousands of years. Wolves, on the other hand, have been hunting and killing that whole time without any thought of partnering with humans. They haven’t developed any of the tendencies that dogs have due to their domestication. As a result, wolves can be dangerous pets, for their owners as well as other people. They’re territorial, often aggressive, and a liability for any owner. Still, they’re not illegal everywhere in the US, so depending on where you live, you might have to rely on your own sensibility to decide whether a wolf-dog is truly the right pet for you.