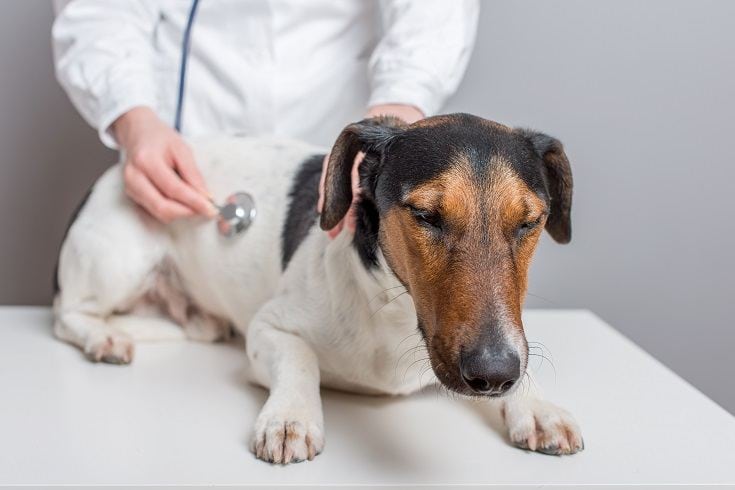 Bloat is a serious, life-threatening condition that can affect any type of dog. It is most commonly seen in larger dogs with deep chests, like Greyhounds or Bulldogs. However, any breed can be affected.

What happens is that the dog’s stomach fills with gas. Sometimes, this is the extent of the problem, and the condition doesn’t progress further. Other times, the stomach twists upon itself due to its large size. At this point, both the entrance and exit of the stomach are closed. The gas has no way out, and nothing the dog eats or drinks can correctly enter the stomach.

At this point, it is a life-threatening condition that requires fast surgery. Otherwise, the stomach may become so large that it pushes against blood vessels, blocking off blood flow to parts of the dog’s body.

What Causes Bloat in Dogs?

No one knows exactly why bloat occurs. There are several theories, including that it may occur after a dog eats and then exercises too vigorously. Stress may be a contributing factor. Age doesn’t seem to be a factor in this condition, nor is sex. Cardiac arrhythmias are detected in some dogs with this condition, though we don’t know whether this is a cause or a symptom.

One study found that dogs with bloat were likely to have foreign bodies in their stomach. This may be a risk factor, though more studies are needed to confirm the findings. The sample only included 118 dogs.

Is Bloat an Emergency?

Yes, bloat should be considered an emergency. It requires immediate vet attention. If you notice your dog showing symptoms at night, you need to locate an emergency vet. The dog cannot wait until morning. Surgery must take place before the stomach becomes so large that it begins cutting off blood flow.

What Dogs Are Prone to Bloat?

Larger breeds with deep chests are more prone to bloat, though we don’t know exactly why. Great Danes, St. Bernards, and Weimaraner are more likely to develop bloat. However, technically any dog can be affected by bloat.

Bloat happens most often after meals. However, it can occur at any time. Dogs who eat more than one meal don’t seem to be at an increased risk. In fact, their risk might be lower.

Some think that more “hyperactive” dogs are more prone to bloat. However, there is little information on this currently. There may be a connection between moving around too much after meals and bloat. But we don’t actually know if the activity is the cause of the bloat.

Are There Any Risk Factors for Bloat?

Most of the risk factors for bloat are our best guesses. We don’t actually know much about what causes bloat, so it is difficult for us to say what puts dogs at a higher risk of it. However, the following have been purposed as risk factors:

If you’re looking to decrease your dog’s risk for bloat, you can attempt to avoid these risk factors. Some of them are changeable, though others are not. Feed your dog more than one meal a day, and avoid moistening dry food. Ensure that your canine stays at a healthy weight, and attempt using a slow feeder if your dog seems to consume their food too fast.

On top of that, you may want to consider adding canned food to your dog’s diet, which may help decrease their risk.

The only difference between these two conditions is that volvulus involves the stomach twisting. This is more serious than just bloat by itself. However, both conditions are nearly impossible to tell apart without diagnostic tests. They are treated almost identically. In most cases, it doesn’t matter which one your dog is affected by.

How Do You Know if Your Dog Has Bloat?

The symptoms of bloat are a bit difficult to identify. Often, owners will not realize that their dog has bloat until the condition has already progressed, which can make treatment difficult.

The most obvious symptom is a hard, bloated stomach. This is usually seen most on the dog’s left side. If you tap on the bloated area, you may hear a dull echo inside. This is because the stomach is mostly empty except for the gases.

Many dogs will attempt to vomit but will be unable to pass anything. If a dog is vomiting, they likely do not have bloat. However, if they are only attempting to vomit, it is a sign that their stomach may be twisted. Drooling is quite common as well.

Many dogs will react with pain if their abdomen is touched. Most will act generally distressed. They may be unable to get comfortable and pant, which is also a sign of pain. Shaking is common in some dogs as a pain response.

What Happens If Bloat Goes Untreated?

If bloat is not treated in a timely fashion, it always means that the dog will pass away. Typically, the stomach will press on the large veins in the abdomen that carry blood to the heart. This causes their circulation to fail and can cause a breakdown of tissue. The dog will go into shock within a few hours in most cases.

The pressure from the gas will not allow the stomach’s blood to circulate properly, which can also cause tissue breakdown. Eventually, digestion toxins build up in the blood, which may cause the dog’s shock to worsen. Eventually, the stomach wall will rupture.

How Long Can Dogs Survive With Bloat?

Dogs can die within a matter of hours from bloat. They must be taken to the vet immediately. The answer to this question depends mostly on how fast your canine’s stomach fills up with gas. This could be quickly or slowly. Furthermore, some dogs develop shock symptoms earlier than others, which will affect their outlook as well.

Can Dog Bloat Resolve on Its Own?

No, bloat and GDV do not resolve on their own and require fast veterinary care. Surgery is required in most circumstances. Otherwise, the dog’s stomach will continue to fill with gas until it eventually bursts.

What Is the Treatment for Bloat?

It is imperative that you visit the vet as soon as possible. The pressure on the internal organs must be relieved quickly. Otherwise, blood flow will be compromised. If the stomach is not twisted, a stomach tube can be inserted, which will help relieve some of the pressure from the gas. Otherwise, a large needle may need to be stuck through the skin into the stomach to relieve pressure.

If the dog is in shock, then treatment must happen as quickly as possible. Usually, fluids and emergency medications are used. Exactly how much stabilizing the pet needs depends on the seriousness of their condition.

Once the dog is stabilized, surgery is required. Sometimes, this must be delayed until the dog is strong enough to undergo anesthesia. Surgery is required to return the stomach to its natural position and remove any dead tissue that has accumulated. The vet may also perform a variety of different techniques to prevent bloat from happening again. Sometimes, the stomach is sutured to the abdominal wall to prevent it from flipping. Other times, the opening of the stomach is enlarged to improve flow.

What Is the Outlook for a Dog With Bloat?

Fast treatment is essential to the dog’s survival. However, it doesn’t necessarily guarantee success. The severity of the shock, necrosis, and other factors do play a role in how well the dog does with treatment. Even in an uncomplicated case, the mortality rate of bloat is around 20%. Heart arrhythmias increase the mortality rate to 38%.

Necrotic tissue pushes the mortality rate higher, though how much is dependent on the amount of dead tissue.

Dogs that survive surgery and recover from shock typically recover completely. There are no serious complications that often occur after an incident of bloat. It is more of a matter of the dog surviving the surgery or not.