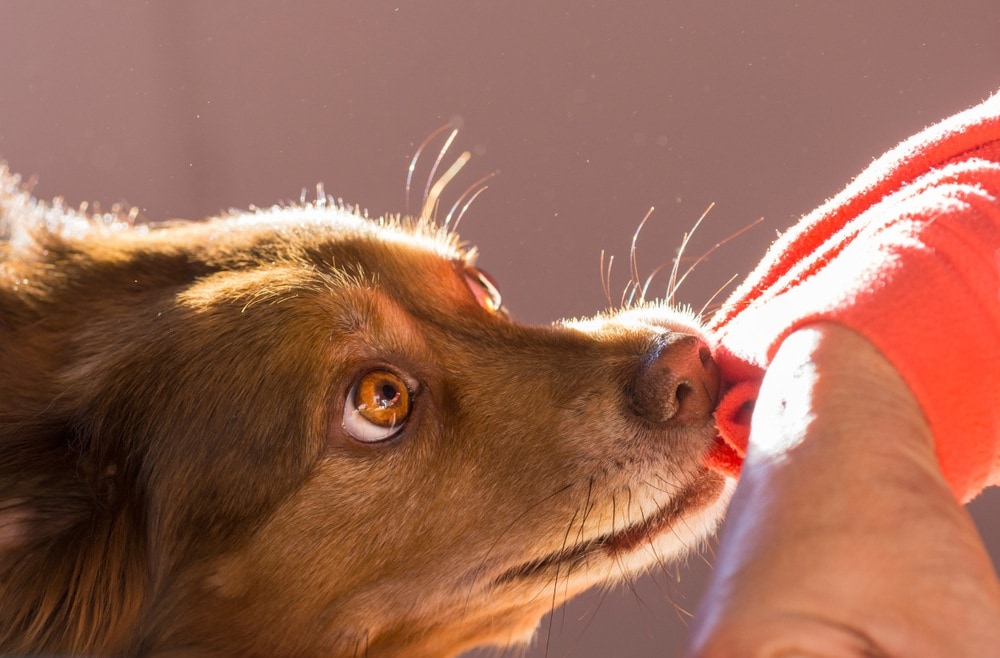 People tend to think of large, vicious dogs when they imagine being bit by one. But the truth is that many types of dogs are known to bite humans, whether provoked or not. Not all dog bites require medical attention. But many are serious enough to cause the need for hospitalization. Some dogs even kill the human victims they attack, but this scenario is incredibly rare.

It’s a good idea to know which dog breeds are most likely to bite humans in case you find yourself facing a biting dog without an owner around to control it. However, it’s important to remember: just because a breed tends to bite humans, that doesn’t mean that they all do.

It’s better to give a dog the benefit of the doubt rather than overreact and create a challenge for the dog. You should also understand why dogs bite to ensure that you don’t instigate an attack for any reason. Here are the top 10 dogs who most frequently bite humans.

It should be no surprise that the Pit Bull would make it on a list of dogs that tend to bite humans. These dogs have historically been bred to fight, and their fighting instincts are a serious concern for Pit Bull owners and neighbors of these dogs alike. But the truth is that this strong breed can be just a loving and affectionate as any other dog. These dogs typically only bite humans when they or their owners are feeling threatened.

Staffordshire Bull Terriers are working dogs and have been used on farms to hunt and herd other animals throughout the years. These dogs need a great deal of exercise and stimulation to stay happy and content. If they’re bored, scared, or otherwise unfocused, they could turn to biting humans that get too close to them or make them feel uncomfortable in some way. These dogs should always be treated with respect, and humans would be smart to keep a safe distance from any Staffordshire Bull Terrier they don’t personally know.

Rottweilers are awesome watch dogs, and their bark is typically worse than their bite. But if a Rottie feels cornered or thinks that their family or home is in danger, they will turn to biting to protect themselves and their surroundings. These dogs have powerful jaws and an incredible bite force that can seriously injure another dog or a human if a bite occurs. But most Rottweilers are well behaved and sociable, so you shouldn’t be afraid upon meeting one unless obvious aggressions, such as growling and barking, is being displayed.

German Shepherds are powerful dogs that aren’t usually aggressive by nature. However, they have a strong bite that can seriously injure a human. Like most other large, strong breeds, these dogs won’t hesitate to bite someone in order to defend themselves. If disorder is perceived, a poorly trained and exercised German Shepherd can become scared and decide to use biting as a coping technique. You should always know the dog and the owner before freely spending time around a German Shepherd.

Terriers have been used for hunting rodents and other vermin since their inception. They are working dogs and expect to have something to do on a regular basis. Their primal instinct is to bite out at their prey in an attempt to stop them in their tracks. Terriers may bite humans for a variety of reasons, but teasing and boredom tend to be serious antagonizers. Children who pull tails and fur are especially prone to terrier bites.

Loyal and protective, Boxers are beautiful dogs that love to play yet also love to protect. They don’t take lightly to their guarding duties and will bite when necessary to maintain a dominant stance. However, most Boxers are well-rounded and would never think of biting a human, let alone another dog unless they feel that there is no other choice. Sometimes Boxers will accidentally bite when they’re playing, and they get too rambunctious. But these bites rarely result in serious injuries.

While the Siberian Husky has a loving side, it also has an unpredictable temperament. These dogs are thought to be one of the five most dangerous dogs when it comes to biting and aggression. Siberian Huskies don’t always just bite. Sometimes they maul, and that mauling can result in serious if not fatal injuries. Sadly, many attacks that are reported for this breed are against children. Kids should always be supervised when interacting with the Siberian Husky.

Jack Russell Terriers are small and cute, but they are just as much of a hunter as any other Terrier is. They are genetically predisposed to hunting small animals, but they can focus their aggression on larger animals and even humans when they feel threatened. These dogs need proper training and a regular outlet for their high-energy personality. Without it, the risk of biting humans is a serious threat.

Even little dogs like Chihuahuas bite humans sometimes. In fact, some statistics show that Chihuahuas are more aggressive than Pit Bulls. Sure, a Chihuahua bite wouldn’t be as serious or painful as a Pit Bull bite, but who wants to get bit by a dog of any size or breed? Chihuahuas are often called “ankle biters” because of their biting tendencies. Perhaps this is due to their ability to get away with more things than their larger counterparts. This is sometimes referred to as “small dog syndrome.” These dogs need training and discipline just like any other breed.

Great Danes are beautiful dogs that are considered huge breeds by most folks. They can stand as tall, if not taller, than a human when on their hind legs. Getting bit by a Great Dane wouldn’t feel good in the least. While these dogs don’t bite often, they are known to attack humans when they feel threatened, especially in their own environment.

Even though the dogs on this list have been known to bite humans from time to time, they all still make great family pets when training, exercise, socialization, and proper nutrition are made a priority.