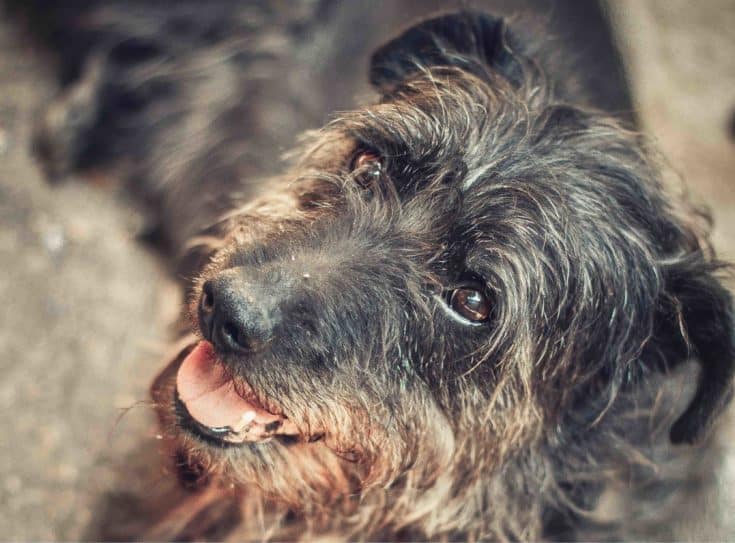 The Doberman Pinscher bred with the Standard Poodle produces puppies now called Doodleman Pinschers. This is a large dog who should live for 12 to 15 years. He has talents in herding, watchdog, racing, sighting and military work. He is one of the larger crosses known as designer dogs. He is a dog with a big heart and makes a great family pet.

Where does the Doodleman Pinscher come from?

Most designer or hybrid dogs do not have much of a history since their arrival on the dog scene is fairly recent for most of them. To get a better sense of where they come from then we turn to the parent breeds and have a look at their origins and personalities. Keep in mind that while the intention here is hopefully to get a dog with the best of the Doberman and the Poodle, sometimes this does not happen. Even within the same litter you can get very different pups.

The Doberman originates from Germany, bred in the 19th century by a tax collector who needed a dog who was loyal, a good companion, but also able to protect him from thieves. German breeders after this were most focused on function rather than looks wanting to have a dog who was strongest, smartest, quickest, and bravest. But for a while the breed was seen to be too independent and aggressive. In the late 19th century another breeder called Goeller reshaped the breed into something more useable. The Doberman came to America in 1908. While his numbers went down during the first world war in Europe he continued to do well in America and the same happened during World War II. The dog was called a Doberman in Germany and then Britain and breeders continued to develop the breed into something more suited for homes and families.

Today he is affectionate, very intelligent, extremely loyal and a a great protector. He is playful and energetic and loves to mes around with the family. He is not aggressive without reason. He likes to be busy and needs a lot of physical and mental stimulation. He trains easily though he sometimes thinks he knows how to do something better! Socialization and early training are important to get a well rounded dog.

The Poodle might be all about looks in dog shows today but originally he was bred to retrieved waterfowl for hunters. This is why his coat is like it is, to protect him from the water. He is German in origin, though ancestors of Poodle before that can be found back as old the first century BC! There are three sizes and have been for hundreds of years, the standard, the miniature and the toy. The French were the ones who bred him more to how we see him today though and it was circuses and Gypsies who started the extravagant clipping styles that are still popular now.

He is a very intelligent dog, eager to please and has a great memory making him easy to train. He can be aloof with strangers but he is a warm hearted, affectionate and clownish dog in reality which makes him perfect for families, especially those with children.

The Doodleman Pinschers can have a stubborn streak but on the whole are good natured, loving, loyal, and playful. They have a daring nature and a great agility and endurance. They are even tempered and will devote themselves to their owner. Some dogs can have separation anxiety if you are away for too long. He is always cheerful when someone is around and are usually very obedient when they have been well trained.

He is a large dog usually weighing between 66 to 88 pounds and standing 24 to 28 inches tall. He has a well built body, looking muscular and strong. He has floppy ears like a Poodle with a long head and long neck. His eyes are almond shaped and brown and reflect his intelligence. His coat is medium length and can be straight through to curly and can be found in colors such as red, black, white, brown and tan. He is a well proportioned dog with a back that is straight, back legs that are angular and front legs that are strong.

How active does the Doodleman Pinscher need to be?

He is a large dog so just that means he needs a fair amount each day, plus he likes to be busy and doing something and has a fair amount of energy. He should get a couple of long walks a day along with play time in the yard. He would also enjoy jogging with you, jogging alongside you as you cycle, hiking, visits to the dog park, games of fetch and Frisbee. When not in a secure area it may be you will need to keep him on a leash. An average to large sized yard that is properly fenced in would be ideal.

He is a very intelligent dog and he is devoted to his owner and wants to please so usually he is trainable. But he does need you to establish yourself very firmly and clearly as the dominant one, otherwise his stubborn nature can hold things up. Make it clear who is pack leader, when training be positive and persistent. Early training and socialization are absolutely key to getting a well rounded, happy dog.

Living with a Doodleman Pinscher

He does not shed a lot and if his coat is more like the Poodle’s he is likely to be hypoallergenic. He has low to moderate grooming needs, he will need daily brushing to remove debris and keep his coat healthy. Baths are really only necessary when he particularly dirty. Use a dog shampoo only.

Other grooming needs include his ears, which will need weekly cleans using a cotton ball soaked in a solution your vet recommends, be careful not to push into the ear. Keeping his ears clean can help ear infections. His nails will need to be clipped though only do so if you have proper dog nail clippers and know what you are doing. You cannot cut down low on dog’s nails, they have live vessels and nerves there. He will also need teeth brushing once a day or at least three times a week.

This is a good friendly dog and he gets on will with children though it may be better to home him in places where the children are older because of his size he can knock down younger ones. Children should be trained on how to touch and play with dogs, and your dog should trained and socialized to learn the same thing back! He is also good with other dogs and other pets.

The Doodleman Pinscher is good for most climates just not very cold ones! He is a good guard dog and watch dog but while he may be suspicious of strangers he is not aggressive when he has been well socialized. He is protective though of what he perceives as his and if he views his family is under attack he will respond. He will need 3 to 4 cups of high quality dry dog food daily, split into two meals. He is known to be a moderate barker but again training will mean you have a means to control it.

Most hybrid dogs are healthy but some have hereditary health issues and in this case both the Doberman and the Poodle have several health issues they are prone to. The Doodleman Pinscher may face Addison’s Disease, bloat, epilepsy, Von Willebrand’s Disease, narcolepsy, heart problems, hip dysplasia, eye problems, skin problems and hypothyroidism.

The puppy will cost you somewhere between $375 – $1000. Being a larger dog he is not one of the top trendy ones and that keeps the price hopefully more towards the lower end. He will require blood tests, deworming, a micro chip, neutering and vaccinations when you get him. These will cost about $300 – $350. He will need a few things like a crate, a collar and leash, food bowls and so on which will cost about $175 – $200. Average non medical costs each year will cover food, training, licensing, toys and treats and so on are about $550 – $700. Average medical costs to cover pet insurance, health check ups, shots, flea prevention and so on are about $485 – $650.

Looking for a Doodleman Pinscher Puppy Name? Let select one from our list!

The Doodleman Pinscher is not your usual small and cutesy designer dog, he needs room and and a yard, and he will need firm owners who can establish dominance. He will make a wonderful family dog though, he will be loving and loyal and keep you on the move!