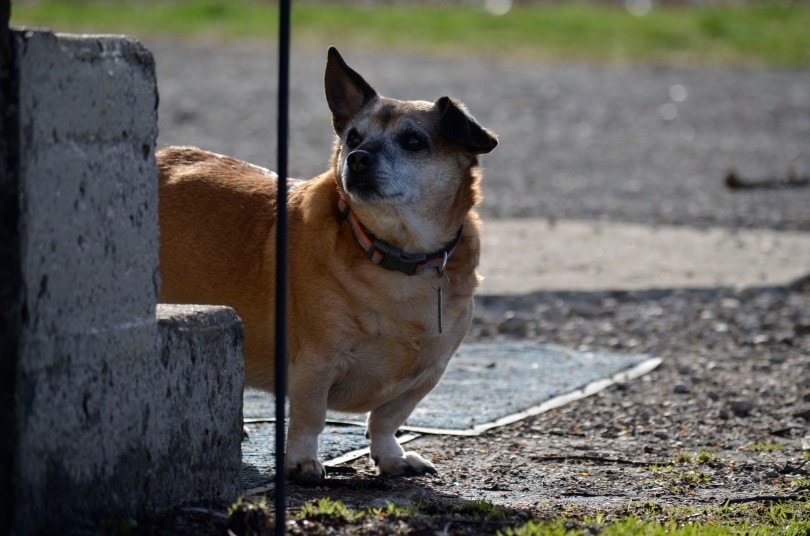 The Dorgi is a cross of the Pembroke Welsh Corgi and the Dachshund. Also called the Dorgie of a Pembroke/Dachshund Mix he has a life span of 12 to 15 years. He is multi-talented and has taken part in herding, racing, guarding, military work and sighting. He is a friendly and social dog who can be very string willed.

Where does the Dorgi come from?

It is well known that Queen Elizabeth II loves and keep a pack of Corgis at the palace but what some do not know is that amongst her dogs is also a Dorgi. The Dorgi is a designer dog a term coined in recent years to describe deliberately bred mixed dogs or cross breeds. Often it is two purebred parents and the dog is given a name that is made up of syllables or sounds from the parents names. This type of first generation breeding does not result in uniform puppies. There are a range of looks and they can vary in temperament too. Most are bred to be companions rather than working dogs and those working dogs that are bred this way tend to not have blended names and are just referred to as their type. The most obvious exception to this is the Labaradoodle who is has a blended name and is used as an Assistance dog.

Care should be taken when buying a designer dog of any kind as a lot of breeders have no care for the dogs welfare and are in it just for the money. Since there are no details on where or when the Dorgi was first bred we can look at the history if his parents to get a better feeling for the dog.

The Pembroke Welsh Corgi comes from Pembrokeshire in Wales where a story tells of fairies using Corgies as mounts and that they were gifted to a couple of human children. In reality there are two theories concerning the past of this dog, one says they were brought to Wales by Vikings in the 800s and another that says he is descended from dogs the Flemish brought over in the 1100s. They were used by farmers for various jobs and in the 1920s were the Kennel Club in the UK recognized them as a purebreds.

Today they are loved by Queen Elizabeth II and are also gaining in popularity in America. He is mostly used as a family dog now and is a happy and loving dog with a lot of intelligence but also with a willful side. While easy to train they would never be subservient and they are independent thinkers. The like to please and are motivated by food but this love of food can lead to them overeating and becoming obese. They are alert and make good watchdogs.

The Dorgi is a brave and loyal dog who loves to be social and is super friendly. He is smart and alert but quite noisy and can be energetic. He is a funny dog and very curious so is always sniffing around at things. He has a protective side and is very loyal and affectionate with his family. He loves to cuddle and is a great family pet. He does like to chew and he is quite strong. He prefers not to be left alone for long periods, and some can develop separation anxiety. He is athletic and may have herding tendencies which he may try to use on other pets and people. He is a sweet dogs who will try to please you but he can be strong willed and if has his mind set on something he is hard to pull back.

This is a small to medium dog weighing 15 to 28 pounds and standing 8 to 12 inches tall. He has a small body that is longer than it is tall. His legs are short and he has large ears that tend to be erect. His coat can be short to medium in length and fine or wiry with common colors being brown, golden, black, white and chocolate.

How active does the Dorgi need to be?

This is a somewhat active dog, he is small so even when he has his burst of energy and liveliness it is easy to handle for even people who are not able to be very active all the time. Also his size means he can live in an apartment happily and while access to a yard is a bonus place to smell and play in, it is not essential to owning him. Take him out for walks for at least 30 minutes a day, this could be done in two 15 minute walks or one longer one. Also make sure he gets off leash time somewhere like a dog park where he can run, play and socialize. He can have herding and hunting instincts so he may chase after smaller animals. It also means it is important to keep him on a leash when walking as if he catches a scent he will be off chasing it.

The Dorgi is moderately easy to train so he is not easier and quicker than most other dogs but he is not a lot longer either. He is fairly smart and he likes to please but he has a stubborn side to him that can slow things down. Early socialization and training are important to see him become the best dog he can be. Be firm and consistent with your approach and keep it a positive experience using treats, rewards and praise. As he can be an excessive barker this may be something you want to focus on to control. It can also help with controlling his separation anxiety.

Living with a Dorgi

Moderate maintenance is required for the Dorgi as it will shed a low to moderate amount and that can be heavier during seasonal shedding times. Give his coat a brush two to three times a week or more when there is more shedding. Also bathe him just as it is needed so you do not reduce the natural oils in his skin that he needs to have a healthy coat and no dry skin problems. His nails should be trimmed if they are not naturally worn down and that should be done by a professional as there are nerves and vessels in them to be careful of. His ears should be wiped clean and checked for infection once a week and his teeth should be brushed two to three times a week.

He is a good dog to have with children as he is affectionate with them and loves to play and be lively with them. He is protective but with smaller children supervision may be a good idea just to make sure the clumsy toddlers do not hurt the small dog by accident. He gets on well with other dogs and other pets but socialization really helps with that to make it better. It will also help curb any tendencies of herding or chasing small animals from hunting instincts.

This is a good watchdog as he will bark to alert you to an intruder. He is also a good guard dog and his protective nature means he will try to act in defense of you. He barks frequently which may be an issue in some living spaces. He needs to be fed ¾ to 1 ½ cups of good quality dry dog food a day, split into two meals. Take care with his food and snacks as he is prone to obesity.

This is quite a healthy dog so there is not too much to worry about, as mentioned obesity is common if their diet and exercise are not given focus. This impacts on his back and his joints. Other issues he can inherit from his parents include, Eye problems, Cystinuria, DM, Epilepsy, IVDD, PDA, Von Willebrands, Cutaneous Asthenia, Back Problems, Bloat, Cushings, Diabetes, Deafness and Hip Dysplasia.

Costs involved in owning a Dorgi

Looking for a Dorgi Puppy Name? Let select one from our list!

The Dorgi is a mixed dog with lots of personality and independence while still being affectionate and loving. If you like that look of a low down dog with a long body and short legs this could be an option for you. He has his energetic moments but as long as you can take him out for half an hour a day he is good for any owner. Just be ready for early socialization and training and you will need to focus on his barking.