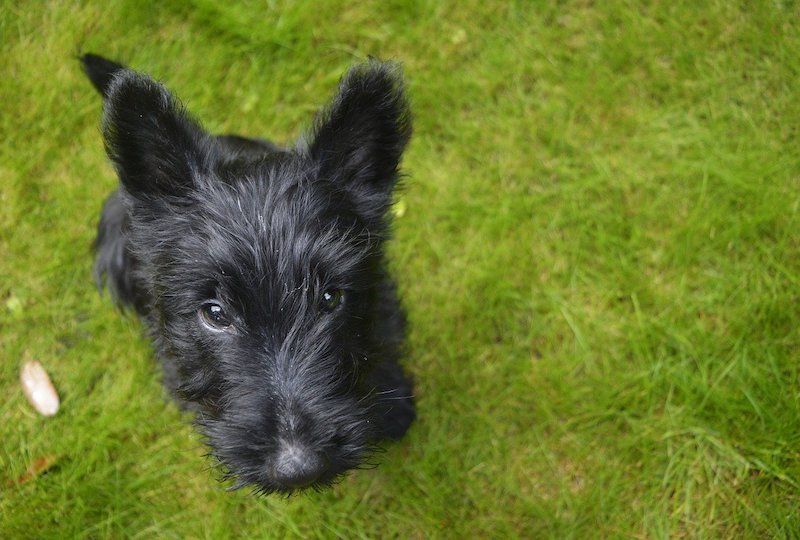 An affectionate and adorable mix of a Scottish Terrier and a Dachshund, the Doxie Scot is a designer breed with a wide array of potential traits. These dogs can be as little as 18 pounds and as much as 28 pounds, depending on the parent that they take after.

They also have a wide array of colors and coats, meaning that your Doxie Scot is likely to have a more unique appearance than many other designer breeds. But despite their varied appearance, their personalities are remarkably similar.

Loving, energetic, and extremely loyal, these pets form a strong bond but typically with only one owner. With so many extraordinary traits, it’s not hard to see why Doxie Scots are so popular. But are they right for you or your family? Keep reading, as we break down everything that you need to know before adopting.

Doxie Scot Puppies — Before You Buy

A post shared by The Hamilton Floor Doctor (@the_hamilton_floor_dr)

There’s no doubt that Doxie Scots are an energetic breed, but don’t mistake them for a jogging companion. Instead, these are dogs that need tons of love and attention and preferably a companion or two. However, since these dogs are a bit shy, that means early socialization. Otherwise, your Doxie Scot might be a bit too temperamental for a new pet in the house.

Still, these dogs are extremely intelligent, if a bit stubborn. Some Doxie Scots are a breeze to train, while others are next to impossible. It all depends on which traits they inherit from each parent. But these dogs are usually extremely healthy compared to other dog breeds, and they have a longer lifespan than larger breeds.

Still, keep in mind that the adoption fees from the breeder are only part of the upfront cost. You’ll still need to pay for medical care, food, collars, leashes, toys, and more. Once you factor everything in, you can expect to spend anywhere from $2,500 to $4,000 in the first year.

1. Doxie Scots usually only bond with one owner

While there’s no rule saying that a Doxie Scot can’t tightly bond with more than one owner, the reality is that after they bond to one owner, they’ll rarely bond to someone else. They’ll be nice to everyone else, but you’ll undoubtedly notice that they have a favorite someone whom they listen to a bit more.

2. Doxie Scots are intelligent but tough to train

Both Dachshund and Scottish Terriers are extremely intelligent breeds, so it’s no surprise that the Doxie Scot is smart too. However, both those breeds can have a bit of a stubborn streak. They’re certainly trainable if you know what you’re doing, but they’re not for the faint of heart or first-time dog owners.

3. Doxie Scots are sensitive to their owner’s emotions

While every dog can pick up on their owner’s emotions to a certain degree, Doxie Scots are more adept than most. This means when you’re talking with them and training them, you need to keep an upbeat attitude. But it also means you might get a few extra cuddles when you’re feeling down.

Temperament & Intelligence of the Doxie Scot

Doxie Scot’s are extremely intelligent dogs, but they most definitely have a stubborn streak. They also tend to be a bit moody and to pick up on their owner’s emotions. So, when you’re feeling a little perky, you might notice that your pup has an extra pep in their step too.

These dogs are incredibly loyal, energetic, and lovable. Still, don’t mistake these dogs as jogging companions, as their small legs can’t keep up with a fast pace. They make great alarm dogs because they tend to bark at new people, but they’re not overall yappy and won’t bark at their own shadow.

Doxie Scots can be more than a little temperamental and moody, so it’s best to avoid the breed if you have small children. Also, keep in mind that while Doxie Scots can be friendly with multiple people in the household, they only form a strong bond with one.

So, if you’re looking for a dog that will spread the love out with everyone and not pick a favorite, a Doxie Scot isn’t ideal. Still, if you have older children and want a companion that’s not going to leave you when the kids head off to college, the Doxie Scot can be a great choice.

Just be sure to spend the time bonding with your new pup early on — that way, they won’t bond with one of the kids before you.

The Doxie Scot does great with other pets — as long as you socialize them early. That’s because Doxie Scots can be a bit timid and moody, and without early socialization, this can lead to problems.

So, if you’re wondering whether a Doxie Scot puppy will interact well with other animals already in your house, they probably will. But if you’re thinking of adding a new pet and your older Doxie Scot has never spent much time around other pets, you might run into problems. While this isn’t uncommon for any dog, it’s especially prevalent with Doxie Scots.

Things to Know When Owning a Doxie Scot

The last thing that you want is to adopt a new member of the family only to realize that they’re more work than you were expecting or that there were tons of things that you didn’t know. That’s why we broke down everything that you need to know about the Doxie Scot here.

While Doxie Scots don’t have a restrictive diet, it’s essential to keep them at a healthy weight. This is because the longer back that they inherit from their Dachshund lineage makes them prone to back problems, especially if they’re overweight.

This means tailoring their diet to their actual weight. Since they can range from 18 to 28 pounds, the amount of food that they need varies too.

Stick with the amounts that the food manufacturer recommends based on your specific pup’s weight, and consult a vet on what and how much you should feed them.

Doxie Scots are high-energy breeds that do well with multiple walks a day, but you need to be careful with the pace that you set. While they prefer a brisk walk, they have small legs that limit how fast they can go.

We recommend two 30-minute walks a day, and you need to set a decent pace for both. It’s a great incentive to get out more often, but it’s also a big-time constraint, so keep that in mind before adopting.

When training a Doxie Scot, you need to keep an upbeat attitude the entire time. While this can be a little annoying due to their stubborn nature, they’ll shut down if they sense a ton of frustration from you.

This makes Doxie Scots a tough choice for first-time pet owners. Moreover, when training a Doxie Scot, use a reward-based system with treats and praise because this will help keep their attention. However, use low-fat treats to keep your dog at a healthy weight.

However, there’s no guarantee that a Doxie Scot will be hypoallergenic because Dachshunds certainly aren’t. Dachshunds can have three different coats: a smooth coat, a longhaired coat, or a wirehaired coat. Smooth coats are easy to take care of, while longhaired dachshunds require daily brushing. Wirehaired coats require weekly brushing with more extensive grooming several times throughout the year.

While the size of a Doxie Scot will vary drastically depending on their parentage and which breed they take after, males still tend to be a bit larger than females. Males also tend to need even more attention and companionship than females.

Finally, unless you plan on neutering your dog, it might be more difficult to housetrain a male dog, even though females can be a bit more stubborn. That’s because males are prone to spotting and marking their territory through urinating. However, neutering your dog usually will help with this.

While Doxie Scots can be a bit of a handful, especially in inexperienced hands, they’re a loving and adorable breed. So, if you’re up for a challenge and want a pet that’s loyal, intelligent, energetic, and caring, then a Doxie Scot might be just what you’ve been looking for.

Just know what you’re getting into. This way, you won’t be in over your head with a high-energy and stubborn breed.

We have more Dachshund Mixes for you to peruse!