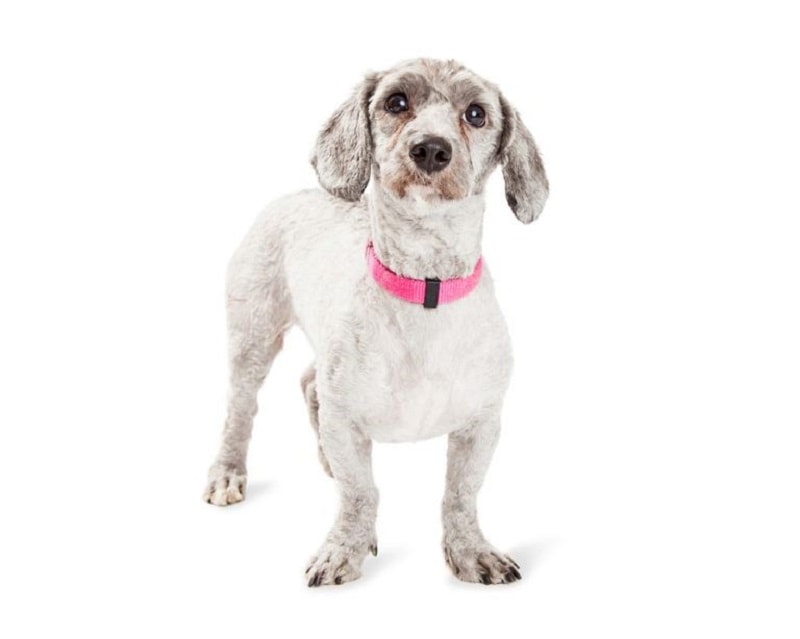 The Doxiepoo also called the Doodle, Doxiedoodle, Dachshundpoo or the Dachshunddoodle is a cross between the Dachshund and the Poodle. He is a medium-sized cross breed with a life span of 10 to 15 years. He commonly takes part in competitive obedience and agility and is an especially popular mixed breed in the Southern States of America.

Where does the Doxiepoo come from?

The Doxiepoo is usually a mix of the Poodle and the Dachshund but sometimes can also be the puppy of two Doxiepoo bred together. This is a mixed breed or designer dog with a huge variance in appearance and temperament so it can be hard to predict. The assumption is that breeders are trying to get the best from two or more breeds but genetics does not always comply so be make sure you meet the dog before you buy it. Even within one litter, you may get a dog that looks more like the Dachshund and one all curly like a Poodle.

The Poodle we see today seems to have been born to a life of luxury but in fact, he was bred as a working dog. The poodle comes from the German word pudelin or pudel which means splashing in the water. Poodles were water retrievers, they went into the water to retrieve waterfowl such as ducks for their owner who has just shot them. Indeed the Poodle is not originally French as most think but German. However, he did come to France and it was there that a lot of breeding went on to create the Poodle we know today. The three sizes all had a purpose there, the French used the standards as water retrievers still, the miniatures to sniff out truffles, and the toy poodles were adored by French aristocracy and carried as companions.

Today he still has a dignified look to him and can be wary of strangers but once he warms up to you he is surprisingly playful and mischievous. He is a very clever dog and is one of the easier ones to train because he is always so keen to please you. He makes a great family dog and does not like being left alone for long periods. He is loyal and loving and fun.

This dog was bred in Germany too, but this one was for hunting. While his name means badger hunter, in fact, he hunted other animals too including the fox and the wild boar. You can see them being referred to as far back as the 15th century. There were different sized Dachshunds for different hunting purposes. In the 18th and 19th centuries, they were refined further and were able to hunt above and below ground. In Great Britain, they were bred more to be companions too and became popular over Europe in royal courts. He came to America in 1885 and became popular there before World War I. Because of their link to Germany during and after the war, their popularity declined though. By the 1950s they were back again though.

Today in England and American they are considered to be companions but in other parts of Europe, they are still used as hunting dogs. He is clever, brave, sometimes rash, energetic, and sometimes stubborn. They love to cuddle and can be very entertaining. His personality can vary from gentle and calm, all the way up to troublemakers!

The Doxiepoo is a clever dog sometimes mischievous and very affectionate. He adapts well and antics will either have you laughing or getting quite cross! When he is not entertaining you he is usually a friendly dog, a great family pet, social and easy-going. He gets on well with everyone but he can be stubborn sometimes and does like to dig.

As mentioned there is a lot of variety with the Doxiepoo in how he might look. Usually, he is small, sometimes he gets a long body like the Dachshund’s but sometimes he does not. Sometimes he gets a coat like a Poodle’s sometimes it is like the Dachshunds. His average weight is 5 to 30 pounds and he can be toy size up to a medium-sized dog. His coat can be short or long, straight through to curly, and colors include red, black, brown, white, and tan. He has short legs and a round head with a short snout. His ears hang down and his eyes are usually black and bright.

How much exercise does the Doxiepoo need?

He has moderate exercise requirements since he is small. Take him for a walk each day, or a trip to the dog park. Remember to add in some playtime with him either in the yard if you have one, or in the home. Exercise for this dog is important because he loves his food, will charm treats out of you, and then can easily gain weight if he is not also moving.

This is a tough one because they can vary so much in temperament. If he is more like a Poodle he will be fairly easy to train as they are eager to please and will listen. Dachshunds on the other hand while still clever get distracted so easily and have a stubborn streak sometimes which means when training you may run into some snags occasionally. Socialization and training though are very important to get a well-rounded dog so just remember to stay patient, be firm, but be positive. And use their love for treats against them!

Does he have high grooming needs?

Another hugely varied answer depending on their coat. He has moderate grooming needs, if more like a Poodle he needs daily brushing to remove debris and may need a professional groomer to clip now and then. He may also need trimming by one if he is long-haired. If like a Poodle he may shed less, if like the Dachshund he will be a moderate shedder. Bath him just when you feel it is needed to keep the natural oils in his coat healthy.

His teeth should be brushed regularly, ideally daily but at least two to three times a week. His ears will need checking and cleaning once a week too to avoid ear infections. When he is at the groomers getting his coat done you may want to ask them to also cut his nails for you, some dog owners do not realize there are live blood vessels in the lower part of them, so cutting too low is not good.

He is not a natural with children, pets, or other dogs. Socialization early on with him is important to help with this. He is moderately good to good with children, though the older ones are better. He is not so accepting of other dogs and may need to be slowly introduced. Other pets like cats unless he has grown up with them, he may see them as prey and try to hunt them!

He is an adaptable dog, so can live in an apartment with no yard as long as he gets outside each day for a walk. He can be territorial and visitors need to be introduced to him so he gets used to them. He is a barker, training can help a lot with this issue, but it will not stop him completely. If you leave him alone for long periods he will probably bark a lot of it and annoy any neighbors you have. He is good in moderate climates but not any kind of extreme temperatures. He should be fed 1 to 2 cups of dry food of good quality each day, divvied into two meals.

While he tends to be a healthy dog the fact is both Poodles and Dachshunds have several genetic problems that the Doxiepoo could inherit. These include back problems, epilepsy, bloat, deafness, diabetes, Addison’s, eye problems, patellar luxation, hip dysplasia, and skin problems.

Costs involved in owning a Doxiepoo

The puppies themselves are not the most expensive designer breeds but there is a range depending on how reputable the breeder is, whether any medical tests have already been done, popularity, and where you are. You can pay something between $250 and $800. He will need a collar and leash, a crate, a carrier bag, and other essentials that will cost about $200 – $250. He will need medical tests and procedures done if they have not already been such as having a microchip put in, neutering, blood tests to check his health. That will be about $270 – $350. Annual medical costs for things like vaccinations, tick and flea prevention, general check-ups, and pet insurance will cost about $460 – $600. Annual non-medical costs such as a license, long hair grooming, food, toys, training are about $675 – $800.

Looking for a Doxiepoo Puppy Name? Let select one from our list!

This is a lovely dog for the right people if you are prepared to train him, as the barking and the naughtiness can get out of hand! A well-rounded Doxiepoo will be a great companion whether you live in an apartment or a house, and while not the easiest dog in the world to look after, will be worth the love and time spent on him.