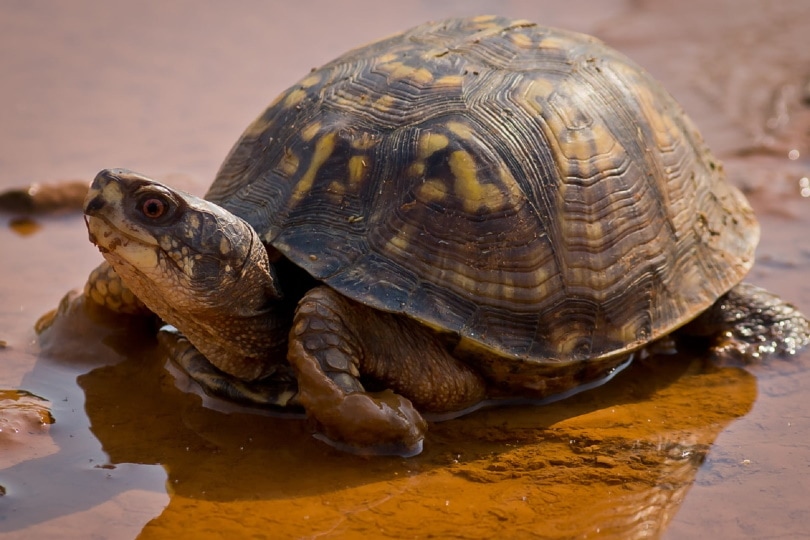 The Eastern Box Turtle is native to the eastern parts of the United States. They are a subspecies of the common box turtle. While they aren’t technically a tortoise, they are primarily terrestrial. They don’t spend much time in the water in the least.

Due to the widespread and gradual decline, their status was downgraded in 2011.

As a pet, the Eastern Box Turtle is pretty easy to house. They don’t require much work and are pretty straightforward to care for. However, they do have a very long lifespan, so you must be prepared to take care of them for their whole lifespan. You will likely be taking care of them for much of your life.

They are incredibly adaptable to home environments, which makes them a good option for many different owners. They are suitable for beginners and experienced reptile owners as well.

They typically have high-domed shells and bright yellow and orange. This makes them look unique when compared to other turtles.

Because of their wide adaptability, they don’t need particular tank setups.

How Much Do Eastern Box Turtles Cost?

These turtles can cost anywhere between $140 to $360. This is largely because of their low reproduction rate. They don’t have very many babies each year, which often causes their price to rise substantially. We recommend meeting the breeder before making your purchase. You may be able to purchase a turtle from a pet store, though many do not carry them.

Breeders will often be able to provide the best advice when it comes to these turtles. Plus, they often know how to raise babies properly. This ensures that the turtle is adequately taken care of, which helps ensure that they are healthy.

These turtles are active during the day. In the wild, they would naturally spend this time foraging for food. Of course, in captivity, this is not necessary. They don’t prefer handling very much, as this causes stress. When completely stressed, these turtles will retreat into their shell. This is their natural resistance to predators. If they are afraid that a predator might injure them, they will hide.

It is still important to encourage tameness with frequent handling. This should be gentle and mostly for the turtle’s benefit. You want them to be calm if they need to be handled more extensively, like due to illness. This also helps minimize stress during cage cleanings.

Many owners report that these turtles are quire social and don’t mind being watched by their owners. However, they also seem to have some unique personality traits, so not all turtles will be as outgoing as others. Often, they will learn to recognize their owner or those that feed them. It isn’t uncommon for them to beg for food when they see people.

Some may play with toys, so you may wish to furnish them with a small ball and similar toys.

Their high, dome-like shell defines these turtles. They have a total shell closure, which means that their shell is completely closed on one side. Some color variation does exist, but only slightly. Usually, they are brown or black with a yellow or orange pattern. All turtles are unique, though, with their one-shell patterns. Some males have blue patches on their cheeks and other areas. However, this is rare and only present in some turtles.

When scared, these turtles can completely close their shells. They can pull hinged sections of their shells over the openings, which makes them effectively enclosed in bone. Their shell is not removable and is permanently attached to their body.

The shell does have some capacity to regenerate. Over time, the damaged areas will fall off as the new tissue grows. The shell continues to grow over the turtle’s lifespan.

How to Take Care of an Eastern Box Turtle

These turtles need quite a bit of room to roam. For hatchlings, a 20-gallon tank may be suitable. However, as the turtles get older, they will need a much larger tank. It should be at least 4-square-inches and be at least 18” tall. You can also keep them outside if the climate is appropriate. Outdoor enclosures are ideal if they can muster it.

If you keep the turtle outside, ensure that the pen is protected from predators and harsh weather. There should be sunny spots and shady spots. All plants should be turtle-safe, and pesticides should be avoided.

The turtle should have access to plenty of hiding spots regularly. They like loose litter for burrowing, which they will do quite often. A shallow pan of water should be provided at all times. Remove the dirty substrate weekly when you clean the tank.

These turtles prefer a sunny spot to bask in that is between 85- and 88-degrees F. There should also be a shaded area that is around 75 degrees F. The temperature should never drop below 70 degrees F, even at nighttime. If it becomes colder like that outside, you should remove the turtle and bring it inside with the appropriate enclosure.

Some natural outdoor light is best for these turtles, as it helps them make vitamin D. However, you can also use a UVB bulb indoors to meet this need. The lightbulb should be on for at least 10 to 12 hours a day. You’ll likely need to change the bulb every six to nine months. Follow the results of your light for the best results.

The humidity should be maintained to at least 70% at all times. You can achieve this indoors with daily misting. This will help it more closely resemble the forest floor. A shallow pool of water should be provided to increase the humidity of the enclosure.

Use bedding that mirrors the natural environment of these turtles. Mulch and moss-type substrate are best, as it helps maintain moisture. You can even mix two different substrates. The substrate should be deep enough for burrowing, especially in shady areas.

Do Eastern Box Turtles Get Along with Other Pets?

These turtles can often live with other turtle species. However, besides that, they will eat just about everything else, including fish and amphibians. You can keep them with other turtles as long as all their needs are adequately met. You should avoid putting them with turtles of many different sizes, as this can cause severe problems with competition.

These turtles are best kept separate, but you can keep them with other turtles if you are cautious.

What to Feed Your Eastern Box Turtle

In the wild, these turtles eat a large variety of food. They are opportunistic and eat anything that falls into their path. In captivity, their diet should be as close to a healthy diet as possible. They should eat about once every 24 hours. Half of their diet includes veggies, fruit, and grasses. They tend to like things that are brightly colored, like red bell peppers.

Everything else in their diet should be a low-fat protein source, like earthworms, slugs, snails, and mealworms. They can eat low-fat dog food and lean meats, but these should be included only occasionally. Younger turtles usually need more protein because of their rapid growth. Older turtles aren’t growing as much, so they need significantly less protein.

A shallow pan of water should be provided to allow these turtles to wade in the water as they see ft. However, they tend to leave droppings in the water, so you will need to refresh it daily.

These turtles require quite a bit of commitment due to their long lifespan. Routine vet care is essential to ensure that they are growing correctly and consuming the correct diet. A vet visit should be done at least once a year with an exotic animal vet. If your turtle lives outside, parasitic exams should be done as well. This is the most common health problem these turtles face. Symptoms include abnormal feces, but no symptoms at all are the typical pattern.

Respiratory infections are also common, especially if their environment is too dry. Labored breathing should be seen by a turtle quickly, as it can be severe. Cold can also cause this problem, though in a less severe manner.

They can also develop problems with their shells, such as rot and ulcers. If their shell starts smelling strange, you should check them with your vet as well. Usually, this is due to a poor diet or unsanitary habitat.

Once these turtles are comfortable, they are often not aggressive. They should be given plenty of hiding spots to prevent them from feeling overly exposed, which can cause aggression. Aggression can be a sign of discomfort, and therefore illness.

They typically breed in the spring through fall. After a good rain, the males will become active in their search for females. They do not mate for life, so they often mate with many females at a time

In captivity, they breed similarly. Keeping them outdoors is the best way to achieve this, especially if you live in that area. Their breeding in the wild should be done with responsibility. They may not eat as much when trying to mate and will likely devote much of their time to mating. These turtles can be a bit anxious when breeding, so things should be kept remarkably calm.

Are Eastern Box Turtles Suitable for You?

These turtles are generally pretty easy to take care of, but they require significant amounts of space. You should have plenty of space available to take care of these turtles, especially if you’ll need to keep them indoors. Plan on having more room than you may think they need. They can thrive in a tank when little, but they quickly outgrow it and need quite a bit of room.

For this reason, we recommend these turtles for beginners and experts alike, as long as you have enough room. They do need to be fed daily, but this should not take an extensive amount of time.