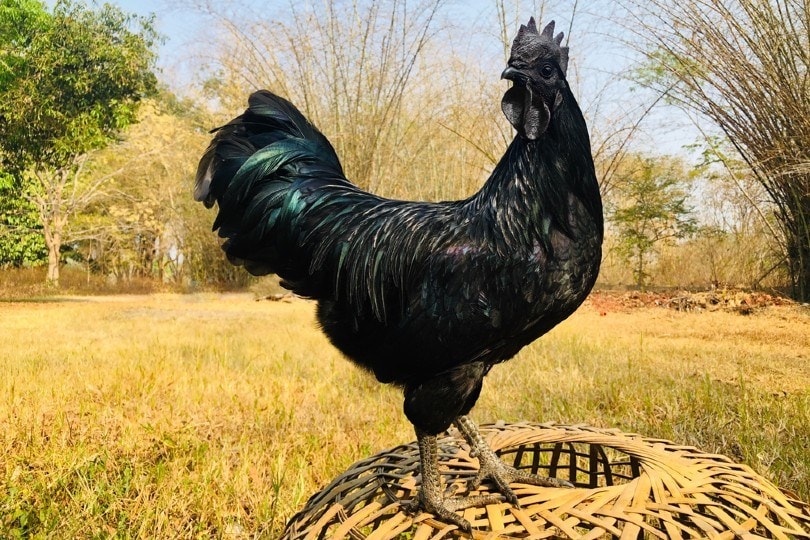 Considering that there are nearly 26 billion chickens in the world, it can be hard to wrap your head around the fact that there is such a thing as endangered chickens.

Unfortunately, there are. For various reasons, some chicken breeds are slowly dwindling into oblivion. Fortunately, unlike the Siberian tiger, an endangered chicken is much easier to save, as almost anyone can do it.

Whether you are looking to add to your flock or simply you’re doing research, the following are eight of the most endangered chicken breeds in the world.

Nevertheless, this unique trait might just be the reason why there are so few of them. Their abnormally large legs make them too clumsy, with hens often stepping on and breaking their eggs. It also does not help that the Dong Tao is a poor egg layer, producing a maximum of 3 eggs on a good week.

Therefore, if you leave them to their own devices, you will be lucky to get a few eggs from this bird every month. This is why Dong Tao breeders are vigilant about collecting the Dong Tao’s eggs as soon as they are laid and then taking them to an incubator.

The Dong Tao originates from Vietnam, where it is highly valued for its meat. Hens weigh around 10 pounds on average, while roosters can weigh up to 13.5 pounds.

As you can imagine, Dong Taos are absurdly expensive, with a breeding pair costing around $2,500.

This chicken breed has been christened “the Lamborghini of poultry.” Like its car counterpart, the Ayam Cemani is beautiful, mysterious, and beyond the reach of most people. How expensive, you ask? A breeding pair will set you back at least $5,000.

In their native home of Indonesia, Ayam Cemanis are considered sacred birds due to their unique physical attribute; they are all black!

When we say that the Ayam Cemani is a black bird, we are not talking about just its plumage, but everything, including its skin, meat, organs, and bones. While the Ayam Cemani’s blood is not black, it is exceptionally dark. It is easy to see why they are used for rituals in their native home.

Breeding this bird is not easy. Ayam Cemani hens leave a lot to be desired when it comes to laying eggs, typically producing only around 80 eggs annually.

The name “Onagadori” means “Honorable Fowl.” This beautiful Japanese chicken breed is so revered in Japan that it was awarded the prestigious title of “National Treasure” in 1952. Nonetheless, despite the Onagadori’s status, it is estimated that there are only 250 of its kind left in Japan.

When it comes to physical attributes, the Onagadori is exceptionally beautiful, sporting a tail that can be up to 4 feet tall. This means that they require more attention to keep their feathers in good condition, with most owners perching their bird’s tail so that it does not drag on the ground.

The Polverara is a medium-sized Italian chicken and is believed to be one of the world’s oldest chicken breeds. It sports a beard, a crest with a V-shaped comb, white earlobes, and small wattles. They typically come in either pure white or inky black.

Due to their striking appearance, Polveraras are typically kept as show birds. Nonetheless, they are decent egg layers, producing an average of 150 eggs per year. Additionally, they also make great table birds, with their meat being highly sought-after due to its delectable taste.

Despite being developed relatively recently in Sussex, UK, the Ixworth is becoming rarer with each year, which is quite puzzling considering how commercially viable this breed is. The Ixworth is a dual-purpose bird, meaning that it is excellent at both laying eggs and meat production.

This bird can produce up to 200 medium-sized eggs every year as an egg layer. As a table bird, the Ixworth is renowned for its tender, tasty meat.

Ixworths are also incredibly sweet-natured birds with a love for human company, which is why they make such great pets.

The Golden Campine is an ancient breed whose history goes back to Julius Caesar’s times. It is believed that he owned a few of his own after looting Belgium.

Even though it might not be as productive as other commercial breeds, the Golden Campine is a great bird. Hens can produce up to 200 medium-sized eggs annually. Additionally, they are good table birds.

Originating from Germany, the Vorwerk is a dual-purpose bird whose numbers are dwindling. They make around 180 medium-sized eggs per year and have delicious meat.

Additionally, they sport a beautiful plumage, have a sweet disposition, and fend for themselves through foraging. Nonetheless, they are becoming rarer with each passing year despite all these wonderful attributes.

With its long legs, beautiful plumage, and graceful gait, the Modern Game is often referred to as the “Supermodel” in poultry shows. In fact, these birds are primarily kept as ornamental or show birds.

Unfortunately, their numbers are on a steep decline. This could be attributed to their inability to adapt to colder climates. Nonetheless, they are marvelous birds that would make a great addition to any flock.

Those are the top eight most endangered chicken breeds in the world today. It takes time and effort to develop any breed of domestic animal. Therefore, it is disconcerting to watch breeds that were once plentiful fade away into oblivion.