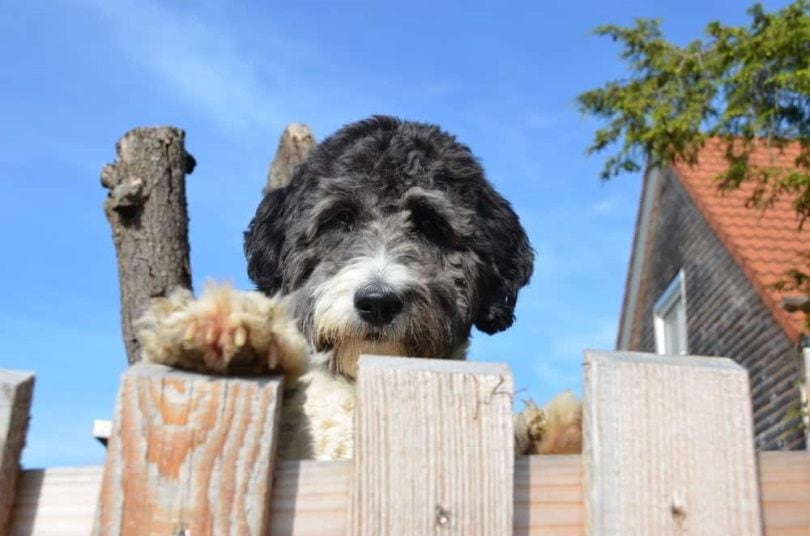 The English Boodle is a small to medium cross breed that mixes the Bulldog with the Poodle. He tends to live 10 to 12 years and is a designer or hybrid dog. He is a great companion dog known for being friendly and gentle, calm and attentive. He is also great for a lot of different people, families with children and apartment dwellers.

Where does the English Boodle come from?

As with many of these designer dogs they were first bred in America though no-one knows exactly by whom or when. The usual reason another breed is bred with a Poodle is to get dogs with coats that are low shedding and hypoallergenic. Some hybrids are created with thought behind them and purpose and a genuine desire to create a great dog that combines the best of two dogs. But some are just money makers for puppy mills and disreputable breeders who do not care about the health or happiness of the dog. To see the kind of dog the English Boodle could be we can look at the parent dogs, the Poodle and the Bulldog.

The bulldog was developed in England sometime in the 16th century as a bull baiting dog. Bull baiting was a sport practiced for sometime in those days, it was both a spectator sport and they thought it tenderized the meat. The dog was bred to be fierce, tenacious, brave, aggressive and strong. Despite their bloody background when bull baiting was banned some breeder saw potential in the Bulldog and started to work on developing him into something less aggressive.

Today the Bulldog is known as a friendly a gentle dog, sweet but still courageous making him a good watchdog. He can be stubborn but he is kind and gets along with everyone. He is a slow learner so training can take longer than for many dogs.

The Poodle was bred to help hunters of waterfowl like ducks. They would go into the water to retrieve them. Poodle like dogs can be traced back a couple of thousand years at least making them a very old breed. The Poodle is believed to have originated in Gaul or Germany as we now call it. When the French got hold of him he was bred into the Poodle we are more familiar with. There are three sizes of Poodles the toy, miniature and standard.

Today the Poodle is known for his intelligence, his aloof manner and his wacky looks. However he is also a great family dog, always wanting to keep his owner happy, easy to train and in fact while he may appear a bit snobbish he is in fact very playful and mischievous with his owners. He is very loyal and friendly and protective.

The English Boodle is loving and social and clever too. He is friendly and can be a very gentle making him a great dog to have if you have children and other pets. He tends to be quite a calm dog but can be destructive if left alone for too long, or if not exercised or mentally stimulated enough. He is affectionate and alert making him a good watchdog. He likes to be with people all the time. Sometimes he can have a stubborn side to him that he gets from the Bulldog.

He is a small to medium dog weighing 12 – 55 pounds and measuring 12 to 16 inches tall. He has a large round head with long ears that hang down. He has a coat that is usually short in length, is silky and can be anything from straight to curly. Common colors are black, red, tan, gray and brown.

How active does the English Boodle need to be?

The English Boodle does not need a lot of exercise to keep him healthy and happy usually. Some though might be more like the Poodle and need a bit more, but with their size it is still not a large amount. A couple of moderate walks a day and some play time, or one longer walk plus some play time is sufficient. If you have a yard that is great but it is not necessary as this dog can adapt to apartment living. Try to have a mix of activities to keep him stimulated and do not forget to exercise each day will improve his behavior and temperament as well as his health.

This is probably the one area he falls a little short on. He is not an easy dog to train, he is slower to learn than many dogs and you will need patience for it, or take him to a professional. For this reason he is not best suited to first time owners. If he is more like the Poodle he may be average at training, but more like the Bulldog and as well as not being as smart he can be stubborn. Be fair, positive, and firm. Be consistent too and keep the sessions shorter to avoid him becoming discouraged and you too! Early training and socialization are key to a puppy growing into a happy and well rounded dog.

Living with an English Boodle

He will have low to moderate grooming needs depending on his coat and much like a Poodle’s it is. It may need trips to a professional groomer to have it trimmed or stripped. But it is more likely to be hypoallergenic. He sheds minimally but daily brushing is still advised as his coat can easily pick up dirt and debris and should be brushed out. Give him a bath once in a while when he needs one using a gentle dog shampoo.

You also need to check his ears once a week. Dogs with floppy ears are more prone to ear infections so make sure everything looks and smells okay and wipe them clean. There are solutions you can use or you can just dampen a cotton ball or cloth with warm water. Do not go right into the ear. His nails will need clipping when they get too long. It is suggested that unless you have experience with this you leave this to the professional groomer also. Dogs have nerves and blood vessels in lower part of their nails. Finally like us dogs need their teeth cleaned for good oral health. At least three times a week, more if you can.

He is great with children, his laid back and gentle nature make him very trustworthy even with other pets too. Socialization and training help improve those great qualities though.

He is very adaptable and is fine is most moderate climates though either extreme is too much for him. He will need 1½ to 2½ cups of dry food a day. He should be fed it in two meals and it should be of good quality as this does make a nutritious difference. He loves food so do not leave out food for him to graze on as he will eat it all and gain weight.

Try to get a health clearance certificate for him as that will help avoid the sick dogs out there bred by puppy mills. You could also ask to see the parents health clearances. As the offspring of a Bulldog and a Poodle the potential inherited conditions include Addison’s disease, bloat, Cushings, epilepsy, eye problems, tail problems, skin problems, patellar luxation and hip dysplasia.

There is quite a large range in prices you can find for the English Boodle, from $300 – $2500. This just reflects the large range of different types of sellers out there so make sure to resarch and visit before buying. He will need a crate, a carrier bag, a collar and leash and some initial medical tests such as blood tests, shots, deworming, neutering and having a micro chip put in. This will cost about $455 – $600. Recurring costs such as training, a license, toys, food and treats will cost about $450 – $550 a year. Recurring costs such as medical visits, shots, flea prevention and pet insurance will cost about $460 – $550 a year.

Looking for a English Boodle Puppy Name? Let select one from our list!

The English Boodle is a lovely dog but he needs someone experienced with dogs so that they know how to train him correctly. He can live in an apartment and needs less exercise than some dogs so would suit people who have less active lifestyles. He is a calm and attentive dog so would suit a calmer family rather than a high energy one.