English vs American Labrador: Whats the Difference? (With Pictures) 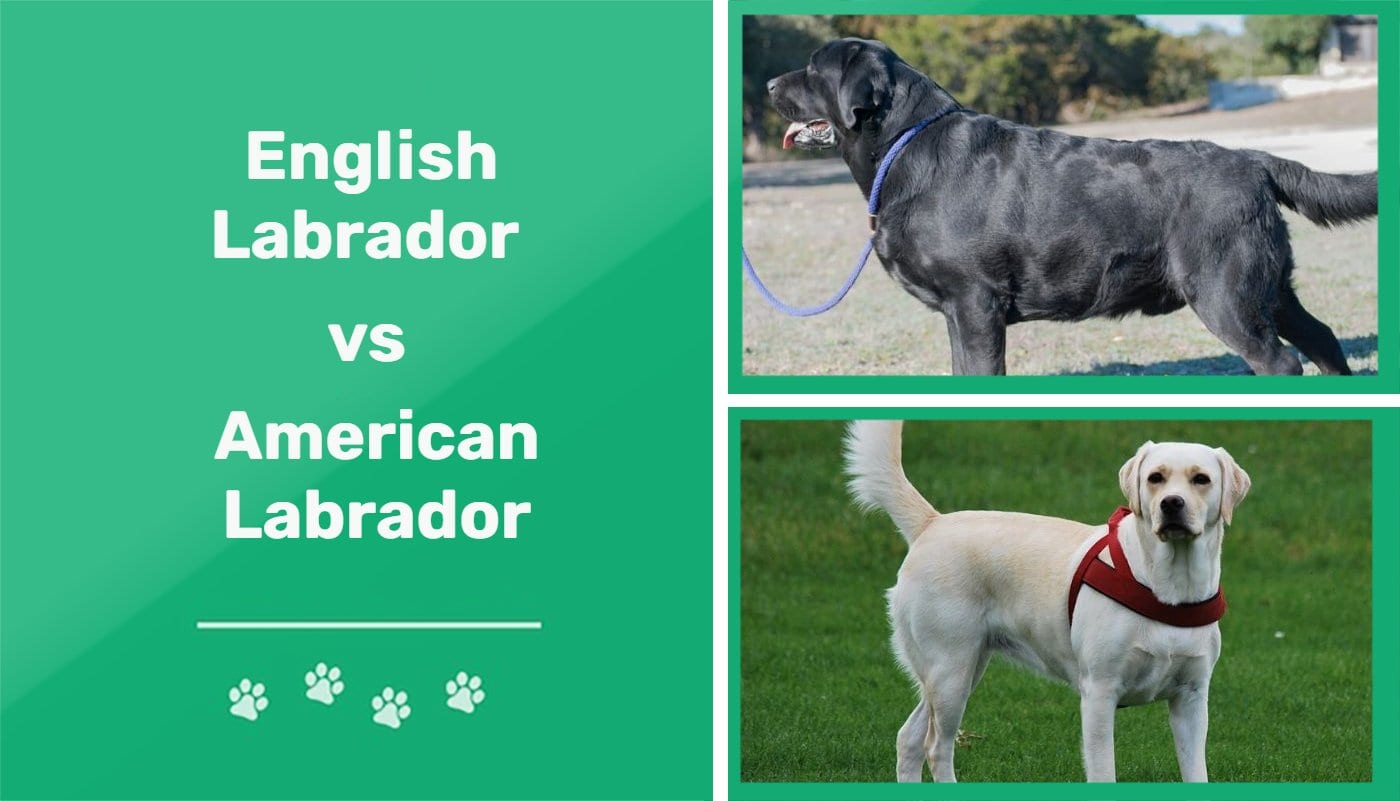 There are few dogs as similar as the English and American Labrador. In fact, they’re so similar, most kennel clubs actually recognize them as the same breed! But that doesn’t mean there aren’t differences.

We walk you through both dogs here, so you’ll be able to tell the two types of labs apart and have a better idea of which one is better for your home.

While these dogs are technically the same breed, there are visual differences between the two. For starters, the English Lab is generally shorter and stockier compared to the American Lab.

An American Lab might have a higher maximum weight when comparing two dogs with the same height, but it’s the English Lab that’s usually a little heavier.

It’s this stockier appearance with shorter legs that’s the main difference between an English and American Labrador.

English Labradors are show dogs through and through. It’s why they’re known as the “Bench” variety of labs and why you won’t see them out in fields. They almost always fit right in the kennel club’s acceptable sizes and ranges because that’s what breeders were looking for.

English Labradors are extremely intelligent and loyal dogs. They love to please their masters, and as such, they’re relatively easy to train as long as you stay persistent. Stick with positive reinforcement and keep the training sessions short.

If you want the best results, you need to ensure that your English Labrador is getting enough exercise. While they don’t have the same stamina that an American Labrador has, they’re still high energy and are prone to destructive boredom behaviors if they don’t get enough exercise.

With the English Labrador, it’s all about breeding specs. Therefore, they’re typically far more expensive, but it also makes it much easier to know what you’re going to get, even when they’re a puppy.

Pups that don’t fit squarely in the acceptable height, weight, and other dimension ratings by the kennel clubs don’t get bred, which means you get consistent physical results time after time.

The English Labrador is one of the most loyal and loving dogs that you can find. They’re affectionate and easy-going, and these traits make them great family dogs. They’re also extremely intelligent, so if you’re trying to train them to complete certain tasks, they make an outstanding choice.

Due to their lower exercise requirements, English Lab is a better fit for a family that doesn’t need a working dog or those who don’t want a running companion.

Still, English Labs need space, so you should have a fenced-in yard and give them plenty of exercise to keep them happy and healthy. Finally, they do good in noisy and busy households and do well with children of all ages.

The American Lab is all about work. You’ll find plenty of purebred American Labradors that don’t fit the ideal height and weight standards, but that doesn’t mean they’re not exactly what someone’s looking for.

Don’t expect to see an American Labrador on a show bench — expect to see them out working in fields. This is how they got their name as a “field” lab.

Since they’re working dogs, the American Lab has far more energy and stamina than an English Lab. When breeders were selecting desirable traits from the parent, they didn’t go with appearance, they went with things that could help out on the farm.

While an English Lab can get by with only about 1 hour of activity a day, if you own an American Labrador, you need to shoot for at least 2 hours of rigorous physical activity. It’s a much larger time commitment, but if you need a dog out in the field, then that’s exactly what you want!

Due to their high energy, loyal nature, and high intelligence, the American Lab is the perfect working dog. Just keep training sessions short, and keep in mind that your American Lab wants to learn. Once they realize what you want, you shouldn’t have any problems getting them to do it.

Just because the American Labrador is a working dog doesn’t mean they’re no-nonsense. They make great family dogs, and they love being in the thick of things. The busier the house, the better, and they’ll fit right in.

They’re loving and affectionate, and they do great in homes with kids of any age or size.

The American Lab is an excellent choice for those looking for a working farm dog. They also are excellent family dogs, but they have rigorous exercise requirements that can be challenging to keep up with.

They’re great with those with plenty of work for them to do or those with a busy lifestyle where they can take their dog with them.

Which Breed Is Right for You?

There’s no wrong answer here, but it’s all about how much energy that you want your Labrador to have. If you plan on having them as a family dog and not take them on runs rigorously or exercise them in other ways, the English Labrador is the way to go.

But if you want a dog with a little more energy or if you’re looking for a farm dog, there’s no doubt that the American Labrador is a better choice.

If you can’t get over the British/American thing, just call them Bench and Field Labradors. That’s what experienced breeders and handlers do, anyway!