How Big Do Ferrets Get? (Size + Growth Chart) 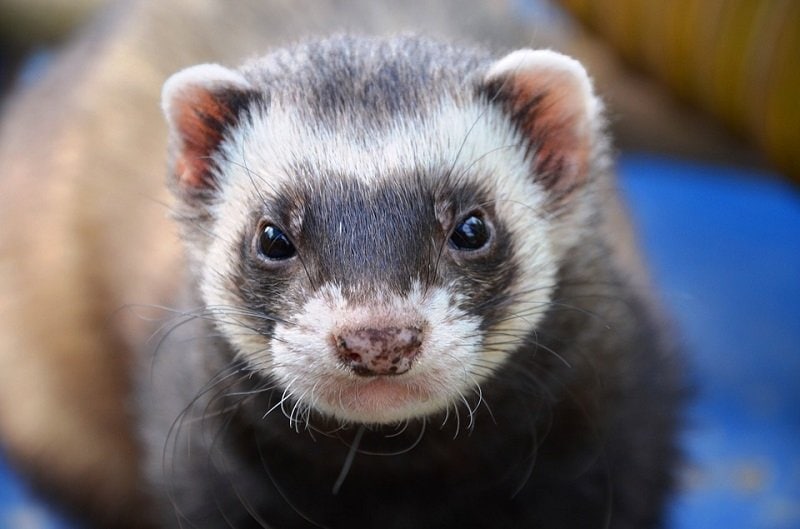 Ferrets are playful and fun-loving pets. These fuzzy little creatures are members of the Mustelidae family, which includes badgers, weasels, pine martens, and otters. Domesticated ferrets have quite a few differences compared to wild ferrets, but one similarity is their typical growth pattern.

Ferrets are often called the “jokers of the animal kingdom.” Male ferrets are called “Hobs,” and females are “Jills,” somewhat fitting names for these creatures of fun and laughter. They are sexually dimorphic, as males end up considerably larger than females when they reach adulthood.

Male and female ferrets are similar sizes when they are first born, though. Although they start off fitting in the palm of your hand, they grow rapidly within the first month of their lives. They only slow down when they hit 2 months of age.

Ferrets are mischievous and intelligent creatures, a somewhat dangerous combination when it comes to a household pet. You have to be prepared for the tricks that these furry creatures are prepared to pull and must “ferret-proof” your home to avoid catastrophe.

The scientific name for ferrets is quite descriptive: Mustela putorius furo. It essentially translates to “smelly weasel thief.” They are not named this way for kicks and giggles, but almost as a warning for people intent on adopting one. Be prepared for plenty of fun with a heaping side of mischief.

The positive aspect is that ferrets tend to sleep for up to 20 hours a day, and when they do, they sleep hard.

Ferrets are not rodents like many people think. That means while hamsters are cute and clean, ferrets have a musky odor no matter how fresh they are.

Perhaps you are ready to own a ferret or have already adopted one and want to track your ferret’s growth. We have graphs to help you track health progress, what to expect as they age, and what a healthy diet looks like as your ferret reaches adulthood.

Since ferrets are dimorphic creatures, their growth rates depend on their sex. Males and females start around the same size when newborns, but males grow faster within the first two months and continue growing more afterward.

You will likely notice the separation in a male’s growth rate from that of a female around 3 weeks old.

Around 3 weeks old, a female ferret’s growth rate tends to slow down compared to that of a male. Instead of doubling their weight from the previous week, they grow only about 25% more each week. As they age, their growth rate slows more and more.

Generally, female and male ferrets are about the same height. Males tend to be much longer, though, which is where most of their extra weight comes from compared to females.

When Does a Ferret Stop Growing?

Around 4 months old, ferrets will stop growing and reach their full size. Full-grown males should weigh between 2-2.5 pounds. Females often weigh between 1-1.5 pounds. It is at only 4 months old that they reach sexual maturity and can begin reproducing.

Be prepared for this time of their lives, and get them fixed if you don’t want them to breed. Female ferrets can die if they stay in heat for too long, and going to a vet or breeding are the only ways to take them out of heat. Males tend to get violent when they want to breed, with females, other males, and even humans.

A ferret ages quickly, and at around only 3 years of age, they will be at midlife. They tend to live for a maximum of 7 years.

How Does Spaying/Neutering Affect Ferret Growth?

If you do not intend to breed your ferrets, consider spaying or neutering your pets as a crucial part of their care. Many vets will recommend it highly, especially since it is well-known to extend their lifespans.

Spaying immensely helps females because they are prone to aplastic anemia if they remain in heat. Any ferret that is 3 months old or older can get surgically neutered. Jills should get spayed as soon as possible, so they don’t go into their first season of heat.

Since a ferret is mostly done growing around 3 months old, neutering them around this age does not risk stunted growth. They might suffer from hyperadrenocorticism or adrenal gland disease, but this is possible at any age and one of the few risks of neutering while the benefits are profuse.

Another way that ferrets stand out from the typical crowd as domesticated pets is their diet, as ferrets are obligate carnivores.

Raw meat is often the best for a ferret. You can also feed them kitten food, since it has a much higher protein content than cat food. It is best to feed them raw meat as a supplement to a diet of dried food to give them variety.

Every animal is different, although there are standards for growth. Be aware that just because your ferret isn’t growing at a specific rate, that doesn’t mean they are unhealthy. If you are afraid that there might be something wrong with your ferret, however, take them to a veterinarian with experience dealing with small animals.

Overall, feeding your ferrets a balanced diet and neutering them at about 3 months old allows them to live a healthy, long, and balanced life.