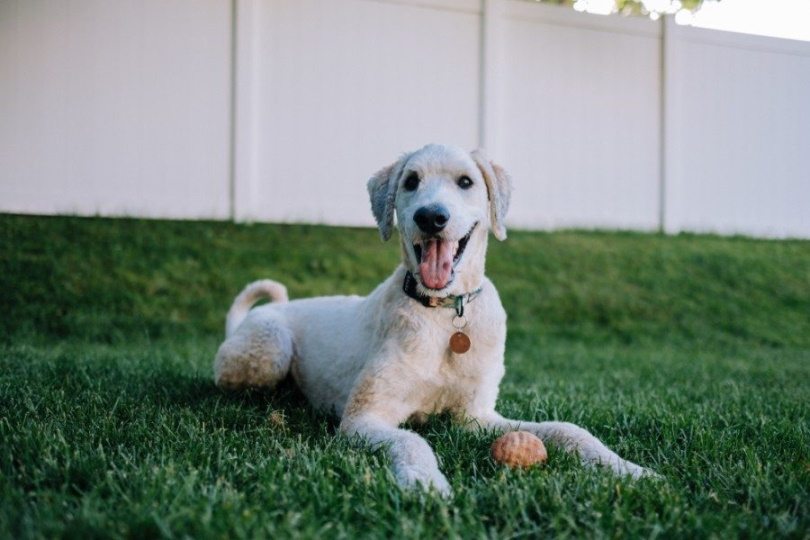 This is a large dog that is a cross of a Poodle and a Bouvier des Flandres. She takes part in agility in competitions and has a life span of 10 to 12 years. She is a very loyal and faithful dog and makes a great addition to the family. The Flandoodle is also known as the Poovier or the Bouvipoo and because of her Poodle mix could be a good choice for those with allergies. She is also an alert dog and can be a watchdog as well as a guard dog.

Where does the Flandoodle come from?

The Flandoodle is a hybrid or designer dog, part of a trend that began around 20 years ago, to cross different purebreds. Some have an intention or purpose behind them, some are just about making money. When you decide to buy a dog, and you opt out of a pure breed or a dog from the pound, make sure you really check out the breeder you are buying from as sadly there are a lot of disgusting practices out there. As with many designer dogs we do not have a history or story behind her breeding so we have to look to her parent dogs to get a sense of where she comes from, and what she might be made up of.

The name of this dog translates to ox herder from Flandres – Flandres being a place in Europe where this breed originates, in Northern Belgium. As the name indicates she was a farm dog used to pull carts, herd and guard cattle and aid with various other chores around the farm. Both World Wars had Bouvier des Flandres working as a sentry, messenger, and helping to find mines and ammunition. She came to America in the 1920s and was recognized by the AKC in 1929.

Today this is a strong willed dog but very intelligent and protective, often wanting to herd her family and protect them! She is very attached to her owner and is at her happiest when in the middle of whatever is going on. She gets bored when left alone for too long and this can turn into destructive behavior. While she may not be all over you to greet you when you come home she will show her happiness that you are back by laying at your feet when you sit down. She needs strong leadership and early socialization and training.

The Poodle was originally bred to be a hunter’s companion, sent to retrieve waterfowl from the waters. His coat was designed to protect him from the cold water and the trimmed areas made him lighter and prevented snagging. That was the standard Poodle’s role. The miniature when it was bred was used by the French to hunt truffles and the toy was a companion to the wealthy. While adapted and styled in France, his origins are actually German.

Today he is known for having a dignified air about him but he does have a playful and loving side too and is devoted to his family and owners. He is intelligent and will train easily and quickly, being happiest when his owner is happy. He does not like being left alone and can get separation anxiety.

The Flandoodle is a loving, loyal, gentle, faithful dog who can also be playful, energetic, alert and high energy. She is intelligent and protective of her family and loves to be a the center of attention and involved in any family activity going on. She is mild natured and dependable but can suffer from separation anxiety when left for long periods because of their need for companionship. Her hunting instincts may lead her to hunt smaller pets and birds outside so socialization and training early are key. She also needs socialization to prepare her for children and other dogs. She needs stimulation both physical and mental or she can get bored easily and turn to destructive behavior.

A Flandoodle is a large dog weighing 55 to 85 pounds and standing 22 to 28 inches tall. She is a strong and sturdy looking dog with a medium sized head that can be somewhat rounded and floppy ears. Her coat can be rough and harsh from shaggy to curly. Colors include brindle, black, fawn, gray and brown. She is a powerful dog compact but vigorous.

How active does the Flandoodle need to be?

She needs to be very active including 2 good walks a day as well as some play time. She should have access to at least a medium sized yard and she would also enjoy trips to the dog park, running, jogging, playing ball, Frisbee and so on. She needs mental as well as physical activities to keep her happy and well behaved.

The Flandoodle is not especially quick to train but she is not slower than other dogs either. It won’t require extra effort on your behalf compared to most other dogs, nor will it require less. Generally she listens well and as long as you are consistent and fair things should progress at a steady rate. Early socialization and training are key for all dogs in terms of better behavior and a more rounded personality.

She will have moderate grooming needs depending partly on the coat she has. Brush daily to take care of debris that can snag in it especially if it is curly. You may want to have it trimmed by a professional groomer now and then. She does not shed much and can be hypoallergenic. Bath her when she gets dirty, trim her toe nails carefully with the right equipment and not cutting too low, and brush her teeth at least three times a week. She should also have her ears wiped clean once a week. You can use just a damp cloth or cotton ball or there are specific solutions for the job.

She is not good for apartment living because of her size and energy though if she had to she could adapt if she was still given a lot of physical exercise. She is not much of a barker and will need 3 to 4 cups of high quality dry food each day, split into two meals. She can handle most climates though is best when not in either extremes.

When buying a puppy you should ask for health clearance certificates even for hybrid dogs. There are certain health issues the Flandoodle may be more prone to having inherited from the Poodle and the Bouvier des Flandres. These include Addison’s, bloat, Cushings, epilepsy, LPD, cancer, heart problems,
Patellar Luxation, hip and elbow dysplasia, eye problems and skin problems.

Costs involved in owning a Flandoodle

Puppy prices can range depending on if that hybrid is especially popular, location, the breeder’s reputation and many other factors. A range right now is between $300 to $700 per puppy. Other initial costs of collar, crate, leash, medical checks, micro chip, spaying will come to $450 – $550. Yearly costs that are non medical in nature covering food, treats, toys, license, training come to between $500 to $600. Yearly costs that are medical in nature covering vaccinations, check ups, flea prevention, pet insurance come to between $485 – $650.

Looking for a Flandoodle Puppy Name? Let select one from our list!

This is not a dog that is suitable for everybody, she is more suited to families with older children or no children, and people with active lifestyles. She is a smart dog though and will bring you a lot of pleasure and happiness and will always be faithful to you.