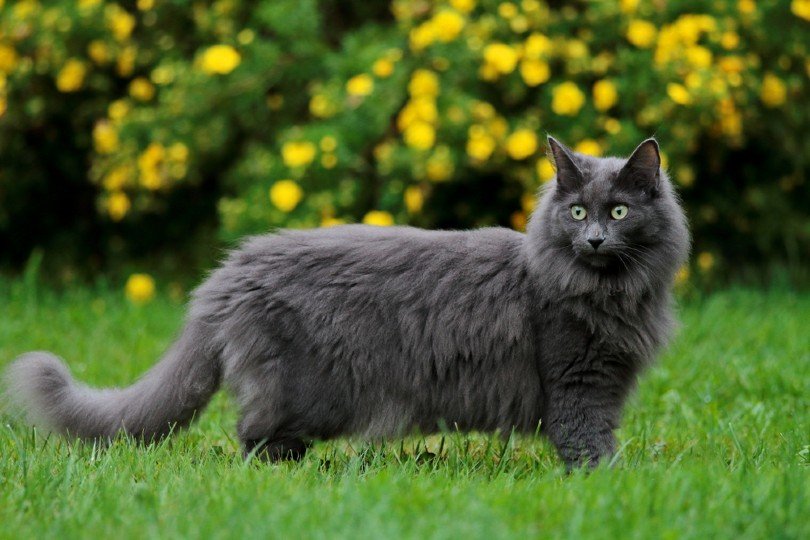 We’ll take a look at several breeds of extremely fluffy cats so that you can find the best cuddle buddy.

They are gorgeous cats with a fan club all their own. They do require quite a bit of extra care, though, as their coats need regular brushing. If you have the extra time, though, this is a suitable option for practically any family.

With a beautiful and thick coat, the Norwegian Forest Cat is exceptionally fluffy. They are huge and reasonably friendly, making them suitable family pets. They are better suited to colder areas due to their thick coats, though. They will also need to be brushed regularly, and you should plan to deal with quite a bit of shedding.

This is an ancient breed of cat. Their history goes back over a thousand years, originating in Norway.

This American breed is known for being extraordinarily fluffy and large. They adapted to living in the cold New England area. They are named “Maine Coon” because they were first recognized in Maine. They are now the official state cat.

This cat likely descended in some way from the Norwegian Forest Cat, though their full parentage is unknown. They are likely the descends of various cat breeds that were brought over with the first settlers.

This breed is known for their tendency to “ragdoll” when held. They go limp, in other words. Ragdolls are extraordinarily laidback and affectionate. They love to cuddle and are reasonably fluffy to boot. If you’re looking for a fluffy cat to cuddle with, this is potentially the best option for you.

They are great for families due to their extremely friendly nature. They often get along with children and other pets.

This is a relatively old cat breed. As their name suggests, they hail from Siberia, which is why they have such a thick coat. They are intelligent cats that love figuring things out, so they do well with problem-solving tasks, like opening doors.

Their coat thickens even more in the winter, but it becomes shorter and lighter in the summer.

Despite its name, this cat breed doesn’t have very short hair. It is pretty fluffy, even if it isn’t precisely “long-haired.” Many people refer to this cat as the “Lazy Man’s Persian” since this breed requires significantly less work than most other fluffy cat breeds.

If you’re looking for a fluffy cat, but don’t want to spend much time on grooming, then this cat may be a suitable option for you.

A Himalayan isn’t actually a cat from the Himalayas. Instead, this is a rather popular mixed breed that is a combination of a Persian and a Siamese cat. They have incredibly long hair like both of their parents and are rather fluffy. They also come in a vast array of colors ranging from blue to chocolate to cream. They come in many patterns as well.

While this is a mixed breed, they are pretty popular. Usually, it isn’t challenging to find one once you start looking.

If you’re looking for a fluffy shorthair cat, a British Shorthair might be the way to go. These cats aren’t fluffy in the traditional sense. They do have short hair, as their name suggests. However, they are very plushy, and the hair they do have is rather fluffy. They are loyal and affectionate, but they don’t mind being alone.

They are the perfect choice for many families due to their quiet nature. They aren’t the cuddliest cats, but many do love attention.

The Ragamuffin is similar to a Ragdoll. However, they shouldn’t be confused with each other. The Ragamuffin cat is enormous and has a medium-length coat. Their silky coat is naturally tangle-free, so they require minimum grooming.

They love their people and will follow you around. This breed was likely created by mixing various fluffy cats together.

Birman cats are very fluffy and lovable. They are perfect lap cats if that’s what you’re looking for. Usually, these felines are very people-oriented. They will follow you around the house and ask for attention—that’s just who they are.

If you’re looking for a cat to cuddle with, this is one of the better breeds. They aren’t particularly active, though they do enjoy playtime now and then. They’re laid back.