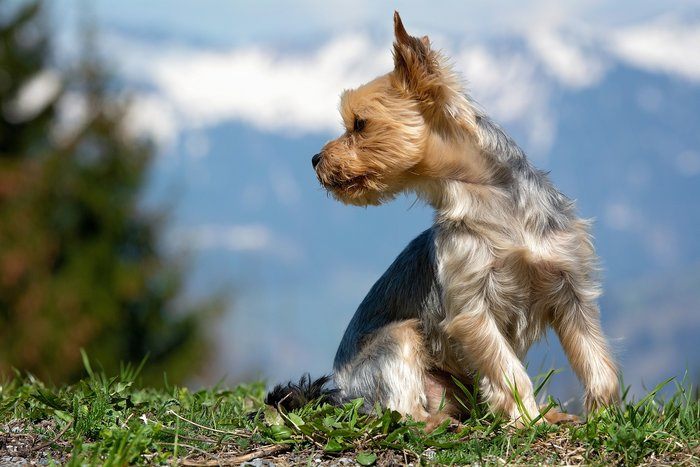 This is a small dog, the result of breeding the Yorkshire Terrier with a West Highland White Terrier. The Fourche Terrier can live for 12 to 15 years and takes part in guarding and agility events. He is a lively energetic dog as you would expect from a terrier with a stubborn streak that can make him somewhat obstinate at times! He is still a good family dog and a great option for apartment dwelling dog lovers.

Where does the Fourche Terrier come from?

In the 1990s it became a popular trend to breed two purebreds together to get an offspring that could epitomize the best traits of both parents. This is not a new thing to do, but the amount of new mixed dogs being created and named was a higher number than seen before. These offspring are mixed breeds so are not recognized by the Kennel Clubs and are called hybrids or designer dogs. Some designer dogs turn out great, some do not. Even within the same litter of the same crossing you can get a variety of looks and personalities in the puppies. The best way to get a feel for the mixed dog, in this case the Fourche Terrier, we can look at the history and traits of their ancestors.

The West Highland White Terrier also called the Westie, is thought to come from a 17th century small dog given to the King of France by James I. He originates from Scotland and was used for vermin hunting and other small critter hunting. In the past he has had several names including the Roseneath terrier and the Poltalloch terrier but in 1906 was recognized by the English Kennel Club as the West Highland White Terrier.

He is a fun, clever and bold dog as most terriers are! He loves simple things like food, a good rub and playing with his favorite squeaky ducky. His cheerfulness makes him a popular dog despite the fact he can also be terribly mischievous. He is friendly and loving to his family but not much for being a complete lapdog. He is a lively dog and while not aggressive, despite his size if challenged would not back down from a fight. He does not always respond well to same sex dogs, more female to female than male to male interestingly enough. Training and socialization are key.

The Fourche Terrier is an independent and lively dog, intelligent and inquisitive too. He is friendly and cheerful but has an independent nature that lead to obstinacy sometimes. He is alert so can be a good watchdog and he is protective of those he loves. And he can be very affectionate and loving too. He is not good without people around him and if left too long can suffer from separation anxiety. He is eager to please and that with his brains makes him a treat to train. Just watch for the stubborn streak. He is a good family dog but occasionally can suffer from small dog syndrome. Behavioral problems could occur if not trained and socialized from a young age. He will try to be pushy and be the boss. Do not let him.

He is a small dog at only 9 to 11 inches tall and 12 to 15 pounds heavy. He has a harsh, dense, thick coat that is brindle, gray, chocolate, cream, rust, black or tan in color with white patches on his chest, beard and toes. When he is not clipped he can start to look like a tiny sheep dog! He has a back nose with muzzles that are quite blunt and clear, dark, medium sized eyes. His ears are pointed and erect and he looks sturdy despite his smaller size.

How active does the Fourche Terrier need to be?

He is small but energetic and lively so he still needs a fair amount. A daily brisk walk plus some play time should be enough to keep him healthy and calm. Play some fetch at a dog park, have some activities for him to do indoors that also stimulate him mentally. A yard is a nice bonus, just make sure it is fenced in. However if you do not have one he will fine as long as he gets out still each day.

Training the Fourche Terrier should be nice and easy. He is clever, loves to make his owner happy, loves his food so responds well to using treats as motivation and reward. Most of the time owners find that he trains quicker than many other dogs as he needs less repetitions. But sometimes you get one who is especially obstinate and needs you to make it clear who is pack leader. Be firm but still positive. Avoid harsh training methods. Be persistent and stay calm. He really needs early socialization and training to make him well rounded and help him deal with things like kids and pets and different environments.

Living with a Fourche Terrier

He has moderate grooming needs overall. He does not shed much so is not much work keeping up with hairs everywhere and he is hypoallergenic. He does have a thick coat though that needs a lot of care to keep it from tangling and having lots of debris in it. Daily brushing will help and he may need to be trimmed at a professional groomers now and then. Toe nails will also need clipping and dogs have blood vessels in theirs so do not cut too low. Teeth will need brushing at least three times a week and wipe his ears once a week too. He should only need a bath when he gets really dirty.

He needs ½ to 1 cup of good quality dry food a day split into two meals. He can be good in most climates but extremes can be hard on him, on hot days he may need to be inside more and cold weather he may need a doggy sweater! He can be a moderate barker but if trained this can be contained.

He could inherit the following from his sires, Craniomandibular Osteopathy, LCP, lung problems, PSS, Patellar luxation, eye problems and hypoglycemia. To avoid health issues in your dog buy from reputable breeders and ask for health clearances.

The average cost of a puppy for this breed is $500 – $1200 but it will depend on where you live, who you buy from and the general health of the puppy. When you get him have him checked over by a vet who can do some blood tests, put in a micro chip, neuter him, deworm him and give him any shots he needs. You will also need a crate, carrier bag and collar and leash. This will cost about $360 – $450. Annual costs cover medical things like flea prevention, vaccinations, check ups, pet insurance, and non medical costs like toys, food, treats, license and training. This comes to between $700 and $950 a year.

Looking for a Fourche Terrier Puppy Name? Let select one from our list!

He is a clever dog, easy to train (as long as you can get over the obstinacy) and full of life and happiness. Make sure you are ready to play with him and give him a good walk each day and he will be loving and entertaining in return.