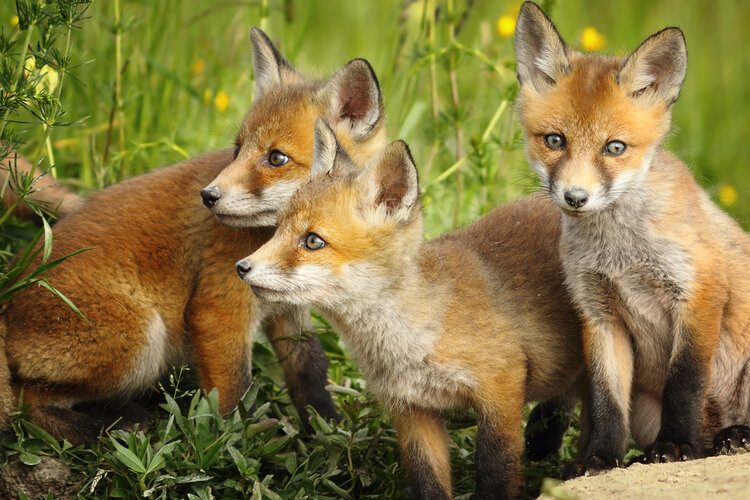 In places where foxes have been hit by outbreaks of mange, their numbers have been decimated. But is that the case across the world? The truth is that foxes are doing incredibly well as a species worldwide. But that doesn’t mean that every fox population is growing or stable. To find out the truth, we’re going to have to dig a bit deeper and look at the populations of different fox species.

To some people, a fox is a fox. But in truth, there are many different types of foxes and they’re all drastically different from each other. You’re almost certainly familiar with the red fox, and you’ve probably heard of an arctic fox before or seen one at the zoo. But you might be surprised to find out that there are actually 37 different species of fox!

In reality, only 12 of those fox species are considered to be true foxes. All of them are canids from the same animal family and they’re technically foxes, but only 12 are of the Vulpes genus.

Some of the other foxes you might be less familiar with include the Pale fox, the Fennec fox, the Pampas fox, the Crab-eating fox, or the Cape fox, which still only represents part of the entire fox family.

What Fox is Most Prevalent?

Of all the foxes on earth, the red fox is by far the most common and widespread. They’re found in practically every region on earth, except for the northernmost arctic areas where arctic foxes prevail.

Red foxes have been introduced to several countries where they’re not natively found. Where this occurs, they become an invasive species, destroying native animal populations and multiplying in number.

When a few red foxes were introduced to Australia for hunting purposes, it only took 100 years for them to spread out across the entire continent and take over. Now, they’re an invasive pest that’s crushing the local bird, reptile, and mammal populations. It’s estimated that there are over seven million red foxes in Australia alone.

Even though red fox populations have taken massive hits, such as the 95% reduction of the fox population in Bristol, the UK, due to a massive outbreak of mange, they’re still thriving as a species worldwide. However, it’s nearly impossible to gauge their numbers with populations spread across all the continents and most of the different environmental regions of the earth.

Though red foxes are doing excellent, not all of their cousins are faring as well. If you give a quick check of the endangered species list at the International Union for Conservation of Nature (IUCN) website, you can tell that there a few species of fox that aren’t in as safe of a position.

The Island Fox is considered to be near threatened. Approximately 4000 individuals remained when last assessed in 2013, though the population appears to be increasing.

Darwin’s Fox is the only fox species that’s listed as endangered. Unfortunately, the Darwin’s Fox population is continuing to decrease. There are only an estimated 659-2,499 individuals remaining worldwide as of 2016.

The Hoary fox is listed as near threatened. There are between 9,840-19,200 remaining individuals worldwide as of the last assessment, which was in March of 2019, though the population is currently decreasing.

All other fox species are listed as being of least concern at this time.

So, the big question; how many foxes are left in the world? The truth is, there is no definitive answer. There are too many species of foxes that cover too much of the globe. They’re in practically every environment and region across the entire world. Populations are exploding in some areas while disease ravages the populations in other places. Altogether, this makes it pretty difficult to gauge the species as a whole. But one thing is for certain; foxes are in no danger of going extinct any time soon.

If you’re worried about foxes going extinct, your fears are unfounded. Only one species of fox is currently considered endangered, with just two more species listed as near threatened. All the other species are thriving. In fact, red foxes are the most wide-spread and prevalent carnivores on the planet, and they’ve even colonized new homes as their own in the last century, ensuring that they’re here to stay for the foreseeable future.