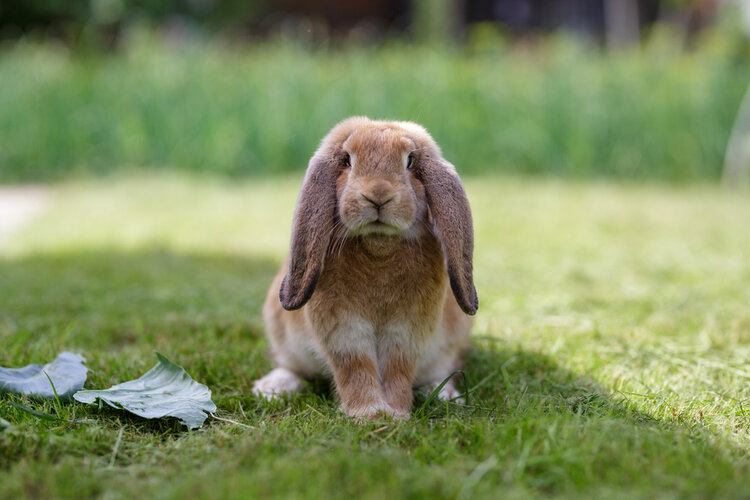 If you’ve ever loved the sight of a bunny with floppy ears, you likely have the French Lop to thank! Lacking the comically oversized ears of its English Lop forebears, the Frenchie has been sire to the extremely popular Holland Lop and other lop-eared minis.

Though originally developed as a meat rabbit, the French Lop has an endearing personality and unique appearance that make it a favorite of home pet owners and rabbit breeders alike. Whether you’re considering one for your home or just reading up on its history, the French Lop is a fascinating rabbit.

Let’s take a look together at all the information you need to know about this historic rabbit breed!

History and Origin of the French Lop Rabbit Breed

In 1850s France, the French Lop was originally bred as a cross between the show breed English Lop and the now-defunct Giant Papillon breed, also known as the “Giant French Butterfly Rabbit”. By mixing the giant’s straight-eared genes with the ridiculously long-eared English Lop, the large and muscular French Lop, whose ears drooped just below its chin, was produced.

While it was originally intended to be used for meat production, but they soon developed a reputation for their calm and gentle nature. This would lead them to be taken up as house pets and show animals, especially once lop clubs began appearing around North America in the 1970s.

As the heir to two rather large breeds of rabbits, the French Lop is most noticeable for its impressive size, often weighing well over 12 pounds. Their commercial body type lends a thick, muscular structure to their bulk, with roughly proportionate width and depth.

Of course, it would be impossible to talk about any Lop breed without mentioning their ears! The French Lop has set the standard for lop-eared length in most breeds that have been developed in the past 50 years, with the tips of its ears hanging just below its chin. By moving away from the exceptionally long ears of the English Lop, the Frenchie has made lops much easier to care for in the home – and much less prone to injury from stepping on their own ears.

Available in no less than 8 color groups, and with a palette that ranges from black to white and everything in between, French Lops can be found in an amazing variety of coats. This variation in combination with their docile nature has led them to be a popular choice for breeders looking to introduce new colors of coats into existing lines.

Clean water and a constant supply of timothy hay will keep just about any rabbit in good health, but ensuring a steady supply is absolutely necessary for French Lops (and any other giant breed). Being so much larger than many other breeds, their energy requirements simply to move around can be much higher and require more available food.

Dark, leafy greens given daily will help keep your lop’s vitamin and mineral levels healthy, as will a daily feeding of high nutrient kibble. Keep in mind that fresh hay should still make up the bulk of any rabbit’s diet; larger breeds seem to have a tendency towards ignoring hay if they’re given too many other foods.

Breeds descended from giants can probably get away with being fed treats of fruits, vegetables, and flowers slightly more often than smaller rabbits… But as always, give these foods in moderation and avoid plants, fruits, and veggies that could be poisonous.

With any larger breed of rabbit, make doubly sure to give them plenty of room in their enclosure to move around freely. While French Lops fair well both indoors and out, it’s vitally important to always give them enough space to exercise so that their joints remain healthy.

The coat of a French Lop is rather short and manageable, requiring only once-weekly grooming for most of the year. Even during shedding season, brushing just twice a week with a special rabbit brush (not just any old pet comb) will be enough to keep them looking in tip-top shape.

Don’t be surprised if your French Lop ends up enjoying their grooming so much that they begin to bother you for more! Be on the lookout for gentle nudges while you’re standing still or sitting on the floor to indicate that they’d like your pets and affection, or more grooming.

As the gentle giants of the lop world, French Lops have a fantastically calm and kind demeanor. Much of the day, you’ll find them engaging in their favorite activities: Lounging and relaxing. Their large size lends them towards being more okay with being handled than small rabbits, though you should be cautious of having small children around their powerful back feet.

Final Thoughts on the French Lop

With a signature appearance, gentle demeanor, and fantastic variety of coat colors available, the French Lop makes a unique and wonderful pet. If you have the room for this rather large breed in your house, it will repay you with love, affection, and companionship for years to come.